The “Little Pink Church” is Back 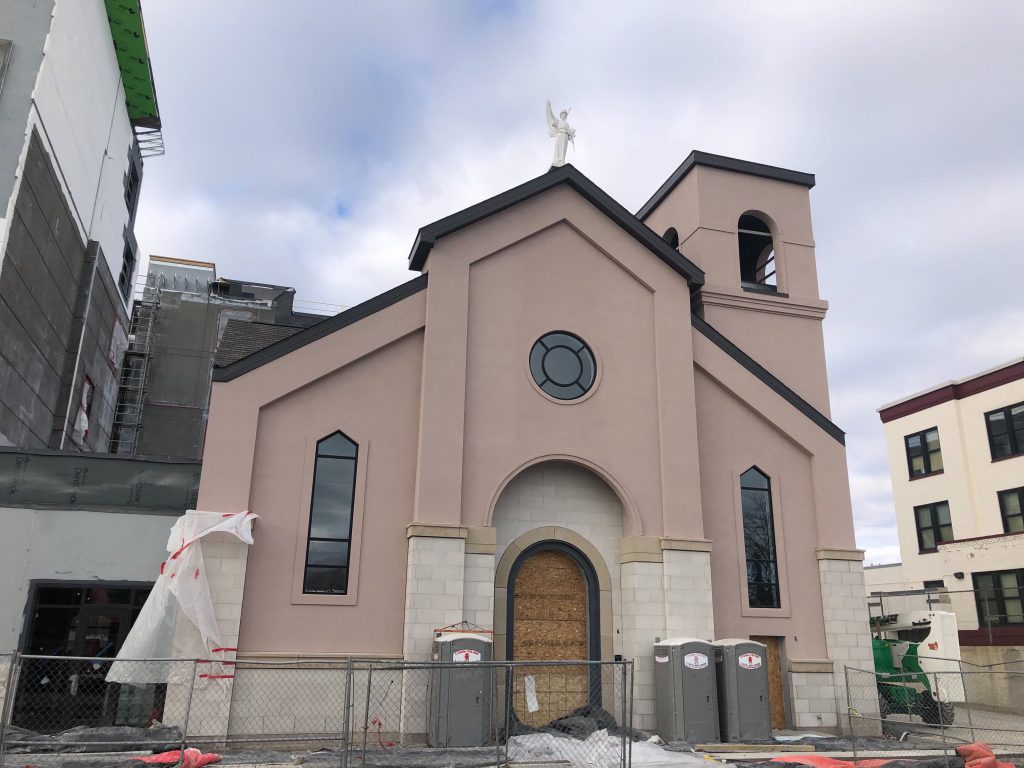 St. Rita Square, a 118-unit senior housing complex, is rising on the Lower East Side and with it a modern version of the long-gone Blessed Virgin of Pompeii Church.

Developer James A. Tarantino is developing the six-story complex on the site of the former St. Rita Catholic Church, itself founded as a mission of the former Blessed Virgin of Pompeii congregation.

Tarantino’s Capri Senior Communities will own and operate the market-rate senior living facility. The 118 units will include 72 independent living apartments, 20 assisted-living apartments and 26 memory-care apartments.

In exchange for acquiring the site for $1, Tarantino is constructing a new church and will sell it back to the Archdiocese of Milwaukee for $1. The new church, designed as a homage to the “Little Pink Church” in the Historic Third Ward that was demolished in 1967 for Interstate 794’s construction, will be utilized by the Three Holy Women parish led by Reverend Tim Kitzke.

Artifacts from both churches, Pompeii and St. Rita’s, including stained glass windows, will be installed in the new church. Parishoners will also enjoy a fully handicapped-accessible church that won’t require climbing a set of stairs to enter the sanctuary. Many of the Pompeii artifacts have spent decades in storage with the Milwaukee County Historical Society.

One of those artifacts, an eight-foot-tall bronze statue of Gabriel, is already visible to passersby. Sculpted in 1904, the year the pink church was constructed, it had been on the top of St. Rita since 1969. It now rests atop its third church.

In February 2018, Tarantino told the City Plan Commission that there were more people interested in residing in the complex, which will have a heated connection to the church, than there are units available. The market is now putting that to the test. With the complex set to open in early 2020, “reserved” banners have begun to appear in various units.

Tarantino’s firm had to acquire more than just the church and former school to create space for the development. In December 2017 an affiliate of Tarantino & Co. paid $660,000 for a home and vacant lot at 1612-1618 N. Van Buren St. In April 2018 Tarantino acquired the former church rectory, then an apartment building, for $700,000. The developer also paid $56,000 for the city to vacate the alley that bisected the site, with the city scheduled to use the funds to construct a new alley access point along N. Cass St.

General contractor Pepper Construction is building the new complex. The new complex is being designed by AG Architecture. Financing is being provided by Citizens Bank and Park Bank.

A series of changes to the complex’s design, including the materials used and the relocation of the church bell tower, were approved in December 2018. 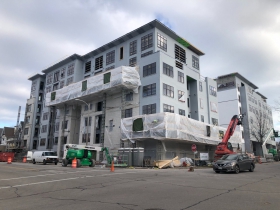 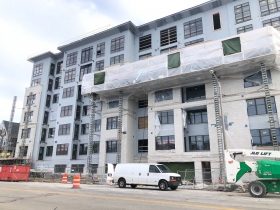 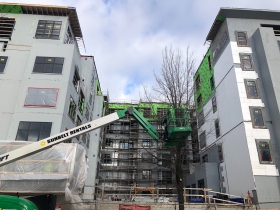 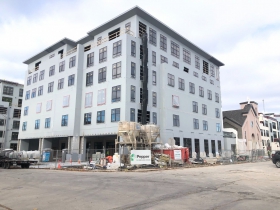 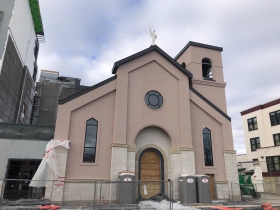 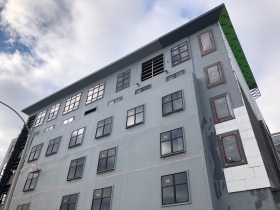 The site of the long-gone Third Ward church, located at the end of the Interstate 794 Jackson/Van Buren off-ramp, is also poised to see new life.

The city will use $100,000 in incremental property tax revenue generated by the development of the Huron Building to support a refresh of the county-owned Pompeii Square park. The site, technically located across N. Jackson St. from where the church stood, today consists of a small plot of grass between the two elevated freeway structures with a small memorial.

“Part of the funding is to finalize what this would look like,” said Department of City Development economic development specialist Dan Casanova in July when the proposal was up for consideration. “Right now there is not even a path from the sidewalk to get to the memorial, so there are some basic things that could be done.”