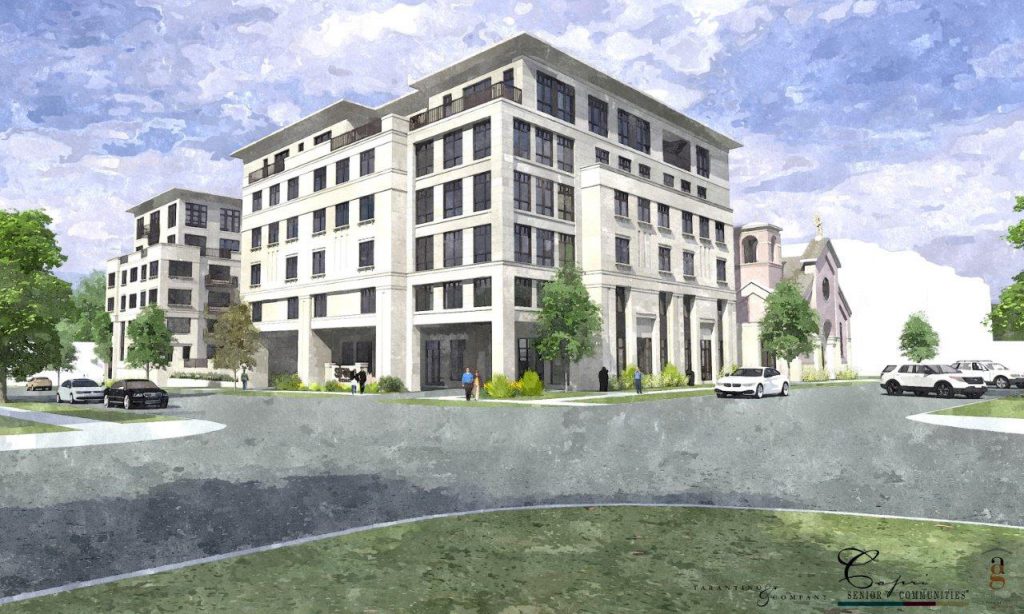 A zoning change for a proposed 118-unit senior living facility and new St. Rita’s Catholic Church was recommended for approval by the City Plan Commission. Developer James A. Tarantino is proposing to purchase and demolish the existing church and a handful of other structures to create two six-story buildings and a church that draws heavily on the design of the long-since demolished Blessed Lady of Pompeii Church.

Tarantino & Co. would buy the church and its former school and convent for $1, demolish the existing structure, construct the senior living facilities and church and sell the new St. Rita’s back to the Catholic Archdiocese of Milwaukee for $1. The existing church was built in 1925 as a mission church for Blessed Virgin of Pompeii. 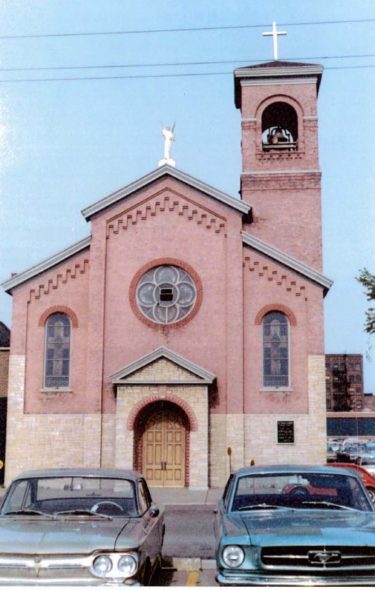 The new church’s design will borrow heavily from the former “Little Pink Church” in the Historic Third Ward. The original church was demolished for the construction of Interstate 794 in 1967. St. Rita’s became the de facto church of the Scillian community following the demolition.

The new building will include stained-glass windows from St. Rita’s and artifacts from both churches. The sanctuary will be built level with the street. This will come as a notable improvement over the current St. Rita’s, which requires parishioners to scale stairs to enter the building.

The senior living portion of the development has now been split into two buildings. The original plan, unveiled in April, included the building running from N. Cass St. to N. Van Buren St. It will now split mid-block, which allows for an interior plaza and second-story green roof for memory care residents.

Tarantino’s Capri Senior Communities will own and operate the market-rate senior living facility. The 118 units would include 72 independent living apartments, 20 assisted-living apartments and 26 memory-care apartments. The complex will be staffed around the clock.

The commission spent more than an hour Wednesday morning debating the redevelopment of the southern half of the block bounded by N. Van Buren St., E. Kewaunee St., N. Cass St. and E. Pleasant St. on the city’s Lower East Side. The only serious issue the commission raised was with the material choice.

“The direction we gave to our architect is we wanted to create an Italian Mediterranean look,” Tarantino told the commission.

According to project architect Eric Harrmann of AG Architecture, the building facades will contain a mix of stone and stucco. Harrmann said that generally the first four floors will be clad in a stone material, while the top two floors, which are to be recessed, will be clad in a “simulated stucco EIFS product.” EIFS, an acronym for exterior insulation finishing system, is a material commonly associated with big box stores and fast food restaurants.

EIFS is both cheaper and lighter than other options, and generally discouraged by the Department of City Development because of concerns about how it ages. “Did you consider any way to minimize that?” commissioner Whitney Gould asked Harrmann. The architect said that doing so “would have a very costly impact.” The building would need to be reinforced.

“My point is that the EIFS material, the long-term durability of that has yet to be demonstrated. Since you’re trying to create a very long lasting building, I wonder about the wisdom of that,” said Gould. Harrmann responded that “there is a way to use simulated stucco very cost effectively, and there is a way to use it without getting the cracking and the peeling.”

Area alderman Nik Kovac, who held a neighborhood meeting on the project in June, said that alongside DCD representatives they had pushed that no EIFS be used on the first floor. “They have really taken a lot of our comments to heart,” said the alderman. He supports the project and was pleased EIFS was removed from street level.

Commissioners unanimously recommended the zoning change for approval. “I think that it’s going to be a destination spot for people to worship,” said commissioner and area resident Stephanie Bloomingdale.

To assemble the site the developer will have to acquire more than just the church. In December, an affiliate of Tarantino & Co. paid $660,000 for a home and vacant lot at 1612-1618 N. Van Buren St. Tarantino told the commission he has the apartment building at 700 E. Pleasant St. under contract for purchase. That building, the former church rectory, is owned by Brian Glassal and was last assessed for $454,000.

The developer will also pay $56,000 for the city to vacate the alley that bisects the site, with the city using the funds to construct a new alley access point along E. Cass St.

Tarantino hopes to begin construction this summer, with the new buildings opening in late 2019. Tarantino intends to hire Pepper Construction to lead the project’s construction.

Tarantino told the commission there are already more people interested in residing in the complex than there are units available.

Rev. Tim Kitzke, the church’s pastor for the past 18 years, supports the project. He briefly addressed the commission, joking that if he went longer he would instinctively begin passing a collection plate. He says the new church will be smaller, but an improved layout will allow more seating.

The alley vacation, zoning change and parcel assembly will next go before the Common Council.

The location and design of the complex’s parking was an issue according to Kovac and the developer. The proposal now seems to over-compensate for any concerns and will likely reduce the daytime street parking usage in the area.

A small parking lot on the site will be eliminated with the development, but a replacement is in the works. In partnership with the adjacent Milwaukee Public Schools‘ Cass Street School, the developer is proposing to fence off 40 parking stalls on the current Cass Street Playground. The full block site, which includes a traditional park, tennis courts, paved baseball field and basketball court, would be converted in part to a weekday parking lot for teachers and school staff and a Sunday parking lot for church goers. The paved baseball diamond on the site’s northeast corner would be converted to the parking lot.

The proposal has the support of Kovac, who noted that the site was used for parking this weekend when the city declared a snow emergency. Cass Street School employees today park on the street.