7% of state population but 21% of charges. Cannabis “the drug of the privileged”?

By Gretchen Schuldt, Wisconsin Justice Initiative - Dec 3rd, 2019 12:16 pm
Get a daily rundown of the top stories on Urban Milwaukee

The analysis included cannabis cases filed in each of the state’s 72 counties.

The figures demonstrate “that marijuana prosecutions impact more heavily on the African American population,” even though African Americans and whites use marijuana at about the same rates, said Craig Johnson, an attorney and board president of Wisconsin Justice Initiative.

The disparity “clearly points to another reason for legalizing it,” he said.

There were 8,697 Circuit Court cases that included misdemeanor or felony cannabis charges, the analysis shows, and African Americans were defendants in 1,846 of those cases.

American Indians / Alaska Natives also were over-represented among those facing cannabis charges. Members of that ethnic group account for about 1 percent of the state’s population, but 5 percent of cannabis defendants.

Where the busts are.

The black/white racial disparities in those latter two counties, however, were bigger than in any of the other 70 counties in the state.

In Dane County, African Americans account for just 5 percent of the population but were 68 percent (85 of 125) of cannabis defendants, for a disparity of 63 percentage points, the largest in the state.

In Milwaukee County, 27 percent of residents are African-American, but blacks accounted for 85 percent – (244 out of 288) – of cannabis case defendants, a gap of 58 percentage points, the state’s second highest.

Those figures, Johnson said, shows that cannabis “is kind of the drug of the privileged.”

There are some areas, he said, “where marijuana has sort of de facto legalization.” Those areas are generally whiter, wealthier and more liberal, he said.

“My gut feeling is your over-policed communities end up with more charges,” he said. “So we have unequal protection under the law.” 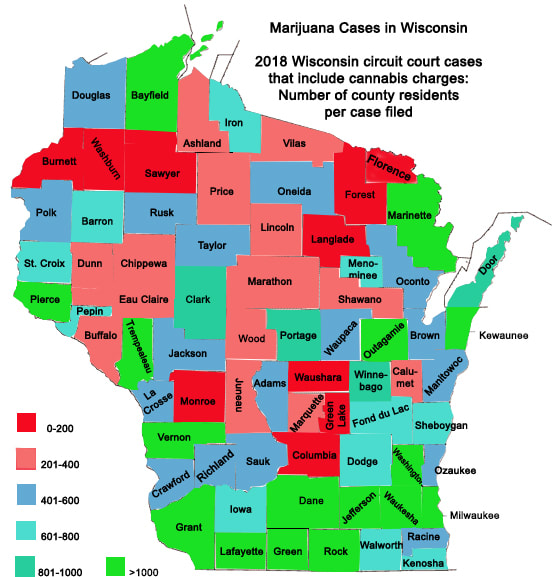