With a side of Loretta Lynn. “Thanks A Lot” should make any list of Top 10 songs of thanks. 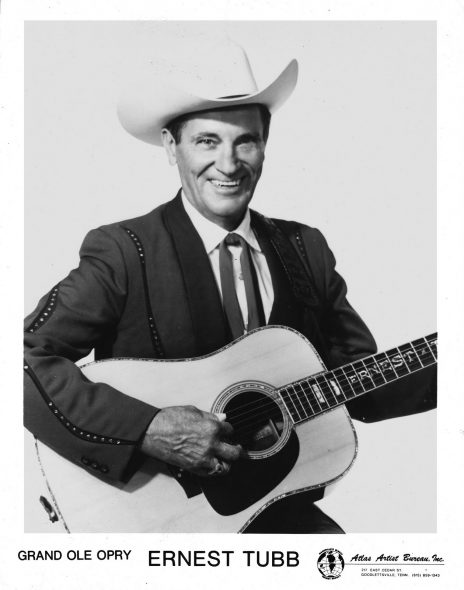 Ernest Tubb. Photo is in the Public Domain.

My high school art teacher had a unique standard for judging sculpture. He said, “If you roll it down a hill and nothing breaks off, it’s good.” Simple as that. That applies to songs with just one little modification: If you roll one down a hill and stuff breaks off and it still works, it just shows you didn’t need all those extras in the first place. This philosophy had to be a core belief of the Texas Troubador, Ernest Tubb.

“Thanks A Lot,” my nominee for any list of Top 10 Thanksgiving songs, already has the unnecessary stuff broken off and deep sixed. It’s stripped down and funny. It goes well with turkey, gravy, mashed potatoes and stuffing because it hasn’t gotten above its raising.

Ernest Tubb, a man with possibly the greatest name ever, inspired certain friends of mine to come up with their own flattering adjective and utilitarian fixture or appliance combos. But “Loyal Fridge,” “Steadfast Toaster,” and all the others fell well short of greatness. Ernest was a huge, foundational country star from the early 40’s through the 50’s, 60’s and beyond. His bands, which featured the best musicians Nashville had to offer, included legendary producer/pianist Owen Bradley and steel guitarist Buddy Emmons, and others. They knew the gig though, and saved their prodigious chops for other occasions. This guy wrote “Walkin’ The Floor Over You” after all — his songs didn’t need a lot of notes.

To our modern ears, everything about this track seems be right-angled. The country shuffle was still on the horizon when he began recording, so the basic two-step rhythm — a polka when you analyze it — was king. Ernest would be laughed off shows like “The Voice” or “American Idol,” but that would be a badge of honor when you think about it. Try concentrating on the stentorian Tubb’s basso profundo vocal and you’ll notice he’s singing a pretty darn good melody. And melody, my friends, is where it all begins. Then there’s his singing style, a deep rumble, so deceptive in its expressiveness, that isn’t much appreciated in this era except when coming from the likes of Leonard Cohen or Johnny Cash.

After the pie, coffee, and “Thank you, Lord,” it’s back to the kitchen for clean up duty. Who doesn’t enjoy a mountain of dirty dishes that includes every glass, bowl, plate, pot, pan and cookie sheet you ever owned? And of course they now feature a grease-soaked carbon crust that’s been baked on at 4,000º Fahrenheit. You could wait till morning, but if you play the second half of this video, where Loretta Lynn appears out of nowhere to sing “Who’s Gonna Take Your Garbage Out?” with Ernest, you might find the energy to attack that stack. And if you burn off a couple calories doing it, no one will blame you for sneaking one last piece of pie to replace them. It is, after all, Thanksgiving.