But company, state vague on details, number of jobs to move from Denver.

By Corri Hess, Wisconsin Public Radio - Nov 25th, 2019 03:50 pm
Get a daily rundown of the top stories on Urban Milwaukee 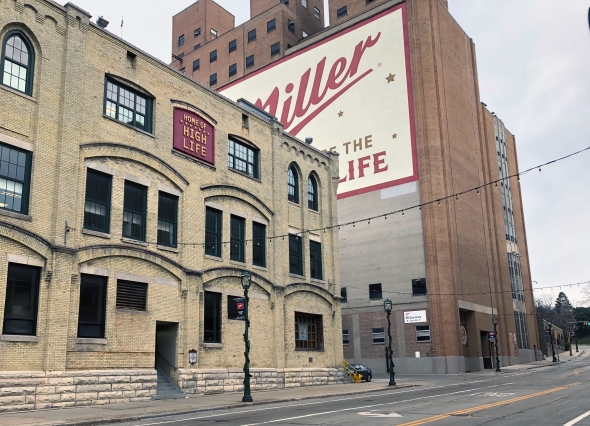 The Miller brewery in Milwaukee. Photo by Corrinne Hess/WPR.

The parent company of MillerCoors is planning to move office jobs from Denver to Milwaukee by June 2020 as they continue to find ways to compete in the changing brewing industry.

Local, state and company officials gave a brief update on Molson Coors’ plans Monday during a press conference at the Miller brewery in Milwaukee.

They offered no new information, however, on the exact number of jobs coming to Milwaukee, or how much the state would be providing in tax incentives to bring those jobs to the city. 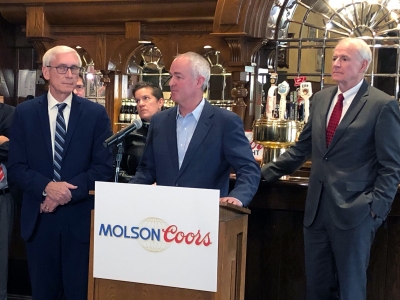 When repeatedly pressed by reporters for a number, Molson Coors CEO Gavin Hattersley said the jobs number would be “hundreds.”

Hattersley also hedged when asked how many jobs would be lost in the process of moving work from Denver.

“It will be a gain in jobs in Wisconsin in the hundreds,” Hattersley said. “There are a lot of high-paying jobs coming to Milwaukee. There maybe a few jobs that move to Chicago, but the net gain is several hundred.”

Molson Coors is moving corporate jobs to Milwaukee as part of a consolidation and restructuring plan first announced Oct. 31. It is dropping the MillerCoors name and rebranding as Molson Coors Beverage Company. Its headquarters will be in Chicago.

Missy Hughes, CEO of the Wisconsin Economic Development Corp., said the state Legislature’s finance committee and WEDC board are creating an enterprise zone for the brewing company.

Hughes said WEDC would make sure the tax credits match with the jobs.

“It’s a competitive process and for the sake of all the others that participate, it’s confidential,” Hughes said. “That information, in plenty of time for transparency with the Wisconsin taxpayers, will be shared.”

Milwaukee Mayor Tom Barrett said he will propose a developer-financed special taxing district of up to $2 million that is contingent on adding new workers and keeping the workers currently working at the brewery. That proposal will need Milwaukee Common Council approval.

“We’re here because we’re really happy because Molson Coors is adding hundreds and hundreds of jobs,” Barrett said. “This was done in real time. They chose Milwaukee. It’s my hope that they pick the city of Milwaukee for every job. I’m optimistic that as this works its way out, this is going to be a big win for our city and our state.”

Hattersley said the incentive package is important, but having two underutilized buildings in Milwaukee is also a factor.

The jobs coming to Milwaukee will be in technology, finance and sales, he said.

Hattersley said the revitalization plan will “regain the successes of the company’s past and create a bright future for Molson Coors.”

“A future where we are innovating and leading our industry forward,” Hattersley said. “I’m pleased to say Milwaukee will play an even larger part in our future.”

MillerCoors Jobs Could Be In Milwaukee By June, But Exact Number Still Unclear was originally published by Wisconsin Public Radio.