Why PFAS Pollution Is So Scary

The chemicals are all over and very toxic. Evers has created two teams to target problem.

They’ve been a part of life for decades, used for everything from waterproofing clothing to making foam for fighting airplane and industrial fires.

But for most of that time, the class of chemicals known as PFAS escaped detection as potentially hazardous to human health. And not until the last five years or so have Wisconsin regulators begun to understand how widespread potential contamination from PFAS chemicals might be.

PFAS stands for perfluoroalkyl and polyfluoroalkyl substances, a class of manufactured chemicals that date back as far as the 1940s. There are anywhere from 3,000 to 5,000 different compounds. And there’s still not much known about them, except for several health hazards attributed to exposure.

“Everybody’s learning here as we go,” Darsi Foss, administrator of the environmental management division at the Wisconsin Department of Natural Resources, told the Wisconsin Examiner.

The extent of the problem has aroused such concern at the DNR and in the administration of Gov. Tony Evers that the state now has two working teams dealing with the PFAS problem.

The DNR has established a technical advisory work group and is in the process of developing administrative rules to set drinking water contamination limits for PFAS chemicals. Two bills  aimed at addressing the problem have also been introduced, one authored by Republicans and one, more stringently worded, authored by Democrats.

Meanwhile, Evers in August issued an executive order establishing a PFAS task force bringing together representatives from government agencies and outside organizations in areas as diverse as agriculture, public health, water regulation, finance, and engineering.

“There are still people in the state of Wisconsin who turn on their taps and don’t have the assurance that pure drinking water will come out of the other end,” DNR Secretary Preston Cole said Thursday at the kick-off meeting of the task force, renamed the PFAS Action Council.

Exposure to PFAS chemicals over time has been linked to reproductive and developmental effects and to problems with the liver, kidneys, and immune system. They may also lead to higher cholesterol levels, lower infant birth weights, defects in the immune system, and thyroid-related disease.

Longer exposure to PFAS has been associated with reproductive and developmental effects in children. Certain groups of PFAS chemicals also have been purported to cause tumors, lead to lower infant birth rates, and cancer.

Man-made chemicals typically accumulate in fatty tissue. PFAS substances don’t, accumulating instead in the muscle tissue. Animals with PFAS in their bodies thus pass  the chemicals along to predators, according to Foss.

For Wisconsin, the first wave of concern about PFAS took place around 10 years ago, when contamination problems surfaced in Minnesota associated with the manufacture of Scotchgard, the waterproofing product produced by the chemical giant 3M based in that state.

Initially, Wisconsin researchers focused on sites that received landfill waste from 3M Scotchgard production, said Foss. Over time, however, more and more of the materials have been detected in places including military bases and industrial sites.

“Some was minor and some was very significant,” she said. “We didn’t think about what other industries could be using these products.”

Further investigation has found that it has been ingested by animals, birds, and people. Along the Wisconsin River, eagles have been recovered with PFAS in their bloodstream. Tests of anglers have found that for those over 55 years of age, PFAS have been found in amounts twice the national average — suggesting it is getting into their bodies through fish consumption. 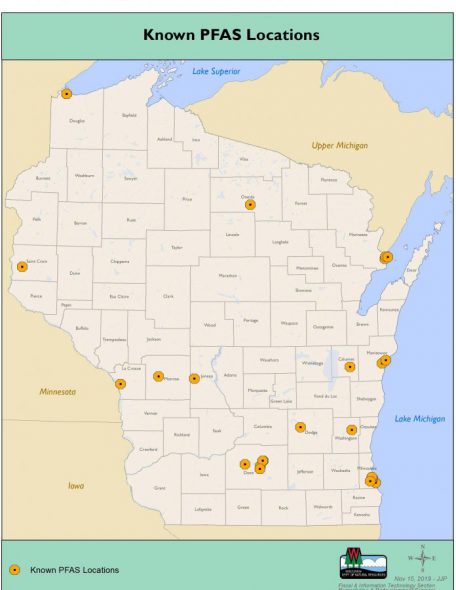 This graphic, supplied by the Wisconsin DNR, shows identified locations of PFAS concentrations around the state as of November 2015. Image courtesy of Wisconsin DNR.

Foss said that federal regulation for PFAS chemicals has lagged, because the substances didn’t fit any of the EPA’s three top areas of concern: Areas of PFAS contamination haven’t been classified as hazardous wastes; the chemicals themselves aren’t petroleum or petrochemical products; and they’re not buried in toxic “Superfund” sites.

Only when evidence surfaced that PFAS was entering some drinking water supplies did the EPA conclude it had jurisdiction over them. Now federal regulators have an action plan for addressing PFAS concerns, but, Foss said of the federal agency, “it’s not as fast as some states want it to be.”

At a recent gathering of environmental regulators from all 50 states that Foss attended, “they all agreed we’re all going to have to solve this ourselves, because the EPA isn’t moving fast enough.”

Within that group, the Great Lakes states including Michigan, Wisconsin, and Minnesota are forging closer relationships to exchange information and ideas, and also to tap into each other’s university researchers, she said, to learn “where are the holes in our knowledge base, and where should we be putting our money?”