See Every Property In The City 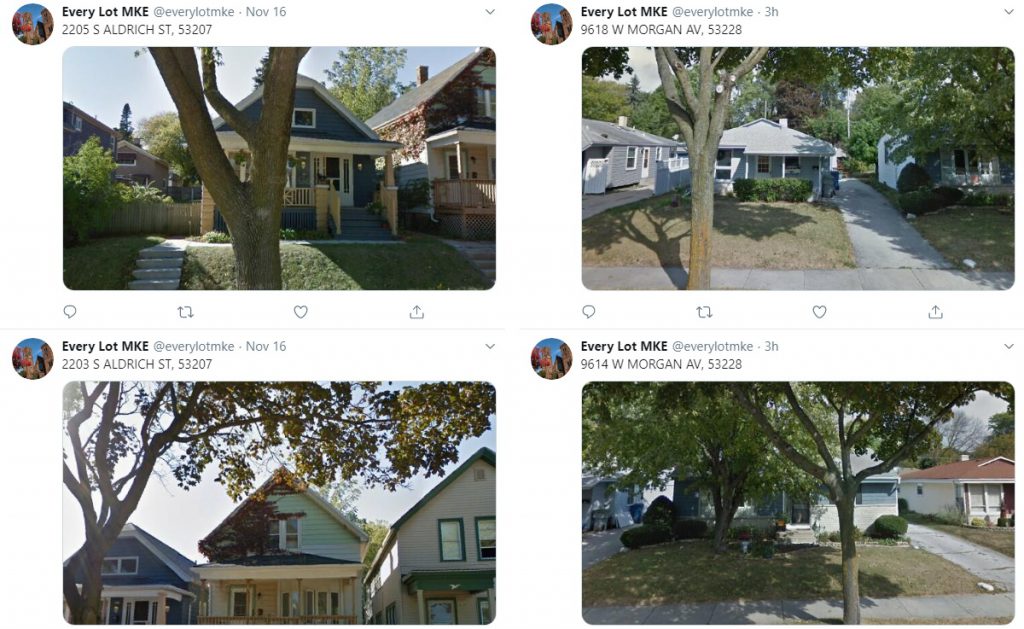 What if you could walk every street in Milwaukee without leaving your house?

Developer Mitchell Henke has unveiled a way to do just that with a new, automated Twitter account.

It’s called Every Lot MKE and it merges imagery from Google’s Street View service with the city’s property records for the approximately 150,000 unique parcels that dot the 96-square-mile city.

“I like seeing pictures from all over the city and how they add up to be streets and neighborhoods,” said Henke via email. “For me, it’s a neat combination of technology, the individual structures and lots that make up the city, and the sort of bureaucratic way the land is divided up.” Henke’s account runs on open source software that powers similar accounts for New York City, Boston, Philadelphia, St. Louis and more.

Every half hour the account shares a new address and an image, taking you down overlooked side streets, past countless duplexes and into business parks. A ZIP code is selected at random every day and the service marches its way alphabetically through the parcels within the ZIP code.

This is happening automatically as a result of Henke merging Google’s Street View with city property records with a new address added every 30 minutes. At that rate, “it’ll take over 8.5 years before it’s run through all of them,” Henke notes. So far just a couple hundred addresses have been done.

The software that makes the process possible was originally written by Neil Freeman of New York City. His other work includes an incredible array of maps, including scale comparisons of subway systems, links between city names and a redesigned electoral college as well as other Twitter bots that post when the New York sewer system is overflowing and the view from buoy cameras in The Big Apple’s waterways.

The imagery isn’t perfect. Sometimes Google fails to return an image, other times a garbage truck was parked in front of the roving Street View vehicle. But most of the time, the service returns an image showing the property on a sunny day.

If you’re interested in the combination of technology and government data, Henke will be presenting Thursday evening at Code for Milwaukee’s meetup to discuss speeding up Milwaukee County Transit System buses by looking at scheduled speeds. The meeting will be held at Layer One Media, 623 W. Vliet St., starting at 6:00 p.m.