The River War in River Hills 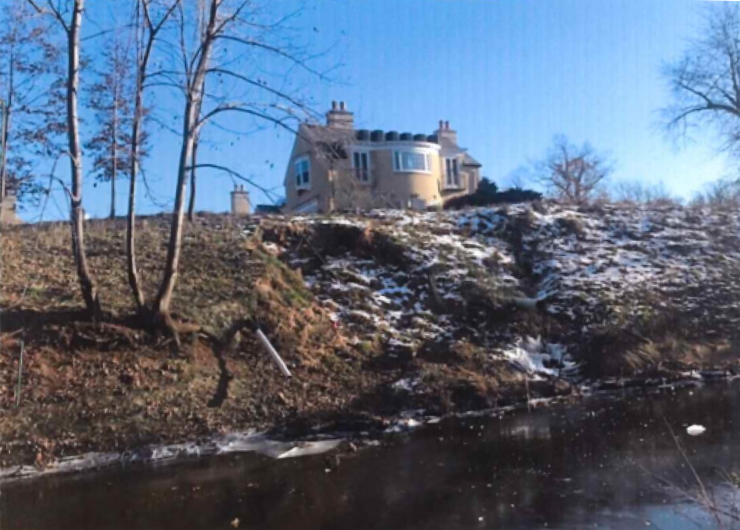 This is a story about environmental damage to a once “picturesque” area along the Milwaukee River allegedly caused by one wealthy (new money) family in violation of local ordinances and Wisconsin Department of Natural Resources standards. The result has been a suit by another wealthy (old money) family in the area against the Village of River Hills and the state DNR, creating a veritable “war”, as one observer notes, roiling the waters of this quiet and well-to-do bedroom suburb.

In November, 2015, contractors removed 375 linear feet of vegetation, amounting to a half-acre, that had obscured the view of the Milwaukee River from the home of Linda Wright, the divorced wife of Charles Wright, a futures trader who served as a chairman of Quaestus & Co. Her residence is located in River Hills, and within a “Primary Environmental Corridor Conservancy District” [PECCD] created over 40 years ago to “protect and preserve the valuable natural resources and property values within the village and specifically within the riparian boundaries of the Milwaukee River and Indian Creek.”

Four years later the Wright riverbank remains unsightly, unstable and largely denuded of vegetation and its exposed underlying clay soil erodes into the river with every rainfall and snow melt.

Cheryl Nenn is a “Riverkeeper” for the non-profit environmental groups, Milwaukee Riverkeeper, who advocates for best practices in the management of the area’s watersheds and riparian environment. She has been grappling with the River Hills situation from nearly its onset, as she tells Urban Milwaukee via email:

Site is “Heart and Soul” of State’s Most Prosperous Community 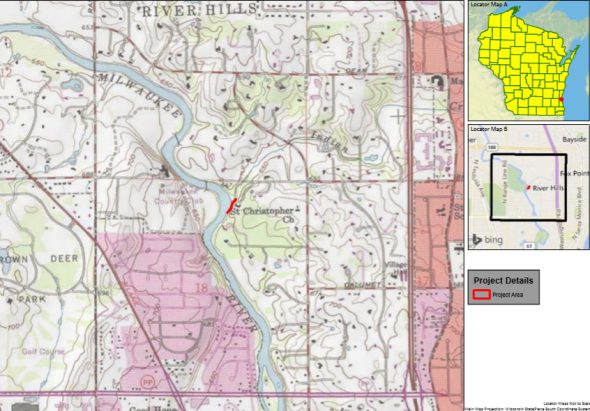 The Wright home was constructed in 1938 as one of the grand mansions surrounding the Milwaukee Country Club, in what architectural historian H. Russell Zimmermann called its “protective buffer of members’ estates.” Assessed at $2.5 million, the 14,376-square-foot home has 14 rooms and is sited on a lot of over six acres. The river is not its only liquid border, as the estate is partly bounded by Indian Creek, which drains into the Milwaukee River at that point. Across Indian Creek from the Wright property is the neighboring $1,100,000 residence of Anne H. and Fred Vogel III. The latter is descendant of Frederick Vogel, who in the 19th century built Pfister & Vogel into the largest leather goods maker in the world. The Vogels bought their 4.89 acre lot in 1966 and built their 6,132-square-foot, 12-room home there in 1968. Whereas the Wright home, in its elevated location, is surrounded by grand expanses of lawn, the Vogel house lies lower and in a more natural setting, with vigorous understory plants and old growth hardwood trees giving it more the aura of a northwoods retreat than its downstream neighbor’s fortress chateau.

Zimmermann, in his 2003 history of the Village of River Hills, included a photograph of the river taken in 1990 from the Vogel property, where Indian Creek meets the Milwaukee River. The caption reads, “… this always picturesque natural corridor is the heart and the soul of the village.”

Engineer Finds Work Done to be “In Violation” of Requirements

Shortly after the bluff was grubbed in 2015 the Village Engineer paid a site visit and noted:

The engineer spoke to the property owner who admitted that the “brush and buckthorn” had been cleared, “but had not given any thought to what would happen next.”

After being cited for her violations subsequent to the intervention of the Nenn’s group, Wright hired a series of engineers and contractors to devise a plan for her property. A stabilization project initiated in 2017, two years after the deforestation, failed by May, 2018, prompting further orders. In April of this year, Wright applied to the DNR for a permit to line the banks of the river with riprap — loose stones and rocks.

Dumping rocks along a shoreline for stabilization is an ancient technique, but it is not suitable in all applications, especially when the river has clay banks, it meanders and has irregular, erratic flow, all conditions which are present here.  Such work is best done as part of a systemic approach of riverbank revitalization, not merely in an isolated location where the remedial work may adversely impact conditions both upstream and downstream.

Concerns were raised in a public hearing about the DNR permit in January, prompting Anne Vogel to enter this statement into the public record:

Based on the comments at the hearing, I cannot understand how the DNR would approve the current proposal. Such proposal is not adequate and use of rip rap could be a hindrance to a proper comprehensive restoration of the riverbank. This point was clearly made by others at the hearing as well.

Her thoughts were echoed by Peter Thornquist of the Committee on the Environment of the Village of River Hills:

This shoreline was denuded of all vegetation three years ago, and now the bare land itself is slumping into the Milwaukee River and Indian Creek. Restoring vegetation years ago would have prevented this unnatural disaster.
I am opposed to approval of this isolated proposal for installation of rip rap unless it is part of a comprehensive plan to restore, up the entire bluff, the native vegetation that once flourished there.

They threw some synthetic logs in at the toe a few years back (or last year?) but they were not dug in or staked appropriately. They put very minimal stabilization fabric in several areas but not covering the whole site. They claim to have planted things, but whatever pesticide they used effectively nuked that site for several years—only recently are weeds coming in. The erosion has continued to get worse. They are now in violation of their waterway permit and last year asked for another permit from DNR to dump rip rap all along the toe, which they were given. Many of the neighbors are very unhappy about this because the owners have had over four years now to do the right thing (some toe stabilization and replanting) and are now putting in an ugly rip rap “band-aid” to stop more erosion from the site. More importantly, the landowner has now fired several consultants, landscape companies and attorneys, and no one has any confidence that they are actually going to follow through at this point and hire competent people to do the job.

Today, “picturesque” is no longer a suitable word to describe the view of the Wright bluff from the Vogel property, as it was in Zimmermann’s history. The barren stumps, the incomplete erosion netting and other attempts to remediate the site remain unattractive and ineffective, as they have been since the bluff was grubbed in 2015. The Vogels anticipated Wright’s remediation to be done in a competent and professional manner, according to the terms of village and state permits, and in compliance with the PECCD.  However, after years of delay and the continuing damage to the sensitive ecological corridor and beyond, the Vogels’ patience wore thin, and they brought two suits to court: one against the Village and another against the Department of Natural Resoures, also naming Linda Wright as a defendant.

Most recently, on October 30th, the Vogels filed an amended summons and complaint in the River Hills suit, demanding:

Declaratory and injunctive relief related to the ongoing destruction and damage caused to the bank of the Milwaukee River and Indian Creek and to those waters themselves lying within a preservation and environmental conservancy corridor within the Village of River Hills.

The Vogels, through their attorney Joseph Cincotta, assert the village:

… has failed to enforce its local law and ordinance that requires Ms. Wright to abate the damage and nuisance.

removing trees and shrubs with machinery and also the application of strong herbicides and chemicals such that the property was completely stripped of vegetation and growth and lay a barren dirt for the next three years. The only purported purpose of this total grubbing of significant areas of environmentally critical riverfront property was to improve the view.

Board Votes to Waive Waiting Period

After years of inaction, Wright now seeks to expedite work on the property. On Wednesday, November 13th, a special meeting of the Village of River Hills Board of Trustees was held regarding the request of  Linda Wright to “reduce the waiting period to commence activity related to the Fill Permit Issued on November 7, 2019. … from Three weeks to 7 days.”

Citing the pending litigation by the Vogels challenging both the village and state permits, Nenn noted, “[it] seems pretty inappropriate that the Wrights rush this through after four years of doing next to nothing.”

At the hearing, which Linda Wright attended, her attorney Timothy Andringa said the original delay was occasioned by Wright’s concern that the DNR might revoke her permit. He said she began work in September, but received a stop work order within one day.

Fred Vogel countered, saying the permit “does not identify who is doing the work, and what will be done. .. . If not done properly there will be consequences to me and to the village and the consequences will be economic. … We are going to be injured.”

Even so, the board voted unanimously to waive the waiting period. After the meeting Fred Vogel asked his attorney to file an appeal of the ruling. The Village of River Hills Appeals Board in response has called a meeting for that purpose to be held Tuesday afternoon, November 19th, at 4 p.m. Vogel’s lawsuits against the village and the DNR remain open, and Urban Milwaukee will follow their progress. The next court event in the River Hills case will be a scheduling conference before Judge William S. Pocan on January 8th, 2020. In its response, the Village of River Hills has asked for a jury trial.

As Nenn, the Riverkeeper, reflects:

While a seeming “war of the Roses”, the real frustration is that lack of enforcement of laws and ordinances, on behalf of the state and River Hills, has led to escalated legal action here that could have been avoided. If the DNR or Village enforced any of the permits/orders in place regarding the Wright property, requiring the landowners to make real, meaningful efforts to stabilize their property over the last four years, then we would not be in this unfortunate situation where the neighbors have had to hire attorneys to protect the river and their quality of life.

Update November 20: On November 19, the River Hills Board of Appeals affirmed the Village Engineer’s decision regarding the issuance of a fill/excavation permit to Linda Wright and denied the appeal by the Vogel’s, meaning Wright has permission to go ahead with her plan to line the banks of the river with rip rap.