Foxconn Innovation Centers Are On Hold

Hundreds of jobs were to be created at centers in four different cities. Little has happened.

By Corri Hess, Wisconsin Public Radio - Oct 23rd, 2019 10:27 am
Get a daily rundown of the top stories on Urban Milwaukee 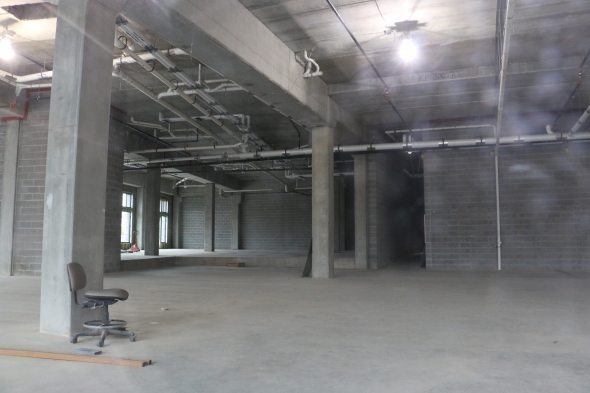 An empty, unfinished, office space is the site for a planned Foxconn innovation center at Haymarket Landing in downtown Eau Claire. In July 2018 Foxconn officials and former Gov. Scott Walker announced the company would create 150 jobs in the city. Photo by Rich Kremer/WPR.

Not long after Foxconn Technology Group announced plans to build a massive manufacturing facility in southeast Wisconsin, the tech giant began making promises to share its model for economic development across the entire state. But 18 months after purchasing its first building in downtown Milwaukee, there is little evidence that what Foxconn calls its innovation centers are moving forward.

In addition to Milwaukee, innovation centers have been announced in Green Bay, Eau Claire, Racine and Madison. Development directors in those cities say Foxconn now appears to be focused on its main manufacturing campus in Mount Pleasant. 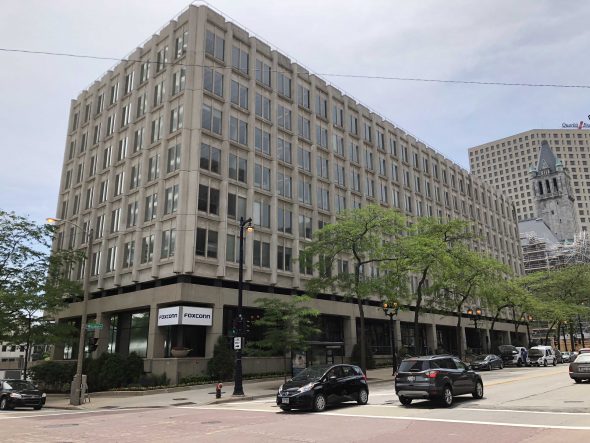 With the exception of Milwaukee, Foxconn has said each of these innovation centers could employ between 100 to 200 people working in high-skilled jobs. In Milwaukee, the company was touting more than 500 jobs.

These jobs are eligible for state tax credits, which are administered by the Wisconsin Economic Development Corp. (WEDC).

“WEDC receives a report from Foxconn on Dec. 31 each year which WEDC uses to determine whether the company qualifies for the jobs credits,” Callender said. “We do not monitor the project more frequently than that.”

When an innovation center was announced in Racine in October 2018, former WEDC Secretary Mark Hogan was in attendance.

That center is currently on hold, said Shannon Powell, a spokesman for Racine Mayor Cory Mason.

“Foxconn is focusing on the (Mount) Pleasant campus,” Powell said. “Should an innovation center in the city get up and running there would certainly be a grand opening event.”

Innovation centers in Green Bay and Eau Claire also appear to be on hold.

In July 2018, Foxconn announced it would purchase two properties in downtown Eau Claire. The company has since moved forward on buying one building, called Haymarket Landing, which is part of a public-private downtown redevelopment project.

Over the summer, Foxconn identified a contractor and did about $2 million worth of work on the building, mainly HVAC, said Aaron White, Eau Claire’s economic development manager.

“That’s been about the extent of it, it’s pretty minimal,” White said. “We did get a visit from four Foxconn staffers and they reinforced their intent to move forward, but they gave no indication of a timeline.”

White said the city was originally told there would be 140 to 150 high-tech and research and development jobs at the innovation center. He said he would love to see that happen, but the city hasn’t given Foxconn any incentives, so if it doesn’t move forward, Eau Claire is not out any money.

“Obviously we would like this, but we’re not aggressively following up with them,” White said.

The story is similar in Green Bay, where Foxconn has been planning an innovation center along the Fox River since June 2018.

Kevin Vonck, Green Bay’s development director, said early on Foxconn was meeting with contractors, but plans have been paused. The company is now planning to start interior construction in 2020, Vonck said.

When the Green Bay project was originally announced, Foxconn said it would open by late 2018. Vonck said he would like for it to move faster, but understands development of any kind has fits and starts.

“This is also a multi-billon dollar corporation with properties throughout the world,” Vonck said. “So, sometimes, even though we think we are on the map with the Packers, we are probably a smaller piece of their portfolio and not a priority.”

Foxconn announced plans this April to purchase a six-story building across from the state Capitol in Madison for an innovation center. A subsidiary of the company purchased the building from BMO Harris in June for $9.5 million, according to records from the Wisconsin Department of Revenue.

In downtown Milwaukee, where Foxconn purchased a seven-story North American headquarters building in February 2018, there have been five building permits pulled this month.

Three are for work on the elevators in the building. The other two appear to be for one of the building’s tenants, Ixonia Bank, which plans to put a branch on the first floor of the building next month, said Sheldon Lubar, the bank’s chairman.

On top of the development itself, the innovation centers are a major component of a new initiative Foxconn announced earlier this month.

“Students enrolled in this unique talent development program will become full-time Foxconn employees with health and other benefits such as ‘time off with pay’ to learn and earn credits on campus,” Alan Yeung, Foxconn’s director of U.S. strategic initiatives, said in a press release.

According to the company, this program, is going to rely on the innovation centers.

Eau Claire’s White said he has always seen the benefit of having an innovation center in Eau Claire because of its proximity to Chippewa Valley Technical College and UW-Eau Claire.

“We think we have the potential for some great partnerships,” White said. “We’ll certainly be happy to work with them as needed.”

But with the future of innovation centers around the state unclear, what that work may look like remains to be seen.

Foxconn Innovation Centers On Hold Across The State was originally published by Wisconsin Public Radio.