By Melanie Conklin, Wisconsin Examiner - Oct 23rd, 2019 11:36 am
Get a daily rundown of the top stories on Urban Milwaukee 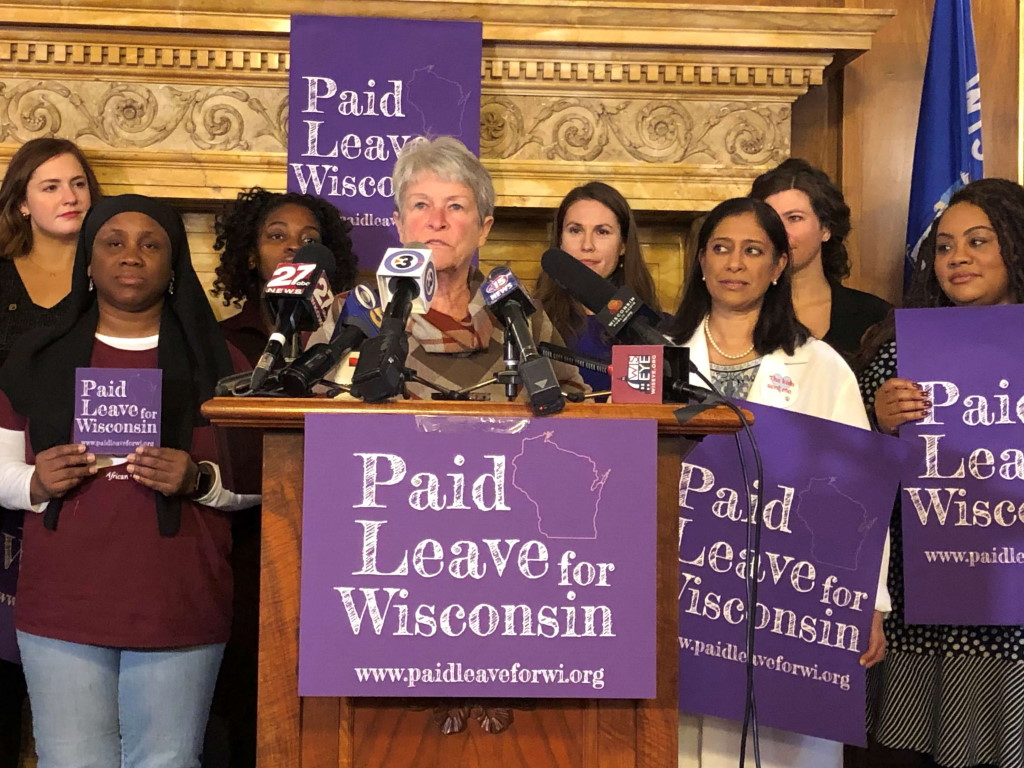 State Sen. Janis Ringhand speaks to why she is introducing the Family and Medical Leave Insurance Act, a new bill that would create a pool of employees in Wisconsin to provide paid leave for employees. Photo by Melanie Conklin/Wisconsin Examiner.

As a pediatrician, Dr. Sarah Webber cites neuroscience to back up her assertion that paid parental and medical leave are “an investment in our future and the health and well-being of our families.”

“Parents and new babies belong together and this is why the American Academy of Pediatrics recommends a minimum of 12 weeks paid leave for the birth or adoption of a child,” says Webber.

Webber frequently cares for babies who have cancer. “Along with the shock of a life threatening illness, parents are helping their children navigate new norms, hospitals, procedures and medications that may make the child feel sick. Children need their parents and leave policies can help to ease the financial burden of those trying times for families.”

On Tuesday, Sen. Janis Ringhand (D-Evansville) and Sondy Pope (D-Cross Plains) introduced the Family Medical Leave Insurance Act (FMLIA), which would create a paid leave system to help employees in a wide variety of situations, not just after the birth or adoption of a child.

All employees across Wisconsin would contribute to a pool run by the state through their paychecks. A qualifying employee could then use it for time off to recover from an extreme illness or a difficult injury where recovery requires more than the available sick days, for example. Ringhand says that other reasons that qualify people for paid family leave under her bill include caring for a parent, a sibling, a spouse, a grandparent or a family member serving overseas in the military.

“The United States is the only industrial country without a national paid leave mandate,” says Ringhand. She recalls needing time off of work when her son broke his leg. “Luckily my husband had a good, union job that could support our family.”

Take a cue from Estonia

The U.S. requires zero weeks paid leave, while Estonia has the longest leave, giving 87 weeks of paid leave for new parents. Another dozen-or-so countries offer about a year of paid leave, according to the Pew Research Center.

Bureau of Labor Statistics data shows that as of March 2018, 17% of all civilian workers had access to paid family leave, and 89 percent had access to unpaid family leave. The federal Family and Medical Leave Act (FMLA), that has been around since 1993, requires 12 weeks of unpaid, job-protected leave to care for newborns or seriously ill family members, and only if employees have worked at least a year for a larger employer (50 or more employees). NCSL estimates these protections cover 60% of the workforce, but many eligible employees cannot afford to take unpaid time off of work.

The proposed Wisconsin bill, modeled after successful efforts in other states, is an insurance trust fund paid for entirely by employees, who would contribute from $1.33 a week for the lowest wage earners, up to $19.59 a week for those making $132,000 or more. It would be administered by the state Department of Workforce Development, which would collect the employee contributions as it now collects unemployment funds.

Ringhand began circulating the bill Tuesday, requesting cosponsors from  both parties, but she said no Republicans have signed on as supporters when she’s introduced similar bills in the past. She hopes this time will be different.

National polling shows that the concept is popular: 85% of workers support paid family and medical leave, although many believe it should be the employer that pays for it, as opposed to the model being introduced here where workers pay into an insurance fund.

So far no chambers of commerce or industry groups have signed on, says Ringhand. However, nationally there are conservative groups, such as the American Action Forum, that are pushing for paid family leave for low-income workers, breaking from most Republicans. And, according to the National Review, there is a fledgling debate on whether paid family leave should be embraced as a conservative idea.

Andy Roth, of the staunchly conservative Club for Growth, panned a federal paid leave plan “social engineering through the tax code,” in an article in The Atlantic. But he said it should be left up to the states. “If paid family leave is worth having, then the states that offer it should experience an influx of new people who are attracted to ‘employee-friendly’ programs. This kind of ‘voting with your feet’ is healthy, and it will foster competition among the states that will likely lead to the best policy possible.”

Sara Finger, the executive director of the Wisconsin Alliance for Women’s Health, is a strong proponent of the bill and encourages Republicans to support it. She notes that Sen. Marco Rubio and Ivanka Trump have been warm to the idea.

“This is something that has wide public support,” says Finger. “At this point, we encourage any state legislators who are looking to invest in our communities, the health of our communities, our families and our workforce to sign on to support the Wisconsin Family Medical Leave Insurance Act.” 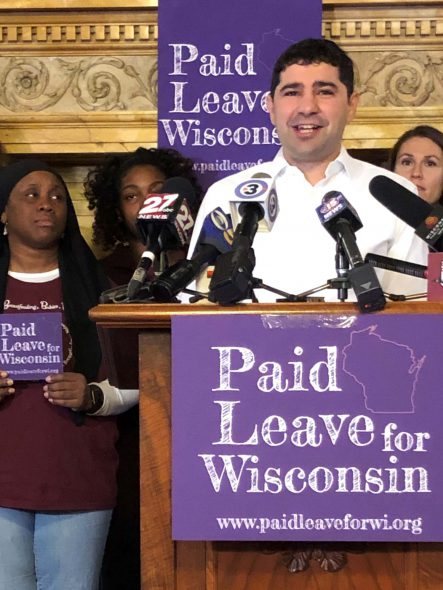 “The perk of having access to a game room only goes so far,” says Scott Resnick, of Hardin Design & Development, who works with startups and other tech companies as the entrepreneur in residence at StartingBlock in Madison and across the country.  He sees paid leave as a necessity if Wisconsin hopes to attract and keep talent.

State Treasurer Sarah Godlewski says that as the chief financial officer for the state, she’s looking into the results of programs in other states and has discovered positive reports from businesses of better recruitment, retention and productivity. In California, 90% of businesses reported the policy had either a positive impact or no negative impact, according to Godlewski. She adds that 9% reported it actually saved them money by reducing employee turnover.

Godlewski also examined Department of Labor statistics and found a recent study showed that in order to take a leave under current FMLA policies, 30% of workers have to borrow money, 35% have to dip into savings or retirement accounts, 35% have to stop paying some bills and 15% have to go on some sort of public assistance.

“When you look at the results of these programs in New Jersey, Rhode Island, California — it’s not only good for their citizens, it’s good for business,” says Godlewski. “Wisconsinites deserve peace of mind and no one should have to choose between earning a paycheck or taking care of the well-being of their family. But that’s the status quo today.”

The proposed FMLIA bill would also allow municipalities, counties and other local governments to put into place their own leave benefits that could be more generous than state law. 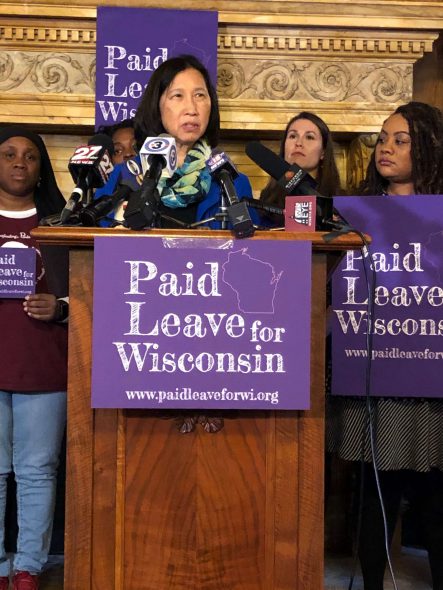 Irene Strohbeen is a legislative co-chair for the Mid-Day Women’s Alliance, a businesswomen’s organization in Appleton, where she also works as the entrepreneur in residence for Lawrence University.  Her take on the bill comes from being in management for 20 years at Kimberly Clark in Neenah. Strohbeen estimates costs to a company of recruiting and training can be twice as much as an annual salary.

“I knew of women who returned to work after six weeks of paid, short-term disability leave, only to resign due to lack of supportive parental policy,” she says. “A reduction in turnover from this policy will have a direct impact on the bottom line to business.”

Tia Murray, CEO of Harambee Village Doulas, sees an additional benefit to paid leave that addresses one of the biggest disparities in Wisconsin.

“Currently we are in the middle of a public health crisis — we have one of the greatest disparities in black infant mortality, as well as black maternal mortality,” says Murray, holding her own infant as she talks. “We also know that things such as breastfeeding success can mitigate the risk of dying before your first birthday, which is what is happening in our black community here. Our babies aren’t seeing their first year of life.”

Murray says a policy like this “is one easy step to begin to address some of those disparities we’re seeing in maternal/child health outcomes. So we want our whole community to pull together to produce better outcomes for all workers.”

Another supporter of the proposed legislation that has been lobbying in the Capitol for paid leave for some time is the group 9 to 5 Wisconsin, focused on working women. Member Becca Donaldson is an attorney who had to drop to part-time work to help her mother. “Last year, a doctor confirmed what we suspected,” says Donaldson. “My mom has early-onset Alzheimer’s. It’s a chronic disease that requires more and more help over time. And this is only headed in one direction.”

The part-time paycheck meant stretching herself financially, but she labels herself as one of the lucky ones. “I barely pieced together solutions as an attorney at a job with vacation and sick days. I do not know how someone could do this without paid leave from their employer or without a salary that allows them to take unpaid leave, which is a lot of jobs in this country.”