The End of Autopia? 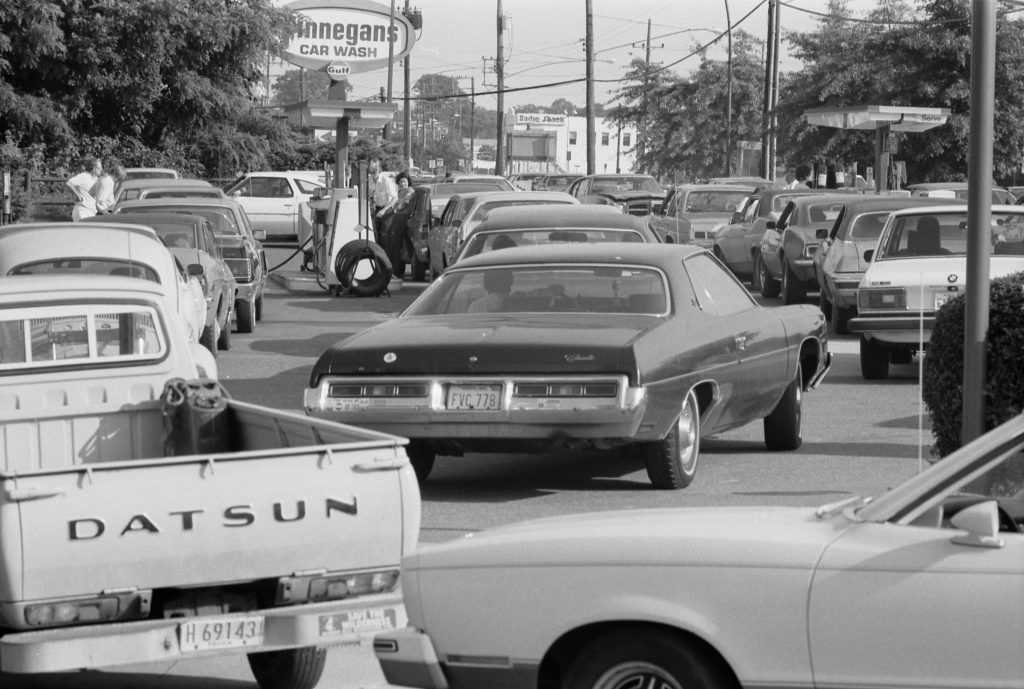 Automobiles lining up for fuel at a service station in the U.S. state of Maryland in the United States, in June 1979 during the second oil crisis. Photo is in the Public Domain.

Every Bus in the US Needs a Lane: Earlier this month, New York City transformed 14th Street into a bus-only crosstown thoroughfare. In just two weeks, the M14 now runs twice as fast as other crosstown routes, the street is calmer and safer, and no adverse affects on other nearby streets have been found. This busway, and other experiments elsewhere in the US, prove that dedicate bus lanes are a much-needed solution to slow buses. One bus lane in Los Angeles in moving 70 buses per hour. In Denver, goes further by developing a double bus lane. Especially as cities try to curb emissions, these relatively low-cost solutions should be more in the spotlight. (Alissa Walker | Curbed)

The Future of the Gas Station: In the United States alone today, there are about 130,000 gas stations service 268 million cars. This soon may change though as electric alternatives to the combustion engines rise and dense, transit-oriented cities grow. In Europe, there were some 116,000 gas stations operating in Europe, but this number had fallen to 77,000 by the end of 2017. As our transport demands shift, the gas station typology, including their size, aesthetics, and number, is in flux. (Niall Patrick Walsh | ArchDaily)

Millennials Come to America’s Small Towns: For the fourth consecutive year, census figures show that millennials and younger Gen X-ers are leaving big cities, with an average of about 30,000 residents between 25 and 39 leaving big cities annually. According to an Upwork survey, telecommuting is one of the main factors that many are finding smaller cities that cater to their lifestyles. Another reason for the migration is the rising cost of living in cities, especially for families. (Liz Farmer | Realtor.com)

The Twlight of Autopia: The 1970s saw an energy crisis that seem to have destabilized America’s car culture and oil-dependent politics. Americans saw its first-ever peacetime gas shortage in 1973 as demand for fuel outstripped supply; gas station queues become crowded. Oil companies like Exxon and Shell stoked consumer fears with limited business hours and ten-gallon limits. This irked motorists, who began to verbally and even physically abuse service station attendance and perceived line cutters. Experts at the time found the shortage as an overdue warning for a car-dependent nation, but the US did not listen. (Gabrielle Esperdy | Places Journal)

But the room was full, and not of the usual engineers and lobbyists who come to watch and see where the money is going so they can plan what’s next. A lot of them were people of color. There was a lot of energy.

-Transit Activist Oni Blair in the Texas Tribune on pushback on freeway expansion in the Houston region.

This week on the podcast Eric Jaffe of Sidewalk Labs talks about the company’s Quayside plans in Toronto.