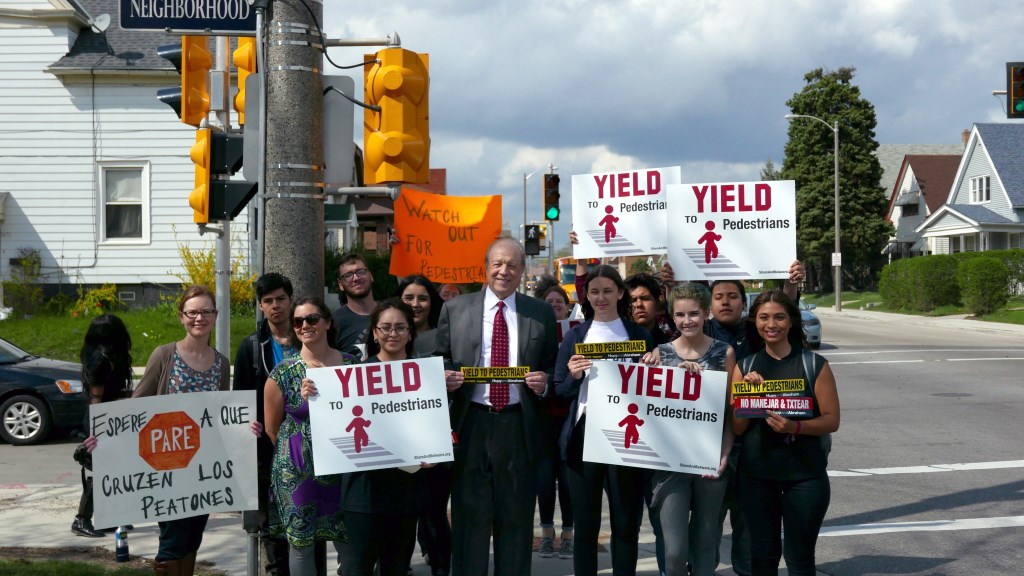 Pedestrian Deaths on the Rise: For drivers, roads in the US are safer than ever, with non-pedestrian road fatalities decreasing 7% since 2008. Since then, however, pedestrian fatalities have risen 41%. Similar figures are appearing worldwide, where regardless of national prosperity, almost every country in the world is seeing deadlier conditions for pedestrians. Globally, almost 700 pedestrians die each day; about four times that number are seriously injured. (Peter C Baker | The Guardian)

Hidden History of US Anti-Car Protests: The common narrative of the United States as the ultimate car-loving nation has erased critical anti-automobile demonstrations in the mid-twentieth century, which were mostly spearheaded by women. Many of these demonstrations were actually in small cities, suburbs, and towns, typically triggered by the death or injury of a child. But as families grew smaller and suburban sprawl rapidly expanded, such demonstrations declined in frequency and scale by the 1970s. (Peter Norton | CityLab)

Cities Need Taller, Wooden Buildings: Cross-laminated timber (CLT), first introduced in the 1990s, has enabled architects and engineers to design tall, fire-safe and beautiful wooden buildings. Now, private industry is ready to ramp its production of CLT; a plant recently opened in Washington State, and last week, the first ever New England plant was announced in Maine. The energy consumed to create building materials accounts for about 11% of global carbon emissions, and one study estimates that building a five-story office complex with wood would have a third of the climate change impact of a traditional steel and concrete building. (Frank Lowenstein, Brian Donahue, David Foster | New York Times)

The Future of the Paving Slab: Dutch design collective Envisions has developed a paving strategy involving cutting, washing, and stamping stones. The city of Eindhoven previously imposed a rule that all paving should be red, and Envisions creatively responded to this constraint with a wide range of designs. Eindhoven’s city center currently uses about 100 different stones for paving so to create unique designs that still feel uniform, Envisions water-cut and stamped many designs of different structures, textures, and colors. (Amy Frearson | Dezeen)

Idealism as the Drive of US Planning: When New Urbanism first sprouted in the 1980s, it was predicated on the belief that “greater sociability could be engineered through a particular set of physical arrangements and design aesthetics.” In his book City on a Hill, Alex Krieger explores this notion, positing that such utopian visions shaped American cities out of a need to experiment with organizing society according to economic, political, or social visions. As new urban woes arise, Krieger argues that new utopias now need to be imagined to galvanize American city planning once more. (Nicolas Valencia | ArchDaily)

The thing that gets under my skin, personally,” he said, “is that this response from FHWA is not really grounded in any data. There are hundreds around the country, if not thousands around the world, and I don’t know of any study that has been able to show that they are actually causing any problems.

–Mike Lydon of the Streetplans Collaborative in The New York Times discussing FHWA’s distaste of colored and specially designed crosswalks.

On this week’s podcast we’re joined by Lily Bernheimer of Space Works Consulting who talks about her work as an environmental psychologist.