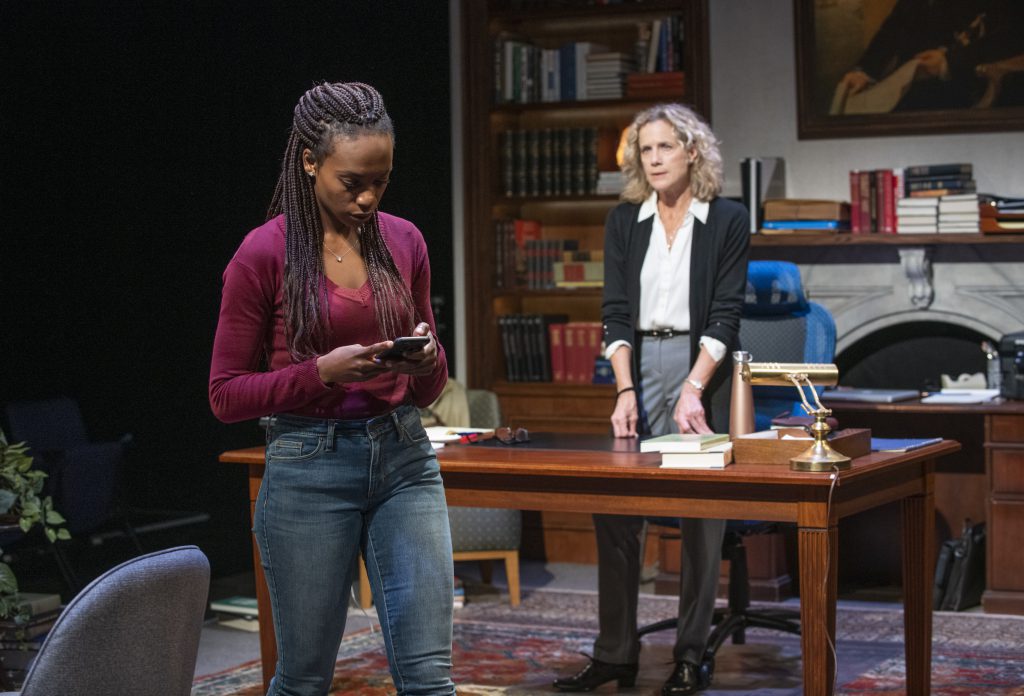 About the last time we’ll find anything appropriate rather than sardonic in the play’s title, “The Niceties,” is when we the audience enter and take in Courtney O’Neill’s nice and fancy set for the Milwaukee Rep’s two-sided seating – a sweeping rectangle of portraits, rugs and clusters of books, an overly large luxurious academia office out of Ivy League heaven.

It’s another example how the technical staff relishes stretching its faculties in the Stiemke Studio space, this one through Nov. 3.

The lavish office is occupied as if earned by one white liberal professor, an authority on history who, as we learn from her lips in snippets, is honored by her peers and her nation for feminist pioneering and authenticity. She is “advising” – or so she thinks – a bright intensely angry black student activist, who studies the professor as if embalming a specimen. The conversation will turn dark and ugly despite a great deal of what could be understanding as they discuss the American Revolution.

Playwright Eleanor Burgess, who grew up during such academia conflicts, has put intellectual depth and vitriol in the impaling of white privilege, in skewering the now fractured meaning of feminism, in exposing the scholarly rationales for one-sided textbooks on American history, in detailing the continuing weight of the white boot bearing down on the minorities – and of black students like Zoe who can’t see anything but that dirty white boot.

Despite “Niceties” – that word again – about how far America has come from its darkest centuries, despite being set in Obama times, despite our hopes to merely be amused by what horrors of antique America have erupted since, despite strong arguments about how much better it is for a black in college today than a slave in the fields, the play offers scant comfort of the future for either side. In fact, it is hard to see any contrition or optimism within the emerging ferocity.

As often happens in theater – and as suggested by the set and the sound elements — we root for the underdog in the power game and the appeal of a “take no prisoners” idealism. Until we are sobered by where our sympathy leads. Particularly when both sides engage in the personal cruel attacks that our era and the Internet thrive on.

You can punch doubts into many of the hard-earned attitudes on both sides, but the audience is being treated as intelligent enough to handle nuance. How rare and how welcome. You can see some echoes of David Mamet’s university gender destruction in “Oleanna” but I think this one digs and stings deeper on an argumentative scale and has little to do with sex.

Even some important plot twists can’t disguise that black student Zoe has the playwright’s stronger edge in the arguments than middle aged professor Janine, though Janine is the better drawn character. (I told you this was challenging theater.)

Director Annika Boras stays out of the actors’ way, which is not as easy as that sounds. Her two actors, Kate Levy as Janine and Kimber Elayne Sprawl as Zoe, keep every argumentative ball in the air, sometimes too ardently though always fascinatingly. Both are excellent interpreters of the complicated debate pieces and both had more difficulty changing the mode of attack when the script needs such a change. The actress Sprawl in believable intensity supplies a rage and sarcasm that never goes away while Levy with swirling punctuating hands and righteousness keeps her professor from becoming too smug – and yet so self-revealing.

The Rep is conscious of diversifying its audience. But there is an irony for all the white privilege watching in the house. Playwright Burgess and director Boras, in race an embodiment of white privilege, have slightly stacked the deck so that Zoe seems too victorious and Janine falls into dismay and verbal traps that test our belief in her survival instincts.

The production is well done – the ending music will chill you – so much so that some structural weakness becomes almost invisible because we are consumed by the ride. The Rep has also scheduled panels, mainly in October, led by community organizations, an added final session for patrons who want to discuss the issues further – and many in our typical unbounded optimism will. 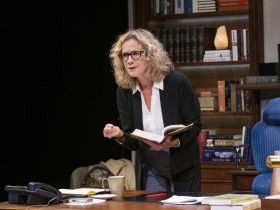 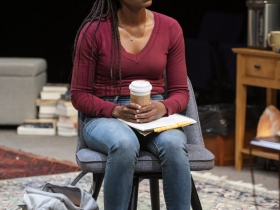 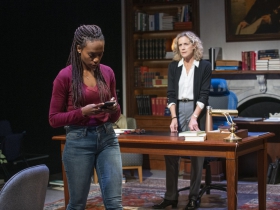 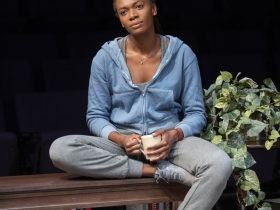 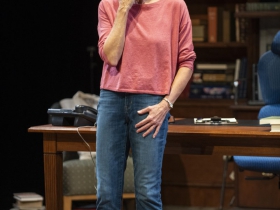 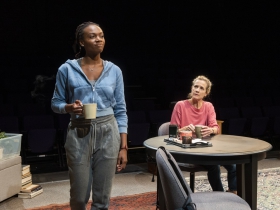