Frankly Music Brings on Many Guests 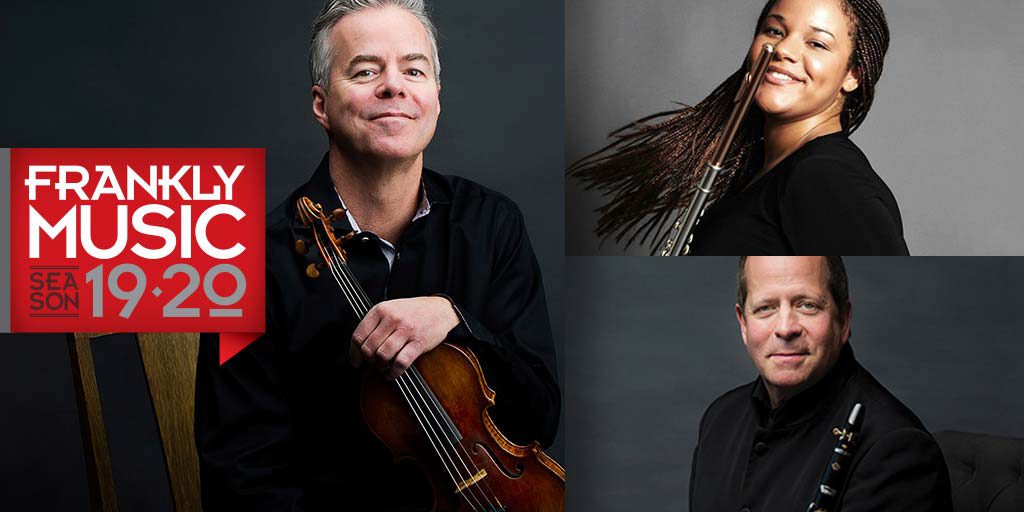 The Frankly Music chamber series opens a 2019-20 season at St. Paul’s Episcopal Church next Monday evening. The concert features flutist Sonora Slocum, clarinetist Todd Levy as featured guests along with other colleagues from the Milwaukee Symphony Orchestra. Artistic director Frank Almond explains, “I wanted to showcase the musicians to tie it into the orchestra’s transition.”

“We will introduce music we have not done before, including spectacular brass players,” Almond continues. Key members of the symphony’s brass section open the concert with bright works for brass. A transcription of a renaissance choral work by Giovanni Palestrina, Adoramus te Christe retains the lush harmonies of a four-voice chorus. (The link is to a choral version) Two antiphonal works by Giovanni Gabrielli engage the players in conversation. Written for the choir lofts above the congregation in the San Marco Cathedral in Venice, Canzona per Sonare No. 1, La Spiritata and Canzona Per Sonare No. 3 fill the air with stereo fanfares.

MSO strings contribute a sextet by Pyotr Ilyich Tchaikovsky, his Souvenir de Florence in D Minor, Op. 70 (1890). Tchaikovsky’s ‘souvenir’ – an Italian melody featured in the second movement adagio cantabile provides the title. That melody floats above the hint of guitar accompaniment in the pizzicato strings.

But Slavic songs and folk dances are sources for the rest of the piece. A joyful theme in the final movement is based upon a popular Russian folk song “In the meadow stood a little birch tree.” The lyrics are meaningful to the music: “Silver leaves all dance when the wind blows. … Nobody shall break down the birch tree … (But) I will go into the forest and fell a white birch tree … and make three little pipes … and make a balalaika to make my old grandfather pleasure.”

As with many Tchaikovsky orchestral settings, Souvenir is full of wonderful melodies. The chamber setting, Almond points out, “allows a concise structure with a role for everybody. Each individual in the piece gets their time in the sun.”

Slocum will be featured in W.A. Mozart‘s Flute Quartet in D, K. 285. An audience favorite at symphony concerts, Slocum infrequently appears in Milwaukee chamber music concerts. Almond observes, “Sonara has a beautiful sound. She is one of the great flute players anywhere.” In a prior Urban Milwaukee review, William Barnewitz observed, “Slocum takes in vast quantities of air and spins it into gold. Hers is a dynamic range that whispers clearly and coherently and grows without tearing at the edges. Slocum has a HUGE sound…and a wizard’s bag resplendent with technical prowess and musical freshness.”

The flute quartet is primarily in ‘concertante’ style. Kai Christiansen observes that “transparent textures and vivid contrasts of colour and articulation combined with the work’s lightness and brevity place it stylistically in the realm of the Rococo, a brief ‘galante’ flourish representing a hybrid of the emerging early classical period with traces of the lingering Baroque.” In his biography of the composer, Alfred Einstein wrote that the adagio movement suffused with “the sweetest melancholy; [is] perhaps the most beautiful accompanied flute solo that has ever been written.”

In a triumph of orchestration, a well-known work by Johann Strauss, the “Emperor Waltz,” was adapted by Arnold Schoenberg for chamber players. Clarinetist Todd Levy joins flutist Slocum to carry the themes. Pianist Elana Abend and a quartet of strings complete the mix.

Almond observes that “everyone that thinks Schoenberg was hell-bent on destroying tonality” share a misleading stereotype of him. “He was brilliant as an instrumentalist arranger and colorist. He was a post-romantic composer early in his career. [His adaptation] captures all the nuance and charm and transparency and fun of this waltz. But the original Strauss is all there.”

Strauss incorporates not one but five waltzes in the work; offering a theatrical view of the Viennese royal court.

Monday’s September 23rd concert will be held at 7:00 p.m. at St. Paul’s Episcopal Church, 914 E. Knapp St. in downtown Milwaukee. General seating tickets may be purchased on-line for $35 ($10 student). Tickets for all season concerts are now purchased through the Wisconsin Lutheran College Schwann Hall box office (414 443-8802), the home of the 2020 concerts in the series.

Come early for the best seats and stay late for the creatively catered reception after the concert.