The Fragile Artistry of Daniel Johnston

Mental illness kept him in a private hell. Yet he created some beautiful songs. 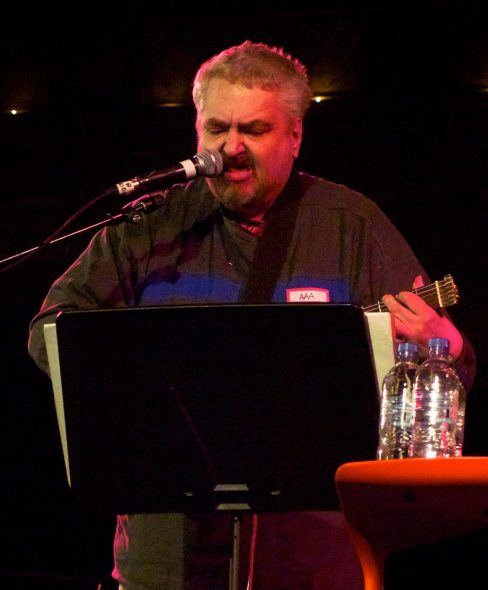 I like outsider art — a lot. What’s not to like? What I see when I look at something by Howard Finster or Simon Sparrow is the urgent need to express something with no business plan in sight. It winds up in the world of commerce in a few short transactions, from something sold by the side of the road to paintings that can rise in time to luxury items, selling for thousands of dollars. The artist should share in these profits, but there is no law that says they must. In a lot of cases they don’t.

This phenomenon is rarer in the world of music, but from time to time, someone out of the mainstream makes music you could could hand the outsider tag on and gains a devoted following. Daniel Johnston, who died last week at age 58, was one of them. His life story was captured well in the documentary “The Devil And Daniel Johnston.” The title says it all — mental illness kept this man in a private hell that was neither cute nor as much fun as his music and art.

I got to see it up close.

About 10 years ago, my band at the time, The Subcontinentals, was asked to back him on about ten songs at Turner Hall. His tunes were simple and catchy — we were happy to oblige. The audience crowded the stage and gazed at him with loving eyes, soaking up every word. I’d say he did a bang up job, given the circumstances, but it was more like he got through it. Seeing him up close I had the strong feeling he shouldn’t have been there.

I’ve seen people on anti-psychotic medication. I used to work at a half-way house where many residents were on Thorazine. I also have a student and friend who was convinced she was the devil. The kind of pain experienced is hard to imagine. She’s better now, but has to deal with severe side effects from the meds that keep her in a better place. Daniel Johnston was beyond a doubt medicated that evening. After his set he stopped on the short stairway that led to his dressing room to stare at the wall for a little while. There was also an impenetrable wall between him and the world around him.

I was told the tour he was on was arranged to help with his expensive mental and physical needs. Aside from the financial gain, how did the tour benefit him? Did he enjoy playing? I didn’t know him, but if he did, it was not evident in any way. If he had been in my care, I’d like to think I wouldn’t have dragged him all over the country in the sorry state he was in.

Was the audience complicit in his suffering? At the time I was upset by their attitude towards him. I don’t think they were laughing at him, but if they thought they were laughing with him they must not have caught the obvious signals that this man didn’t seem capable of laughter. Did they genuinely like his music or was there a touch of smug hipness on display? I thought I saw some of the latter, but there’s no doubt there was something special about his music and the audience had a deep affection for his songs.

If they had rolled a gurney out onto the stage and forced a seriously ill person to perform, it would have been considered cruel. With mental illness, the suffering is less obvious and the show must go on. The utopia that visionary artists create doesn’t mean they get to live there — it’s more likely an expression of how far they are from it. Daniel Johnston is no longer suffering. He leaves the world some sweet songs, like this one, and piles of lovely drawings. He also leaves behind more questions than answers about what we do with the beautiful byproduct of a difficult life.