The Story of Sherman Perk

From gas station to coffee house to community gathering place.

By Andrea Waxman, Milwaukee Neighborhood News Service - Sep 6th, 2019 10:48 am
Get a daily rundown of the top stories on Urban Milwaukee 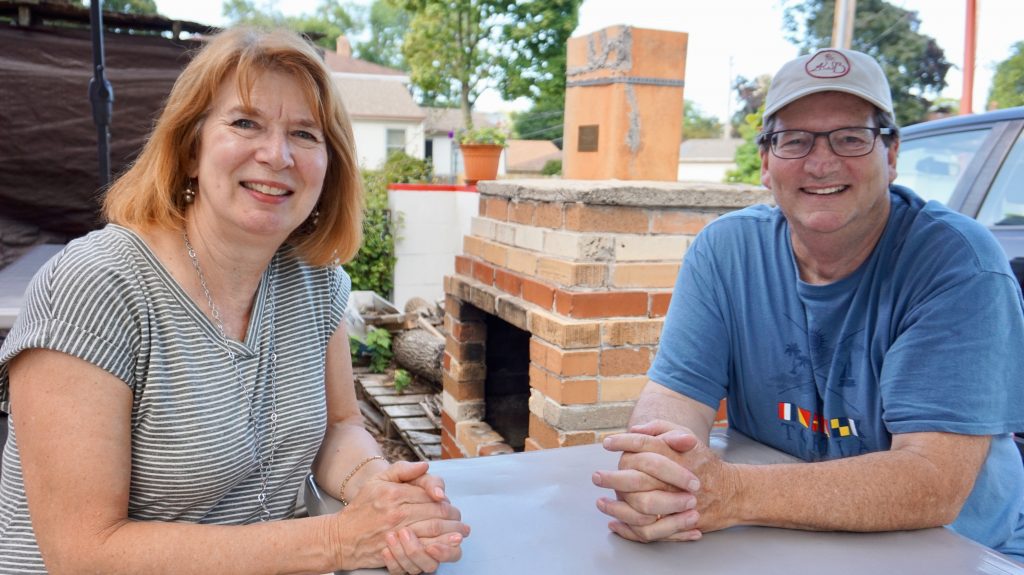 Bob and Pat Olin recently celebrated the 18th anniversary of the launch of their business, the Sherman Perk coffee shop. Neighbors and other customers contributed bricks used to construct the wood-burning fireplace on the shop’s patio. Photo by Andrea Waxman/NNS.

When their kids were growing up in Sherman Park and started going to coffeehouses, they would all hop in cars and leave the neighborhood because there wasn’t a shop in their neighborhood.

Their parents, Robert and Patrice Olin, decided that establishing the Sherman Perk coffeehouse would be their way of “giving back to the neighborhood that raised their kids,” Bob Olin said.

“Unfortunately, by the time we opened, we only had one child left at home,” said Bob Olin, “but she worked here, and she and her friends would come and hang out, which was fun.”

Bob and Pat Olin grew up in Whitefish Bay and Bay View, respectively, and met at the University of Wisconsin-Eau Claire, where he majored in business and she earned a nursing degree.

After college, they returned to Milwaukee and moved to the Sherman Park neighborhood. They chose it, they said, because the cost of housing was affordable. They’ve owned three homes and raised four children in the neighborhood — moving as their family grew and later as their kids left home. Now they live on North 49th Street, a stone’s throw from the coffee shop.

Since opening in August 2001, the coffee shop has emerged as a community gathering spot in one of the most racially, religiously and socioeconomically diverse neighborhoods in Milwaukee. It is located at 4924 W Roosevelt Dr., near the intersection of 50th St. and Keefe Ave.

“Our customers have really shaped our business” — the menu, hours and the activities, Bob Olin said.

After Labor Day, the shop features live music on Friday evenings throughout the winter. During the summer, bag toss is popular. Over the years, the Olins have hosted karaoke and poetry readings and provided an audience for new musical groups, among other activities. 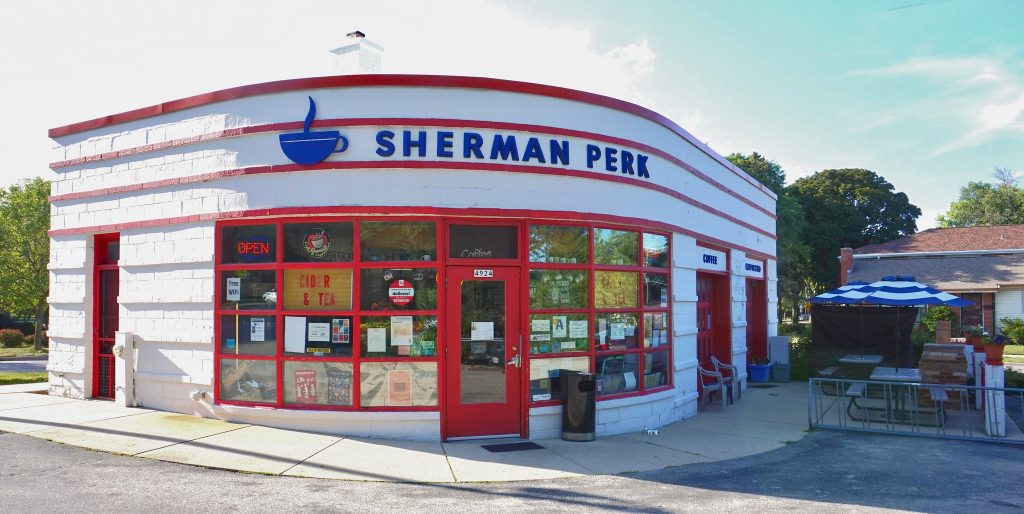 Sherman Perk was originally the Copeland Service Station, opened in 1939. The Olins, who redeveloped it as a coffee shop that opened in 2001, did an extensive environmental cleanup of the site. Photo by Andrea Waxman/NNS.

‘You see all types’

Greg Kirkish, friend, neighbor and regular customer, said he walks or bikes to Sherman Perk about four mornings a week. In addition to good coffee and a bite to eat, he enjoys reading the newspaper and chatting with other customers, he said. He’s become acquainted with many people who live in the neighborhood that way.

“You see all types of people and everybody seems to get along,” Kirkish said.

Noting that the Olins turned a blighted eyesore into a community asset, with “a lot of sweat equity,” Kirkish added, “If somebody comes in there, and they forget their money, or they don’t have any money with them, Bob will give them a coffee.”

“I don’t think you’re going to find that at Starbucks or other places,” he said.

When Sherman Perk opened, it offered four flavors to go into drinks. Now it has 36, Bob Olin said.

From gas station to coffee shop

In early 2000, the company Bob worked for abruptly closed the computer manufacturing plant that he managed. Bob was thinking about his next career move and Pat was working nearby at St. Joseph Hospital when they learned that a gas station on North 50th Street was going to be razed.

A neighborhood association considered buying the property and turning it into a coffee shop, but legal and environmental issues created too many barriers.

The building had been in tax foreclosure and was contaminated with automotive and aviation fuel. The need to pay tens of thousands of dollars in back taxes and fund an environmental cleanup made it almost impossible to find a buyer, Olin said.

Then Cliff Leppke, an automotive and architecture enthusiast, came to the rescue by passionately advocating for and eventually winning city historical designation.

“It took 14 months for us to legally acquire the property using a new state statute that one of the assistant city attorneys in Milwaukee had authored that specifically addressed tax delinquent, contaminated properties,” said Bob Olin. Pat Olin added, “It paved the way, I think, for many other people to do similar (projects) … with the potential to really create something wonderful for their communities.”

One thought on “The Story of Sherman Perk”