Cutbacks will “impact the most vulnerable folks”, community leaders say.

By Caroline White, Milwaukee Neighborhood News Service - Aug 29th, 2019 10:53 am
Get a daily rundown of the top stories on Urban Milwaukee 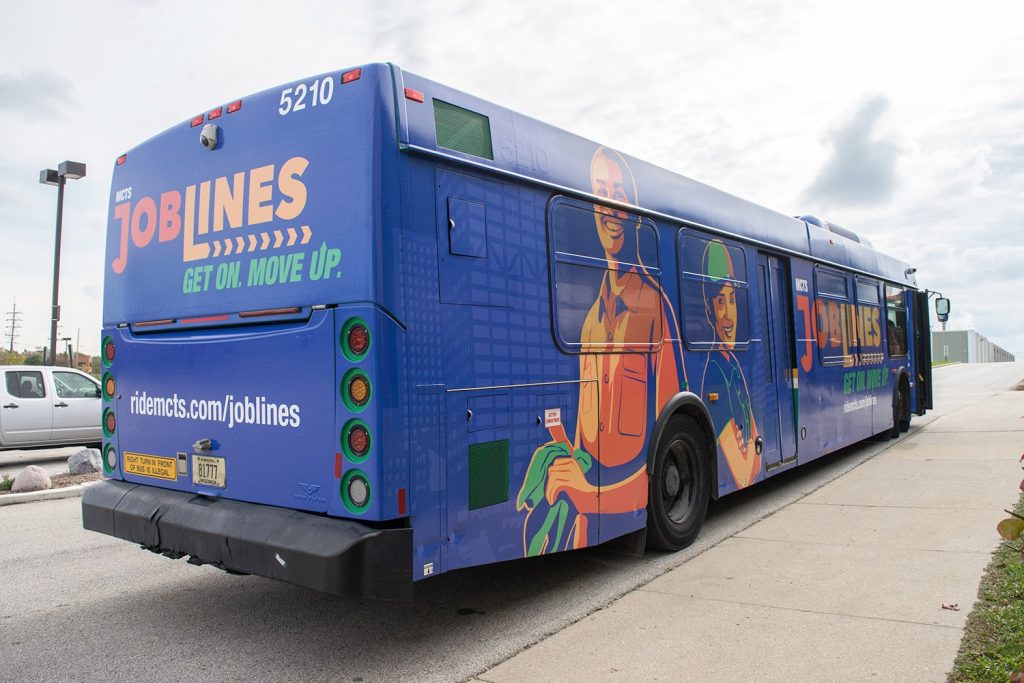 The closing of the JobsLine, which included stops in Menomonee Falls and Germantown, and the prospect of more cuts has rattled some members of the community. Photo from MCTS.

The community organizer of Metcalfe Park Community Bridges knows that anything that affects Milwaukeeans transportation to work is always a cause for concern.

She says Uber or Lyft are often too expensive for those working on an hourly wage. Carpooling can be time-consuming for coworkers who don’t live close to one another. And walking miles from a bus stop is not an efficient option.

Anxiety in the community continues to rise ever since the Milwaukee County Transit System recently announced that 16 routes are in danger of being cut; two routes are potentially being shortened; and some seasonal services will be eliminated because of proposed funding cuts in the 2020 Milwaukee County transportation budget.

The routes facing cuts include six Freeway Flyer lines, four UBUS routes, five shuttles, Route 52 and seasonal services such as the Brewers Line. Route 55 and Route 80 could be shortened.

MCTS leaders say 97 percent of ridership will not be affected by cuts.

In July, MCTS announced that Route 57 would end its service to Waukesha County on Aug. 24 because its temporary funding has run out. The branch of the route, known as JobLines, included stops in Menomonee Falls and Germantown. Now, the bus line will not extend past Milwaukee County.

MCTS leaders say the majority of Route 57 patrons do not ride to the stops in Germantown or Menomonee Falls and won’t be affected by its absence.

The extension has only existed since the beginning of this year. Before 2019, rides outside of Milwaukee County were provided by Route 6 and Route 61.

A $13.5 million settlement funded the JobsLines routes from 2014 to 2018. It stemmed from a lawsuit filed by the Milwaukee Inner-City Congregations Allied for Hope , or MICAH, and Black Health Coalition of Wisconsin, or BHCW, against the State of Wisconsin and the U.S. Department of Transportation over funding for the I-94 Zoo Interchange reconstruction in 2012.

The Milwaukee Country Board of Supervisors was able to allocate funds in the 2019 county budget to allow Route 57 to provide the service to Waukesha for a few months. Additional funding was sought from Waukesha County and the state to maintain the extension, but those efforts failed.

“When are we going to stop saying what we don’t have the money for?” Lisa Jones, the lead organizer of MICAH, asked. “We say we want people to have jobs and we want them to be taxpayers, then we have to find ways of being able to create that. Instead, we’re creating imbalances and injustices that always impact folks of color the most.”

The mathematics of public transit

The county points to “fiscal constraints” in the cash flow from the state to the county as the primary reason for the possible changes.

Steve Hirshfeld, the transit planning program manager at the Wisconsin Department of Transportation, said public transit has a four-pronged funding model, including supplemental funds from the federal, state and local levels and ride fares. It is highly unusual that a form of public transit would be funded only by ride fares— Hirshfeld likened that model to taxicabs.

In response to what the county has called “a looming crisis,” county leaders have developed a Fair Deal for Milwaukee plan that calls for a larger piece of the shared tax revenue divided among all Wisconsin counties. The proposal intends to lessen the county’s budget gap, which is the reason for potentially reducing public transportation.

Jones and McCurtis both emphasized that funding carries real-life consequences for some Milwaukee residents.

“Access to transportation is a real issue, and frankly it’s a social justice issue,” Jones said. Bus route “cuts are going to impact the most vulnerable folks that we have in our communities: people who are disabled, people who are living paycheck to paycheck that now have to figure out how to get to work. These are things people with cars just don’t think about.”

McCurtis and Jones expressed concern that cuts would further isolate communities of color.

“Black people in Milwaukee need to be the beneficiary of their investment. They’re stakeholders. They spend money in these businesses, in these stores, to their landlords, but they aren’t receiving any benefits. We got to have some really serious conversations about this,” McCurtis said.

On the subject of racial injustice, the requested budget reads: “Racial equity was also given deliberate consideration in the preparation of this budget. While it was necessary to consider service reductions, efforts were made to avoid changes that have a disparate impact on minority populations or cause a disproportionate burden on low-income individuals.”

The next Transportation, Public Works and Transit Committee meeting is 9 a.m. Wednesday, Sept. 4 in Room 201B of the Milwaukee County Courthouse, 901 N. 9th St.