By Melanie Conklin, Wisconsin Examiner - Aug 23rd, 2019 10:45 am
Get a daily rundown of the top stories on Urban Milwaukee 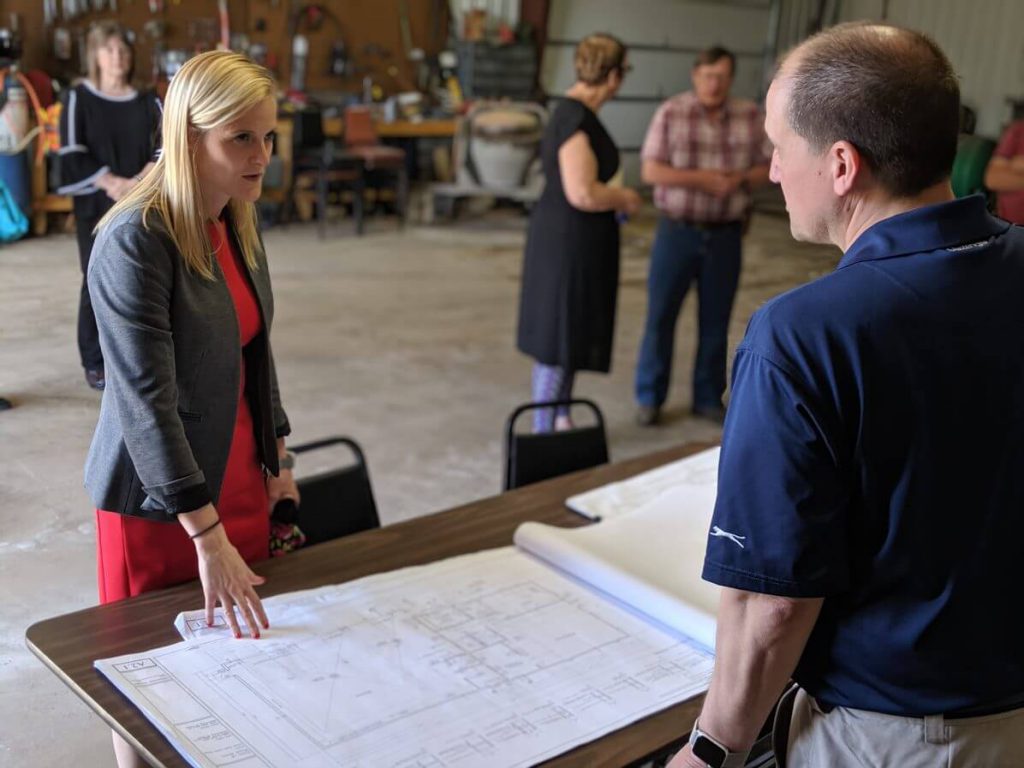 State Treasurer Sarah Godlewski learns about a BCPL-funded facility that will be built in Wood River. Photo courtesy of the Wisconsin Examiner.

The name, she says, makes the small agency founded in 1848 sound like a mini-Department of Natural Resources. It’s far enough off the mission that she says they’ve debated changing it. In reality, it involves overseeing investments that fund textbooks and technology for public school libraries in all 72 counties across Wisconsin. The board also manages nearly 80,000 acres of public land and makes low-interest loans to local governments.

“It’s actually more of an asset financial management agency,” says Godlewski. “We manage $1.2 billion and how we invest that money is really up to the commission. I lead the executive board deciding where are we going to put that money to make sure it has strong returns for schools. That provides a revenue stream to the fund. So we do timber sales, for example.”

Sitting on the board is one of the duties of her office, although it is a separate agency from the Treasurer’s Office. The other two commissioners are Attorney General Josh Kaul and Secretary of State Doug La Follette, also statewide-elected constitutional officers who lead their own separate agencies.

The BCPL is funded through its investments, with no taxpayer money, and has 10 staff between Madison and Tomahawk, according to its website. Sound fiscal management is crucial as its Common School Fund is a permanent school trust fund that is the sole source of state funding for public school library materials, including books, computers, software and other technical equipment. This year, says Godlewski the board will distribute $36.2 million, and 92% of those libraries rely on it as their only source of funding. She’s focused on diversifying those investments for greater returns, while investing more in Wisconsin-focused funds.

“If we weren’t providing funding in Stevens Point, or in Green Bay, or in Wausau, property taxes would have to increase to afford those things for the schools.”

‘We believe in science’

Most headlines the board generated over the past eight years were about partisan feuds.

Matt Adamczyk, elected treasurer in 2015, joined with then-Attorney General Brad Schimel to put a gag order on staff doing any work related to climate change. He also sought to cancel the agency’s New York Times subscription and remove the agency Executive Secretary Tia Nelson’s name from agency letterhead because her work on environmental and climate issue infuriated him. (Later that year, Nelson, the daughter of Earth Day founder Gov. Gaylord Nelson, left after 11 years on the job.)

At the time, Adamczyk and Schimel defended the ban as stopping political activity on state time. They asserted that climate change had no connection to BCPL work.

Asked about how the new board is different Godlewski starts with its immediate action to rescind both that 2015 gag order on advocacy on climate change and its practice of refusing to fund energy-efficiency projects.

“Oh yes, we overturned that ban,” says Godlewski of the unanimous board vote in February. “We now allow investment in renewable energy. We did a project at our last meeting that funded solar panels for a wastewater plant in Washburn.”

She calls it a win-win when the board can combine the goal of assisting taxpayers with low-interest local government loans with finding ways to benefit the environment.  “We are looking at how to lease our land for renewable energy–because we have plots of land that would be great for solar or wind,” she says. “We can partner with municipalities to do clean water, clean lake initiatives.”

To Godlewski it makes fiscal common sense to address climate change impacts including  erratic weather, severe flooding and other natural disasters that impact both the commodities market and the public land the board oversees.

A project like the solar panels — or anything that hinted at a Green New Deal — would not have happened under the past treasurer and board. Says Godlewski: “I mean, we believe in science and we’re not going to have a debate around whether that is a valuable investment or not, because we believe it is.”

Secretary of State La Follette says it has been a major improvement to have Godlewski (who he nominated for chair) and Kaul as his two fellow commissioners this year.

“The big change is that we’re cooperating now and approving school loans as the last treasurer refused to vote for the loans,” says La Follette. “We’re feeling our oats and can get things done. We are making better investments, doing better management of public lands and we are working with others to care for our land.”

He adds that before the past eight years with former Treasurer Kurt Schuller and “particularly” with the stridently rightwing Adamczyk serving the same four years as Attorney General Brad Schimel, there was little cooperation. Now current board of all Democrats has “come together.”

La Follette, who has sat on the board for several decades, hastens to add that the change is not simply about partisanship. Republicans and Democrats on the board had always been able to work together without massive disruption and controversy before, he says, “and used to cooperate despite partisan differences.”

Asked to cite an example of cooperation that had been stymied, he notes that he’s been raising a concern about deer eating baby trees so they don’t grow on public lands. “I was a lone voice for the past eight years under past management,” La Follette adds. “Now we are working with our bureau up north and others to analyze modern techniques to make sure the trees can grow. On our past board, one member just wanted to sell the land all off and forget about it.”