The Lady and the Light

For 33 years, the North Point Lighthouse was operated by an extraordinary woman 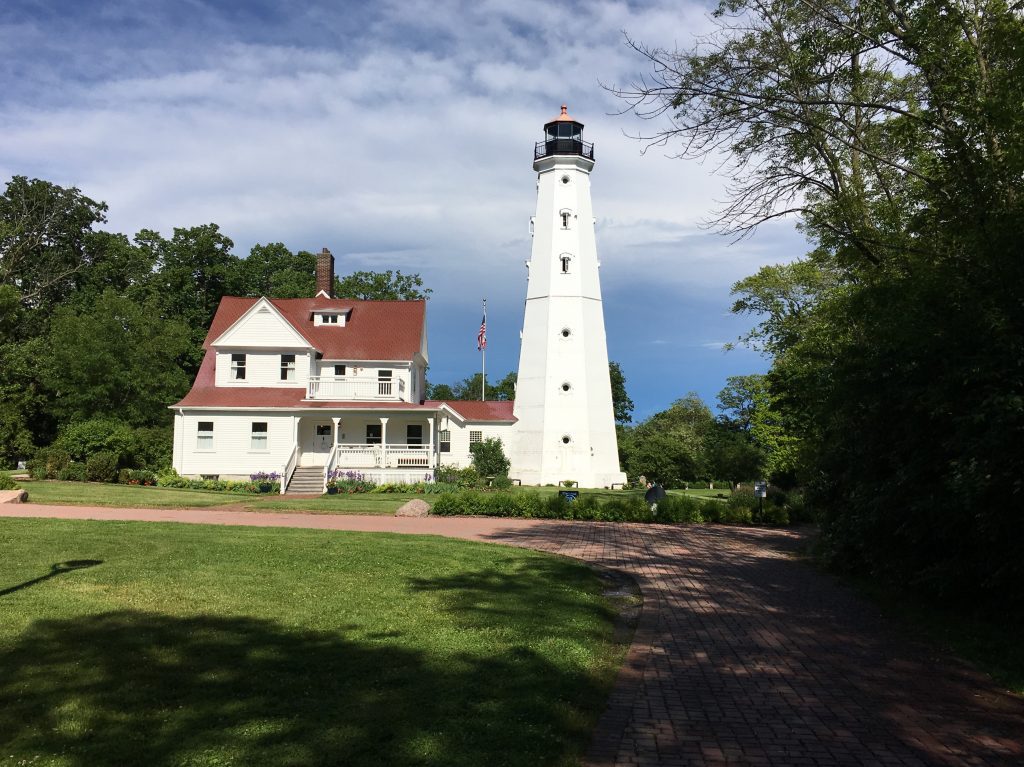 For 33 years, starting in 1874, the operation of the North Point Lighthouse in Lake Park was in the capable hands of an extraordinary woman. Photo by Carl Swanson.

If you visit the old lighthouse in Lake Park you will hear the surprising story of Georgia A. Stebbins, keeper of the North Point light for 33 years starting in 1874.

To put that in perspective notes the lighthouse website, it would be another 46 years before women were allowed to vote. Yet here was Georgia, duly appointed by the federal government and in sole charge of a vitally important maritime safety facility. 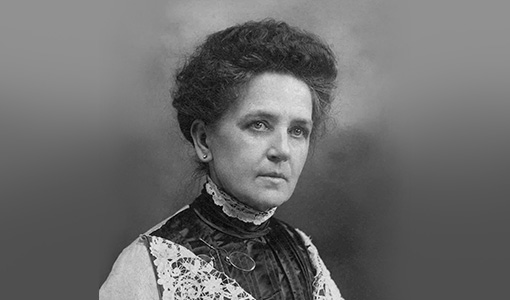 The story begins in New York City, where Georgia, then 27, was living with her husband, Lemuel, a jeweler and watchmaker. She became ill with tuberculosis, then untreatable and often fatal. Her doctor suggested relocating to a place with fresher air so Georgia moved to Milwaukee, where her father had recently been appointed keeper of the North Point Lighthouse

She told her history to a visiting reporter in an article published in the April 10, 1897, Milwaukee Journal.

“I have been here a long time; so long, indeed, that I cannot imagine what it would be to stay away from the light over one night,” she said. “My father, D.K. Green, was the lightkeeper then, but his health was not good and I began at once to perform the work. Since January 1874, I have never been away from the premises overnight.”

Her husband joined her several months later and opened a jewelry shop on East Mason Street. Georgia and Lemuel had one child, a son, born in the lighthouse.

Georgia unofficially performed her father’s work for seven years until the U.S. Lighthouse Service caught wind of what was going on—and promptly made her the official keeper. Georgia continued the work for 26 more years. 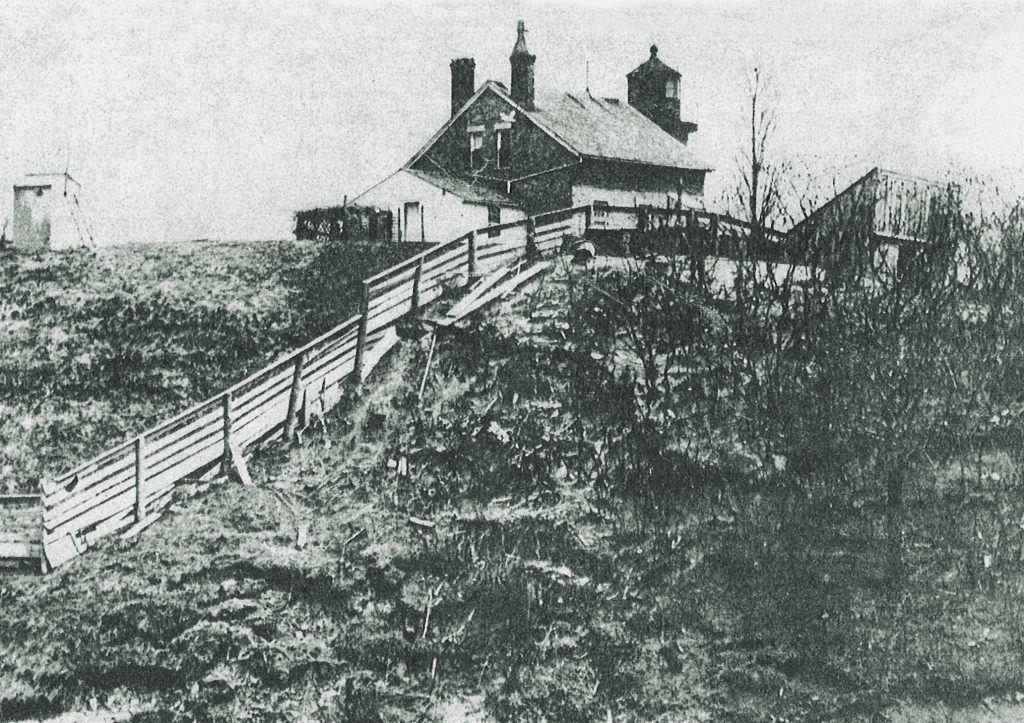 Lake Park didn’t exist when Georgia arrived at the remote northern end of Milwaukee Bay but the lighthouse there, built in 1855 on the edge of a high bluff, was one of the most important on Lake Michigan. It could be seen by vessels approaching the city from the north, south, and east.

Each evening—5 p.m. in the winter and 6 p.m. in the summer—Georgia cleaned and carefully filled 18-inch-high brass lanterns with mineral oil (two lanterns, they were changed at midnight), and recorded the amount of oil burned the previous night in a log book. She then trimmed the wicks and climbed the winding iron stairs and a ladder to the top of the tower.

There, 36 feet above the ground and 100 feet above the lake, she cleaned the windows and uncovered the heart of the North Point lighthouse—its fourth-order Fresnel lens, manufactured by Barbier, Benard & Turenne of Paris.

The massive lens magnified the lantern’s one-inch-square flame to the full size of the barrel-shaped lens—nearly three feet tall—creating a narrowly focused beam of light visible to ships at a distance of nearly 20 miles. Although gigantic, the lens was delicate and had to be covered with canvas during the day to prevent it from concentrating the rays of the sun and shattering.

At North Point, a section of this lens rotated thanks to a system of clockwork gears and weights. The revolving lens created a flash of white light lasting thirty seconds followed by another flash lasting fifteen seconds.

Georgia described her nightly routine in the 1897 Journal interview:

“The duties are very simple and I have never found them irksome. The lenses in the tower must be perfectly clean, the lamps must be kept in order and burning from sunset to sunrise. The machinery which operates the flash must also be kept clean and in order and wound up every four hours during the night.”

“I never go to bed before the lamp has been changed at midnight,” she said, “and my next visit is made at 4 o’clock in the morning. I can see the light from my bedroom window and I wake every hour while I am in bed. The habit of waking is so strong that I never vary a minute from that time.”

A few years after Georgia’s arrival, the original North Point light was threatened when the bluff on which it had been built started to erode. The present North Point Lighthouse and keeper’s residence was built, this one set well back from the crumbling bluff.

In addition to her nightly duties, Georgia was expected to track the passage of lake vessels in a logbook, write down weather observations, maintain the house and grounds to the lighthouse board’s exacting standards of cleanliness, and of course cook meals and tend to her family’s needs.

With the creation of Lake Park in 1893, Georgia soon had another chore on her hands—that of tour guide. Visitors to the park, a great many of them in the warmer months, would knock on the door and Georgia would show them through her home and the lighthouse. 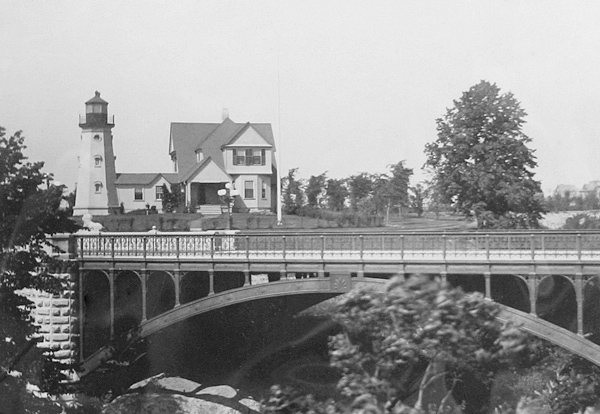 In introducing Georgia to readers in the April 10, 1897, Journal, the reporter wrote, “Thousands upon thousands of precious human lives and property to the value of untold millions are literally placed in the care of the lighthouse keeper. If the light should fail or grown dim for even one minute all their lives and property would be imperiled, and probably great destruction of both would follow. As a rule, the persons who bear these great burdens of responsibility are modest and unassuming; and when they have served long, all their lives are involuntarily modeled to conform to a fidelity to duty engendered by the rules of accuracy which their official duties require.”

Sounding modest and unassuming, Georgia told the reporter, “It seems to me a lighthouse is a commonplace affair, and it seems to me the work of taking care of the light is very ordinary indeed.”

She added, “I have grown very much attached to the work and I have a sort of affection for every object connected with it. This latter is especially true of the lenses and lamps in the tower. They are my pets and I should feel a genuine grief if any misfortune should overtake them.” 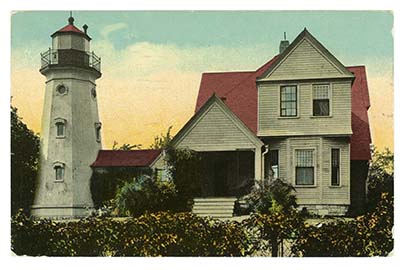 The present lighthouse and keepers quarters opened in 1888. The height of the tower was later increased. Postcard courtesy of the North Point Lighthouse Museum.

The first was Hannah Thomas, who took over as head keeper at Gurnet Point near Plymouth, Massachusetts, when her husband, John joined the Continental Army to fight in the Revolutionary War. He died of smallpox on June 2, 1776. Along with raising their three children, Hannah worked John’s lighthouse post, making her the first female lighthouse keeper in America.

According to the book Brilliant Beacons by Eric Jay Dolin [Liveright Publishing, 2016], women most often were appointed lighthouse keepers on the death of their husbands. In fact, Stephen Pleasanton, the first head of the Lighthouse Bureau, preferred to hire widows of deceased keepers since they had assisted their husbands and thoroughly understood the duties involved.

The first woman lighthouse keeper on the Great Lakes was Rachel Wolcott. Her husband, Revolutionary War veteran, Benajah Wolcott, was appointed to the Marblehead Lighthouse in Sandusky, Ohio in 1822. When he died of cholera in 1832, Rachel became the keeper.

Many other women followed in her footsteps. Coast Guard Public Affairs Specialist L. Laughlin, in an article published on the Coast Guard’s website, wrote, “These female lighthouse keepers not only had federally appointed jobs, but they received equal pay. Several female lighthouse keepers in the Great Lakes, such as Jane Enos, had lower-paid male assistants. Enos became keeper of the St. Joseph Lighthouse in St. Joseph, Mich., after her husband, the previous keeper, died. She served as primary keeper from 1876-1881 and had several male assistants.”

Several female keepers lost their lives in the line of duty, usually from drownings, accidents, or illnesses. But the death of Mary Terry in 1886 remains one of the true mysteries of the Great Lakes.

Mary Terry’s husband was appointed as the first keeper of the Sand Point Lighthouse in Escanaba, Mich., but he died while the light was still under construction. Mary took over as keeper and she lit the lamp for the first time. She did not have children and lived at the lighthouse alone for two years until the lighthouse caught fire in March 1886.

Investigators discovered the door had been forced open. Only fragments of Mary’s body were ever found.

“The women lighthouse keepers of the Great Lakes served their country with distinction at a time when employment for women was very limited,” wrote Laughlin. “They truly illuminated the path for future women.” 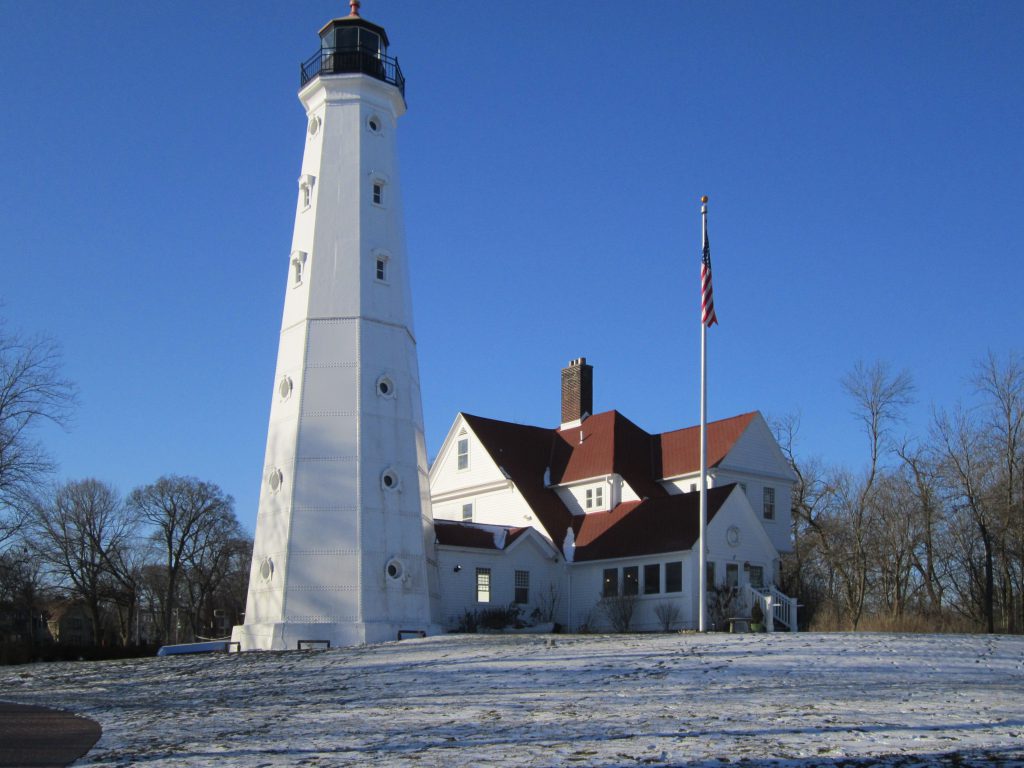 Thanks to Mark Kuehn, curator of the North Point Lighthouse Museum for his assistance. Visit northpointlighthouse.org for information on touring the lighthouse and museum.