The Future of Wisconsin Gerrymandering

How to Steal an election. Image by Steven Nass (Own work) (CC BY-SA 4.0), via Wikimedia Commons.

In writing for the court’s five to four majority, Chief Justice John Roberts made it clear that both “districting plans at issue here are highly partisan, by any measure.” Here is a taste of his description of the North Carolina gerrymander:

Roberts is no kinder to the work of Maryland Democrats:

The Maryland Legislature—dominated by Democrats—undertook to redraw the lines of that State’s eight congressional districts. … The Governor later testified that his aim was to “use the redistricting process to change the overall composition of Maryland’s congressional delegation to 7 Democrats and 1 Republican by flipping” one district. … To achieve the required equal population among districts, only about 10,000 residents needed to be removed from that district.

It’s worth noting that this stance is very different from that taken by the Wisconsin Republicans. They continued to claim that their gerrymander resulted from the state’s geography.

Roberts dismisses one of the chief arguments of the gerrymander defenders, noting that they:

… suggest that, through the Elections Clause, the Framers set aside electoral issues such as the one before us as questions that only Congress can resolve. … We do not agree. In two areas—one-person, one-vote and racial gerrymandering—our cases have held that there is a role for the courts with respect to at least some issues that could arise from a State’s drawing of congressional districts.

Thus, the courts have already crossed that Rubicon.

Taken along with the earlier Wisconsin case, Gill v. Whitford, the Rucho decision represents a kind of bait and switch. In Whitford, “we held that a plaintiff asserting a partisan gerrymandering claim based on a theory of vote dilution must establish standing by showing he lives in an allegedly ‘cracked’ or ‘packed’ district.” And so lawyers representing Wisconsin’s Democrats did just than, only to see the standing question largely ignored in Rucho.

Why, then, does Roberts conclude the courts should not get involved with partisan gerrymanders? His decision revolves around an exaggerated view of the difficulties involved.

… the fact that such gerrymandering is “incompatible with democratic principles,” does not mean that the solution lies with the federal judiciary … partisan gerrymandering claims present political questions beyond the reach of the federal courts.

After dutifully reciting each case’s facts, the majority leaves them forever behind, instead immersing itself in everything that could conceivably go amiss if courts became involved.

For the first time ever, this Court refuses to remedy a constitutional violation because it thinks the task beyond judicial capabilities.

And not just any constitutional violation. The partisan gerrymanders in these cases deprived citizens of the most fundamental of their constitutional rights: the rights to participate equally in the political process, to join with others to advance political beliefs, and to choose their political representatives. In so doing, the partisan gerrymanders here debased and dishonored our democracy, turning upside-down the core American idea that all governmental power derives from the people. These gerrymanders enabled politicians to entrench themselves in office as against voters’ preferences.

So the only way to understand the majority’s opinion is as follows: In the face of grievous harm to democratic governance and flagrant infringements on individuals’ rights—in the face of escalating partisan manipulation whose compatibility with this Nation’s values and law no one defends—the majority declines to provide any remedy.

Roberts argues that others, either Congress or others, may have a remedy. For example,

The first bill introduced in the 116th Congress would require States to create 15-member independent commissions to draw congressional districts and would establish certain redistricting criteria, including protection for communities of interest, and ban partisan gerrymandering.

Unmentioned is that so long as Republicans control the US Senate, this bill will go nowhere.

Likewise, state efforts to set up independent commissions face serious obstacles, including from Roberts himself. He joined a dissent that would have blocked a commission adopted by a majority of Arizona voters.

Furthermore, many states–like Wisconsin–lack any provision for a referendum that would allow voters to establish a commission over the opposition of legislators who benefit from gerrymandering. Even where voters have that ability, efforts to take redistricting out of politics face legal challenges from those benefiting from gerrymandering. In Michigan, for instance, a federal lawsuit challenges the nonpartisan redistricting commission established by a voter-approved amendment to the state constitution. If successful, this challenge could affect other states, such as California, with similar commissions.

Opponents of gerrymandering should expect little relief from the federal courts, at least with the present justices. Probably the best route is to exploit the bipartisan unpopularity of gerrymandering. For example, this January’s Marquette poll asked whether responsibility for redrawing maps of legislative districts should rest with the state legislature and governor or a non-partisan commission. 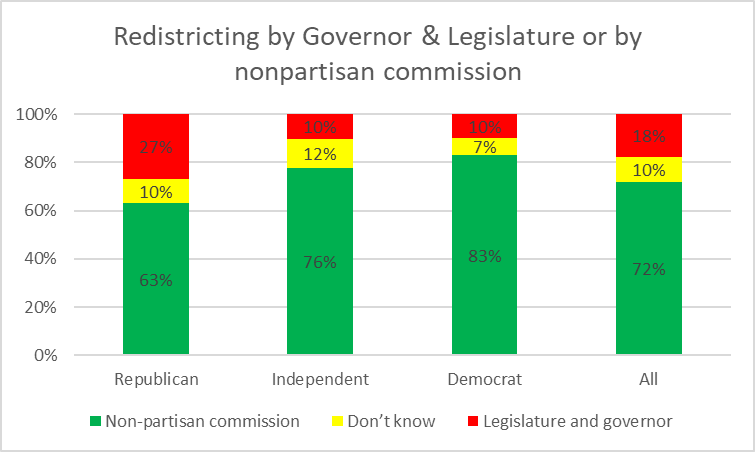 Democrats, led by Barack Obama and Eric Holder, will stop at nothing to gerrymander Democrats into permanent majorities. They believe the courts, not the voters, should pick the winners and losers in our elections and that the ultra-liberal representatives they put into office will pass their radical left-wing agenda.

Governor Scott Walker knows how important it is that we fight back before all our pro-growth reforms are wiped away. Join Governor Walker and the NRRT to fight back against the Democrats’ nationwide power grab.

The Democrats are laser-focused on reversing Republican gains in redistricting control and imposing their anti-democratic extreme gerrymandering schemes across the country.

Given that the Republican party has recently evolved into the gerrymandering party, it is easy to forget that politicians from both parties both practiced it. Roberts quotes Democratic Congressman Steny Hoyer, the US House majority leader, describing himself as a “serial gerrymanderer.”

The unpopularity of gerrymandering among voters may help explain the fate of the recent suggestion that the legislature could redistrict Wisconsin by joint resolution, thus cutting out Governor Evers, allowing the Wisconsin gerrymander to extend over the coming decade. To do so would require reversing a 1964 decision in State Ex Rel. Reynolds v. Zimmerman, in which the Wisconsin Supreme Court declared that:

The apportionment of both houses of the legislature is vital to the functioning of our government. There is just as much reason for considering it as one of the basic functions that requires full legislative treatment as any other major phase of government activity which admittedly requires joint action by the legislature and the governor.

The quick denial by Republicans of any intention to bypass the governor may reflect the unpopularity of gerrymandering. Yet a comment by Rick Esenberg that a joint resolution is “the only way out of … an assured impasse” suggests that Republicans may bring the idea back. After all, impasses are usually considered bad.

One thought on “Data Wonk: The Future of Wisconsin Gerrymandering”