6 Questions for Legislators on Guns

How many state residents have guns? How many favor background checks, other laws? 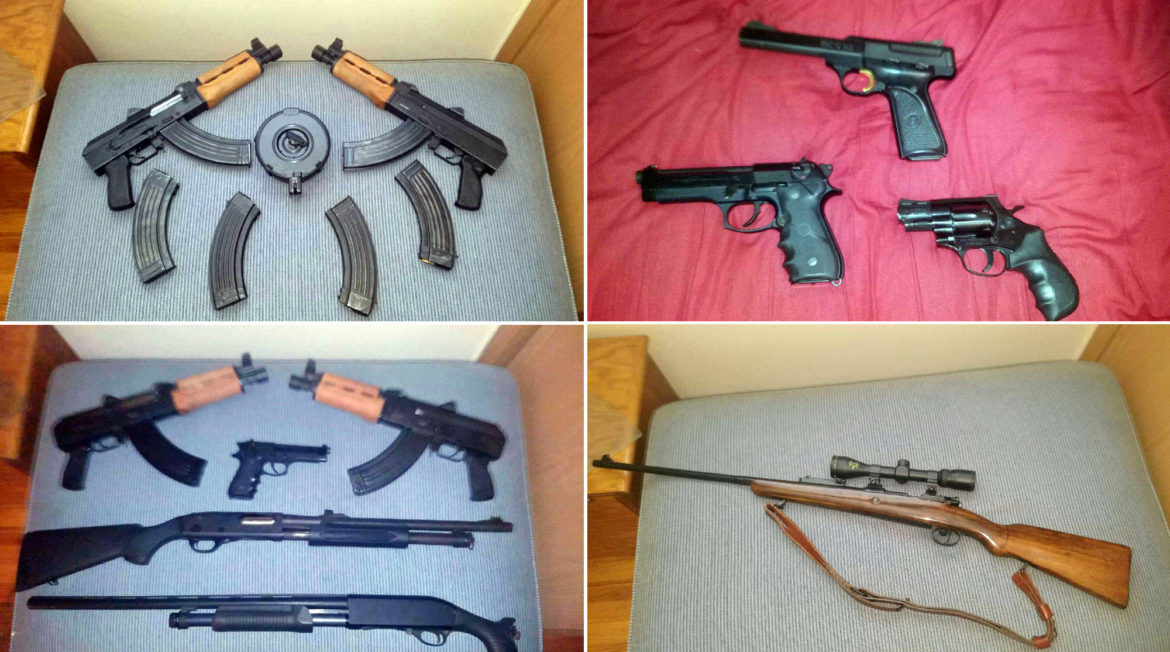 Guns. Photo courtesy of the Wisconsin Center for Investigative Journalism.

You three leaders said you would try to meet this week to discuss potential new legislation in the wake of mass shootings in El Paso, Texas, and Dayton, Ohio. Before you meet, you may find some of these questions — and answers — helpful.

2. How many residents over age 21 have permits to carry concealed weapons? Wisconsin began issuing CCW permits on Nov. 1, 2011.

According to the state Department of Justice, 365,886 adult residents had CCW permits as of Aug. 3. That means about one in 10 adults been issued permits. But that certainly doesn’t mean one in 10 people you encounter every day is packing a handgun.

Concealed weapons are allowed in the Capitol, unless there is a “no firearms allowed” sign on the official’s office door. Wisconsin is also an “open carry” state for shotguns and rifles.

3. What is a ”Red flag” law? Atty. Gen. Josh Kaul has called for passage of a so-called “red flag” law, which would allow the temporary confiscation of guns owned by someone a judge finds likely to harm others. Ohio Gov. Mike DeWine, a Republican, proposed such a law in the wake of the Dayton mass shooting.

Has anyone drafted a proposed “red flag” law for Wisconsin? No.

Governor, after the Texas and Ohio shootings, you expressed interest in a “red flag” law. But, in February, you had a chance to make it part of the 2019-21 budget package you gave the Legislature. You didn’t include it.

Nik Clark, president of Wisconsin Carry, said “red flag” laws are nothing but an excuse to take away guns legally owned by law-abiding citizens Those laws “shred” the right to own weapons guaranteed by the U.S. Constitution, Clark added.

Speaker Vos, after the Texas and Ohio tragedies, you Tweeted that you could not support any change that infringe on “due process” rights. Does that mean you oppose a “red flag” law?

4. Is there support for “universal background checks” which would close the so-called “gun show” loophole? Governor, you called for changes to require a background check before “every” weapon was sold.

Franklin said MU polls found that support for background checks “has always been above 75 percent.”

“In 2013, it was 77 percent and has been slightly higher in 2016 and 2018 at 85 percent and 81 percent, respectively,” Franklin said. “That is a modest difference and the main point is how unusually high support for background checks has been each time we’ve asked. Few issues approach such a large majority.”

Background checks are also a rare case of partisan agreement, with 76 percent of Republicans, 78 percent of independents and 86 percent of Democrats favoring them, according to the Marquette poll.

5. Is there support to ban “assault-style” weapons, which were outlawed by federal law until 2004? MU polls have found less support for that: A “consistent majority” of about 54 percent in favor, with 42 percent opposed, Franklin noted.

6. How politically active is the National Rifle Association (NRA) in Wisconsin? The Wisconsin Democracy Campaign reported that, between 1998 and 2018, the NRA spent more than $5.5 million backing Republican candidates.

That included NRA spending last year to re-elect two Republicans, Gov. Scott Walker and Atty. Gen. Brad Schimel. Neither will be at any Capitol meeting on gun issues this week.

2 thoughts on “The State of Politics: 6 Questions for Legislators on Guns”