Foxconn Jobs Not Worth The Cost

New analysis shows the cost to taxpayers per job outweighs the return.

By Melanie Conklin, Wisconsin Examiner - Aug 6th, 2019 10:46 am
Get a daily rundown of the top stories on Urban Milwaukee

Foxconn jobs may cost state taxpayers between $172,000 to $290,000 per job and Wisconsin might only receive benefits equal to only about one-fifth of Foxconn direct incentive costs.

These dire economic outcomes were part of an economic analysis released Monday by Upjohn Institute for Employment Research senior economist Tim Bartik, who has been closely monitoring the Foxconn project. Gov. Tony Evers’ administration sought the guidance as Foxconn’s plans changed from what was agreed upon in the 2017 contract with then-Gov. Scott Walker.

“The main conclusion is that Foxconn-level incentives are extremely costly per job,” Bartik explains, “whether compared to typical incentives in the U.S., Wisconsin past practices, or recent incentive offers to Amazon by New York and Virginia.”

Bartik’s report indicates that even if there is a revised contract based on the scaled back operation and more realistic job expectations that are far lower than originally promised by Foxconn, the state would still be hard pressed to come out ahead.

Fiscal benefits to Wisconsin of Foxconn from tax revenue of new jobs, he indicates, “would offset no more than one-fifth of Foxconn direct incentive costs.” This is in part because Foxconn incentives cost six to 10 times more per job than typical Wisconsin incentives, by Bartik’s estimates. It is also more than three times higher than New York’s offer per job to Amazon and more than 13 times higher than Virginia’s per job offer to Amazon.

Foxconn costs per job are also seven to 12 times greater than the average investment or job credit offer given by states in general, according to the report. 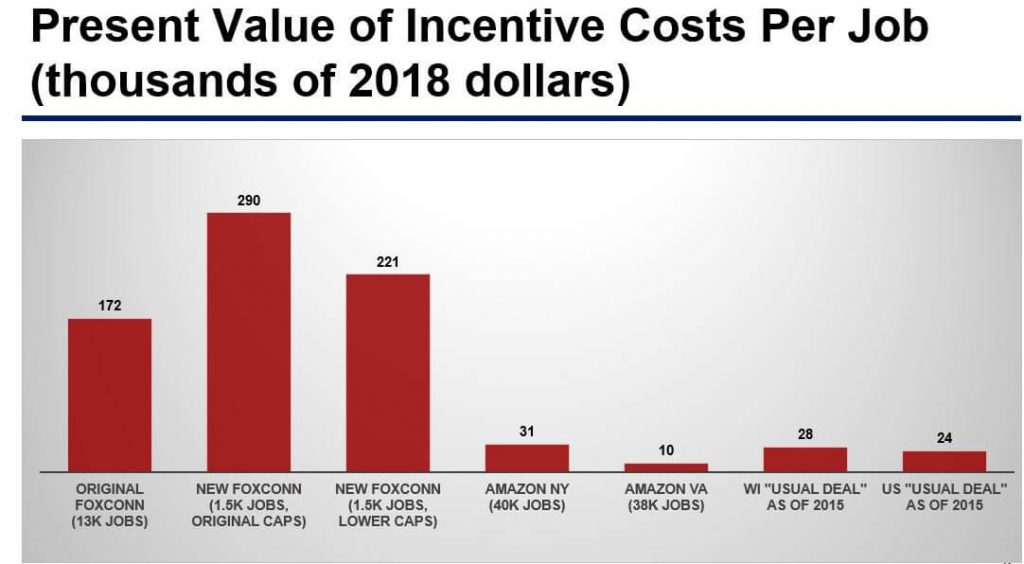 “The bottom-line is that it is pretty hard for any incentive contract that is so expensive per job to have net benefits for state residents,” Bartik explained straightforwardly in a summary of his findings on Twitter. “New jobs are valuable to state residents by increasing employment to population ratios. But these benefits aren’t enough to outweigh the costs of paying for the incentives.”

Bartik conducted this report for the State of Wisconsin Department of Administration (DOA).  He notes that the original Foxconn contract was promoted to provide 13,000 jobs in a Generation 10.5 flatscreen manufacturing facility. This is no longer Foxconn’s plan. More recent job estimates for its downsized operation have been closer to just 1,500 – 1,800 jobs.

His 19-page memo shares his conclusions on costs and benefits of the Wisconsin Foxconn deal under various scenarios. (He notes, “The conclusions are my own and do not necessarily reflect anyone else’s views.)

When changes began emerging, Brennan says, “To both promote and protect Wisconsin’s economic development interests, we sought expert advice and counsel to analyze the original and revised project.” DOA looked to the Upjohn Institute for guidance as “a non-partisan independent think tank that conducts research into various aspects of economic development, including state incentive programs.”

Brennan notes that as the project continues to evolve, the Evers administration will continue to seek input from other stakeholders, experts and interested parties, including industry experts: “It is valuable to the administration, policy makers, businesses and taxpayers to understand how this project could affect Wisconsin.”

Count Mark Hogan, the secretary and CEO of the Wisconsin Economic Development Corporation (WEDC), as someone who disagrees with Bartik and Brennan. In an email his spokesperson shared with the Examiner, Hogan disputed the findings of the report.

“This study makes assumptions that could not occur under the existing ‘performance-based’ contract between WEDC and Foxconn,” says Hogan’s statement. “The plain fact is the company would not be able to retain any incentives if, by the year 2023, it had only created either the 1,500 or 1,800 jobs the study is based on. As a result, any calculations about the effects of tax credit payments to Foxconn on other state spending priorities – and their impact on the broader Wisconsin economy – are purely theoretical.”

Hogan refused a request from Wisconsin Examiner to be interviewed to answer further questions. Hogan was appointed by Walker and lame-duck law changes he signed into law forced Evers to keep Hogan as WEDC head until at least Sept. 1, 2019. Evers has said he is beginning a search for Hogan’s replacement.

Bartik told the Examiner, he sees it differently: “I guess I will just have to agree to disagree with Mr. Hogan. I don’t think that it’s a very persuasive defense of the Foxconn deal to say that it’s not so expensive per job if Foxconn defaults on its contract, because then Wisconsin will claw back the incentives.”

The current Foxconn contract, Bartik explains, “is equivalent to providing Foxconn with a large no-interest loan, which might be repaid at some point if Wisconsin is able politically and legally to enforce some of the clawback provisions in the contract.”

The original contract creates a liability for Wisconsin if Foxconn for whatever reason does not pay back these “clawback” costs, “including meeting the minimum job creation requirements,” says Bartik.

Bartik’s advice to DOA is that it “seems appropriate,” given the drastically reduced estimates of jobs that will be created, that “Wisconsin will enter into a new incentive contract with Foxconn, to reflect the revised project.”

His memo offers analysis of what that contract might look like, if it simply follows the credit rates of the original deal, which is how he reaches estimates on cost-per-job and incentive comparisons. But those do not have to be a new agreement’s perimeters.

“The project does have a better benefit-cost ratio if the incentive costs are significantly cut back,” he continues in his findings. “If the state government decides to move ahead with the Foxconn incentives, the details of how the Foxconn incentives are limited or capped make a big difference in the project’s net benefits.”