Public Table is ‘Art on the Plate’ 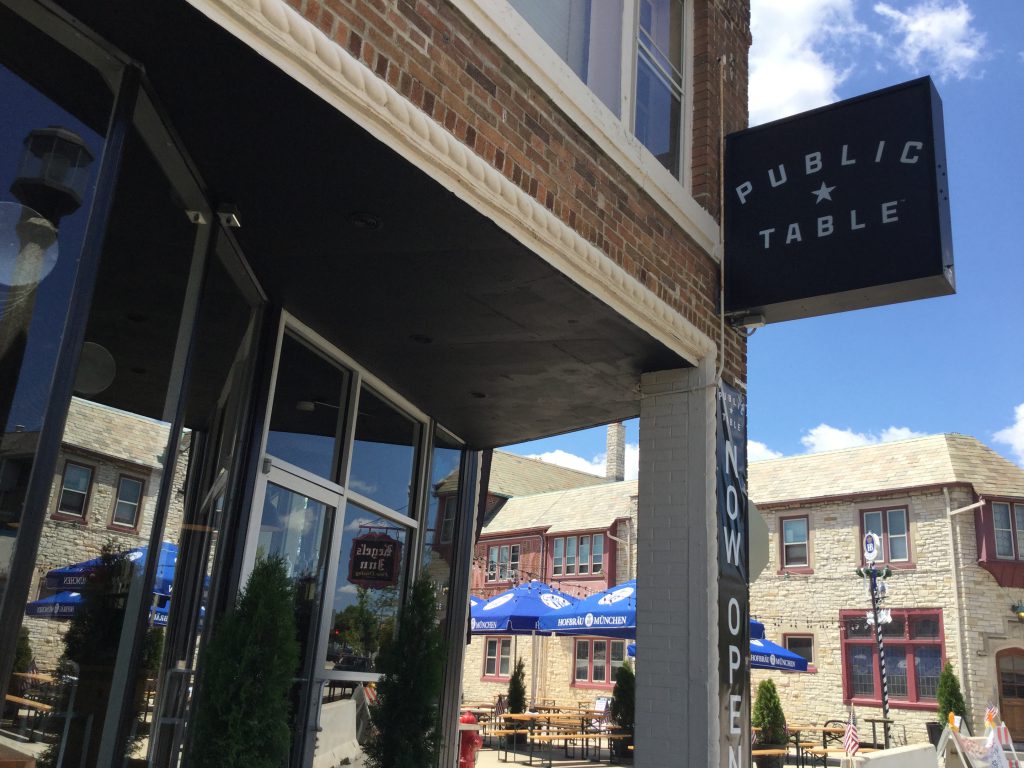 Surprised and delighted! That pretty much summed up my response to the Public Table in West Allis. Even the first of my three visits was memorable, not because the restaurant blew a fuse and we had to forgo lunch, but because our server told us the chef was in the kitchen chopping onions and mushrooms by the light of a flashlight. After treating us to small glasses of City Lights’ Coconut Porter, we went on our way, but not before reading the relatively brief menu. We knew we would return soon.

The restaurant, open less than a year, is small: a dozen tables and a few seats at the bar. It has a much-expanded space in summer as it shares a beer garden with Kegel’s in a section of 59th Street closed to traffic during the warm months. They also share a stage on the street with Kegel’s, where there’s live music Friday, Saturday, and Sunday, a mix of polka, jazz, and rock.

Owners Randy Braisher, Chris Kuranz, and Johnny Clark, three entrepreneurs who had never worked in a kitchen, conferred with a consultant to determine a menu that would satisfy both people who wanted a light meal and those looking for something more substantial like the Cochon De Fue, or Fiery Pig.

Clark told my companions and I that the Pig was his invention. One morning he wanted something “Hot, Fatty, and Spicy,” which perfectly described this flatbread with its gooey blend of three Wisconsin cheeses, a light red sauce flecked with red pepper, and chunks of pork belly that, excuse the cliché, melted in my mouth. Clark said they braise the pork belly overnight, then, put it in a really hot oven to get that combination of fatty, crunchy, crispy.

Another flatbread, Roasted Brie and Mushrooms, was covered with spicy arugula, adding a third layer to the flavors of the brie and chopped mushrooms. As in the Fiery Pig, the thin flatbread held the filling without overpowering the toppings.

We discovered, on my second visit, this restaurant is truly unique, because as soon as we sat down, our server brought an amuse bouche, slices of organic cucumber sprinkled with Hawaiian black salt.

When we perused the menu, we noted the sliders and a flank steak sandwich suggested a slant towards bar food. When we dug into the Wisconsin Meadows Beef Sliders, they said otherwise. First the buns, Breadsmith buns, lightly toasted were soft, yet crisp, as if they had just exited the oven. The slider, the cheese spread and the pickles stayed inside, instead of oozing out, as often happens.

For the Pulled Pork Sliders, the chef combined roasted shredded pork with sweet-sour apple cider BBQ sauce, house-made coleslaw, and sweet pickles. It was spicy, juicy, crunchy, a potpourri of delectable flavors, all neatly packed inside a mini bun.

Vegetarians will want to order the Portabella Mushrooms Sliders with kale pesto, roasted red pepper, and grilled onion.  Also, on the lighter side, coming soon according to Clark, a couscous salad and hummus with curried vegetables.

Another vegetarian entrée, the Tomato Mozzarella Tower, a vertical caprese with a sly reference to that other familiar tower. Shaved fennel on the peak, contrasted with the soft cheese and tomato. It was a masterpiece of design on a plate. The chef added toast points drizzled with chili oil and basil oil, not your Italian Grandmother’s caprese, a piece de resistance to be savored and shared.

Also, a specialty, Roasted Organic Carrots with maple glaze, was a dish almost too pretty to eat, elegant in presentation, a plate of simply prepared root vegetables.

The Vegetarian Chili, essentially a bowl of vegetables with some serious heat, even without the Fresno red chilis, was a healthful choice, as was the Vegan Corn Chowder. The chowder, made with vegetable broth and coconut milk, overflowed with sweet corn. It too had some spicy heat from a few red chili flakes.

We were surprised and delighted at the end of our meal, when our server brought tiny towels in a dish and poured hot water on them, a classy touch.

And so is the owners’ commitment to the Hunger Task Force. For each meal they serve, they make a donation which provides formula to feed babies at local food pantries.

This is a special place, or as one of my companions said, “Not only is the food a happy marriage of bar food and fine dining, but that tower, wow, art on the plate.” 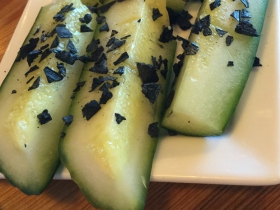 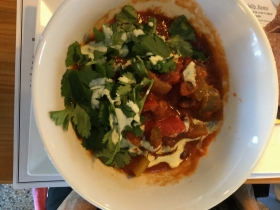 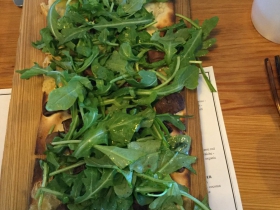 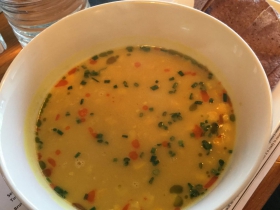 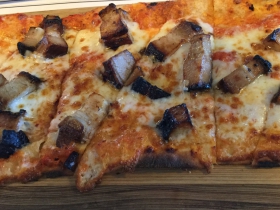 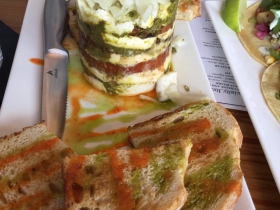 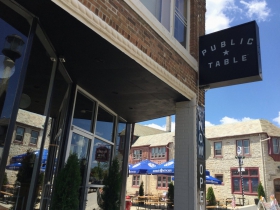 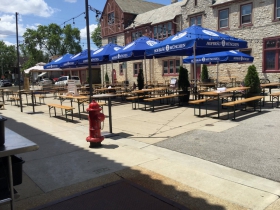 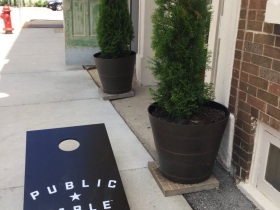 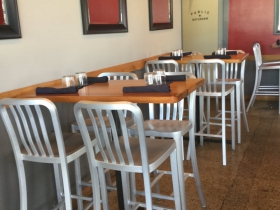 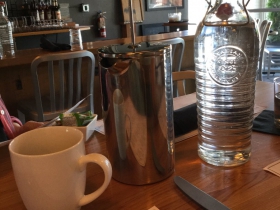