And 95% were men. Dane County arrests are even more disproportionate racially.

By Gretchen Schuldt, Wisconsin Justice Initiative - Jul 29th, 2019 01:20 pm
Get a daily rundown of the top stories on Urban Milwaukee

The review, a joint effort of the Wisconsin Justice Initiative and the American Constitution Society Milwaukee Lawyer Chapter, thus far has covered 24 counties, or one-third of the 72 counties in the state.

Milwaukee County had the largest gender gap among cannabis case defendants. A whopping 95 percent of the 288 people charged with marijuana crimes or misdemeanors were men, far more than in most counties reviewed thus far. Dane County, where 90 percent of 125 defendants were male, had the second-highest share of male defendants.

Green County, where there were just 27 criminal cannabis cases last year, came in third. Twenty-four of the defendants, or 89 percent, were men.

Forest County may have had more female marijuana defendants than male. If so, it would be the only county reviewed thus far where the number of female defendants exceeded the number of male defendants. There were 19 men and 23 women charged with cannabis crimes last year, but there also were seven charged whose genders are listed as “unknown” in online court records. The actual genders of those seven would determine whether Forest County actually was a female-majority cannabis defendant county.

(And yes, we understand that gender is not necessarily binary, but it is for court purposes.)

Dane County was the least likely among the 24 counties to issue criminal cannabis charges against anyone. Dane County filed one criminal case containing a marijuana charge for every 4,339 county residents. Milwaukee County, which filed a cannabis case for every 3,292 residents, had the second-lowest rate. 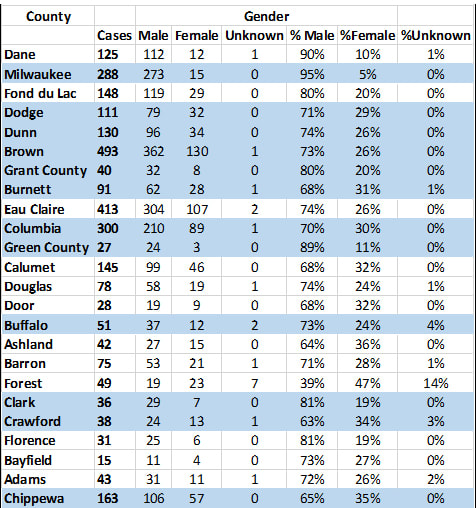 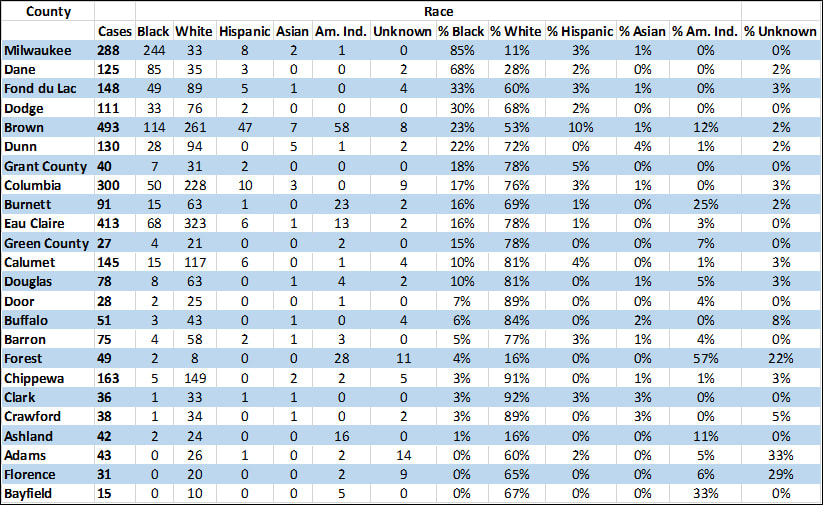 As these charts illustrate, there is not much that is consistent in cannabis enforcement in Wisconsin. Two people engaged in similar conduct in different counties may well be treated very differently by the criminal justice system.

Follow along as we document the wildly erratic enforcement of cannabis laws in Wisconsin. Additional data for each county is posted on The 2019 Pot Page.