Money spent on buybacks could be used to hike worker pay.

Kohl’s Corp.. Photo by Tara Golshan of the Wisconsin Center for Investigative Journalism.

Exorbitant executive compensation has continued to grow despite widespread condemnation. Last week’s Data Wonk column examined evidence about the role played by stock buybacks, in which companies buy shares of their own stock. But did buybacks also play a role in holding down worker pay?

These questions lead to policy decisions, including whether a 1982 decision allowing the widespread use of buybacks should be reversed, as envisioned by Wisconsin Senator Tammy Baldwin’s Make Work Pay Act.

Do stock buybacks give a double whammy to the Pay Ratio?

In 1982, during the Reagan administration, the SEC greatly relaxed the rules on stock buybacks. Since that change, the pay ratio took off, passing 300 before dipping in the recent recession. Currently, the pay ratio has been climbing again, passing 300 in 2017. 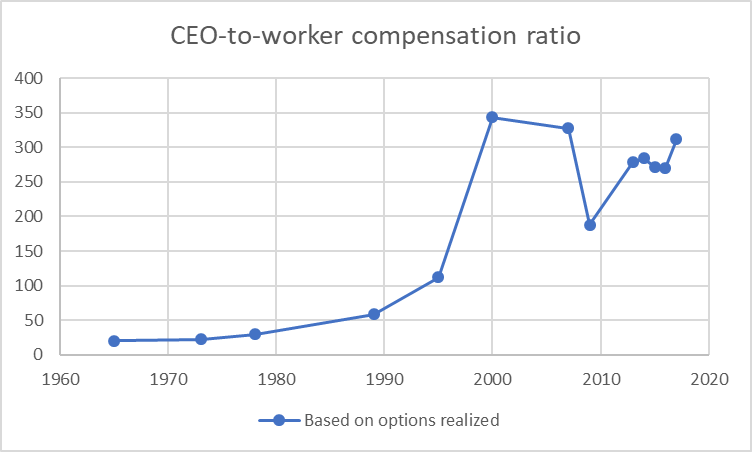 Recently, the SEC has begun to require public companies to include their own pay ratio in their proxy statements. The chart below shows the pay ratios, as orange circles, and the median employee pay, as blue columns, reported by the six Milwaukee-based companies discussed last week.

CEO pay is very similar at the six firms, ranging between $9.1 million and $12.5 million. The big variation is in median employee pay: the six CEOs made anywhere from 2,508 times more than the median employee to 91 times more for WE Energies.

It is clear from the data that most of the workers for Kohl’s and Manpower last year were part-timers. Half the Kohl’s employees made less than $11,070 and half of Manpower’s made less than $4,563. 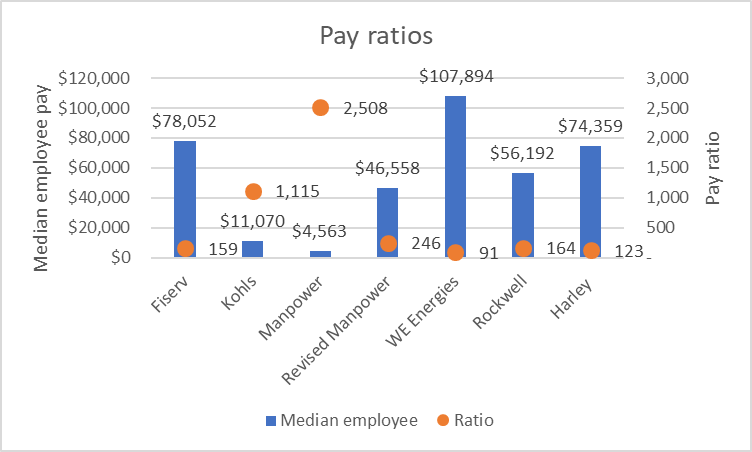 If the median employee is a part-timer, as with Kohl’s and Manpower, annualizing that person’s pay could give a more realistic picture.

Does the cost of share buybacks depress worker pay?

It is clear that most of the growth in the pay ratio is due to an exploding numerator—CEO compensation. But did the cost of buybacks also depress the denominator—worker pay? The worker-oriented Roosevelt Institute in its report on buybacks analyzed how much annual employee pay could rise if spending on buying back company stock were instead directed towards employee pay. Roosevelt analyzed the five largest purchasers of stock in each of three industries–restaurants, retail, and food manufacturing.

Here are the results for five restaurant chains, calculated by dividing the total cost of buybacks by the employee count. For instance, without share buybacks, Domino’s Pizza could give each employee a $2,445 raise and Starbucks could pay $7,119 more. Yum Brands includes Taco Bell, Pizza Hut, and KFC, while Restaurant Brands Intl has Burger King, Tim Hortons, and Popeye’s. But the possible pay hike for employees was even higher for retail chains and still higher for food manufacturers.

Here are the results for the five retail chains.

Here are the results for the food manufacturers.

This approach can be applied to the Milwaukee firms. Here is the approximate cost per employee for each of the firms. Put another way, these are the amounts that could be applied to employee compensation. As before, estimating the amount per employee for Kohl’s and Manpower is problematic. According to the Kohl’s annual report, it has 129,000 employees, 34,000 of whom are full time. I used the latter figure. Likewise, Manpower counts 23,000 regular employees and “millions” of contract employees or associates. I used the figure for regular employees. 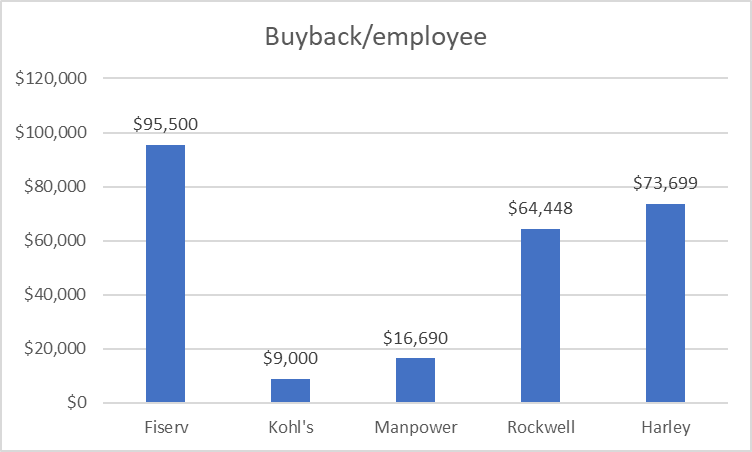 The message of these calculations is that employers could, in the absence of buybacks, afford to pay their workers a lot more. The question, then, is why don’t they want to give raises? That comes back to the economic question: what role do buybacks play in slow growth and rising income inequality?

Are Stock Buybacks Starving the US Economy?

Time and again, corporations’ annual reports show dividends and buybacks consuming an amount near to or greater than their net earnings. Are buybacks consuming resources that could be used to develop new products or improve existing products and processes?

Typically, management argues that the market underprices its stock, so that buying them is a good investment. However, if low share price were the motivating factor, one would expect buybacks to decline when the stock market is high. If anything, the opposite is true: companies increase their buybacks in bull markets and reduce them when the market is down, effectively buying high and selling low.

Not everyone agrees that buybacks are to blame for slow growth and rising inequality. For instance, see this article that argues (1) much of the capital distributed to shareholders through buybacks is returned to the firms through issuing new stock, (2) R&D is usually expensed, and (3) smaller firms are better than those in the S&P 500. (It should be noted that their first point, if true, undermines that argument that buybacks benefit shareholders by shrinking the number of shares.)

The article starts by quoting Boeing’s CEO: “Boeing has won in the marketplace for 100 years because of innovation, and we need to continue to invest in innovation for the future.” Ironically, the two Boeing plane crashes have been attributed to Boeing’s reluctance to spend the estimated $6 billion to redesign its 737 to accommodate heavier engines.

It appears that many public companies, in using stock buybacks to inflate their executive compensation, suffer what business schools call an “agency” problem. If there is a conflict between the firm and the executives running the firm, whose interest rules? Baldwin’s Make Work Pay Act, would ban open market stock buybacks to address the agency problem. Thus, it would remove an inherent conflict of interest between the executives and the company (including all of its employees) that they run.