The ultimate nice guy, but funny, does his new standup act at the Pabst on Saturday. 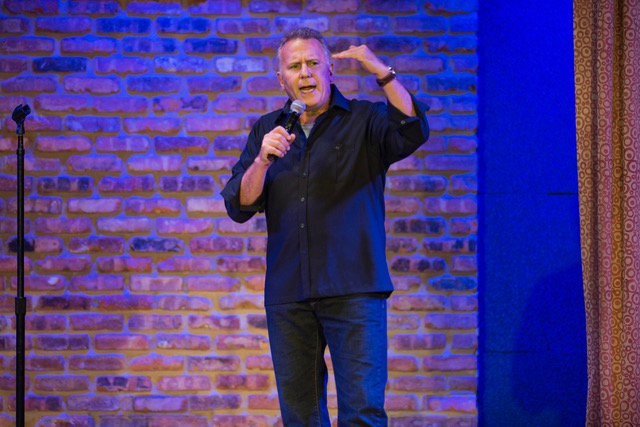 Paul Reiser is the kind of guy you’d love to have as a brother or a friend. He’s straight-forward, funny and kind from the moment you pick up the phone, which I found when he called me from his home last week. Reiser performs at The Pabst Theater on Saturday, July 27th.

Reiser was first a standup comic, then a movie and television actor and now it’s back to some stand-up after a considerable hiatus. Reiser says he took a long time off from standup when he was developing “Mad About You,” a long-time hit for NBC running from 1992-1999. The show starred Reiser and Helen Hunt as a married couple in New York City, and won numerous awards including four Golden Globes and 12 Primetime Emmy Awards.

“It’s interesting,” Reiser says, “After I was away from standup for a while I was surprised how much I loved it. There’s such a great connection when an audience comes to see me. Many have read my books and it’s like meeting with old friends.” Reiser also says it’s difficult to get television shows and movies made. By contrast, with standup, it’s uncomplicated. “I show up, tell some funny stories, and have a good time. Nobody can mess with that.”

He had done some comedy and then landed a role in a cinema classic, the powerful and poignant coming-of-age film, Diner, directed by Barry Levinson in 1982. The film revolves around a group of college-age buddies struggling with their imminent passage into adulthood in 1959 Baltimore.

For many, Diner would have been a career. As the sweet and car-challenged Modell, he quietly works his way into the viewer’s heart. It was ahead of its time. “It was character and ambience driven,” Reiser says. He says when producers saw the first cut of the film they complained it was guys arguing about a roast beef sandwich. To which Levinson replied since there was no real plot to the story, it was as good as arguing about anything else.

Reiser says the way he got the role could be part of a stand-up routine. “I came with a friend who was auditioning. I wasn’t even an actor, technically speaking. I started talking to Ellen Barkin, who played Beth in the film. Apparently she told Barry Levinson that he had to meet me. I happened to walk in with a buddy. They actually came to New York to look at comics, and, even then, I wasn’t included in the group. But, for some reason, they flagged me.”

As much as the film is about a guy’s coming of age, Reiser says it appeals to women as well. “When I look back I realize how wildly fortunate I was — an accident. I basically stumbled into the wrong room. I was so impressed with the cameras, trucks, I had no idea what I was doing.”

Reiser had a role in a recent well-reviewed production on FX, entitled Fosse/Verdon. This limited series focused on the relationship between the actress Gwen Verdon and choreographer and later film director, Bob Fosse. The series starred Michelle Williams and Sam Rockwell, arguably the hottest actor in Hollywood. Reiser played Cy Fuerer, the producer for a Fosse-directed film, Cabaret.

“My son isn’t impressed with meeting any actor,” Reiser says. “On the set of Fosse/Verdon, he was coming down to see me. I told Sam my son was a big fan but he’d never let on. He’s too cool. Turns out, the first thing my son tells Sam is that he loved him in the movie Moon.

They struck it off and had a great time. He couldn’t have been nicer.” Reiser says he thought Rockwell might be a very serious actor on the set and not communicate. It turns out he was just the opposite.

Reiser says the first time he noticed Rockwell was in The Green Mile. “He had so much energy, I thought ‘who is this guy?’ In Fosse/Verdon he was so subdued. An amazing actor.”

In 2017, Reiser created and produced, There’s Johnny. “It focused on a young kid from Nebraska who wound up working on the Tonight Show With Johnny Carson.”

The project, Reiser says, like so many in Hollywood, took forever to get on its feet. “My partner had been working on that project for 15 years. Mostly we needed cooperation of Carson Company. Hulu launched a new platform called Seeso, which didn’t last. “We were sort of their underfed foster child,” Reiser says. “I was proud of what it was. At the core of the show was the love and admiration for Carson. It was touching and funny with some really funny bits.”

There’s Johnny ended after just one season, but like Reiser’s other work, it was highly rated. “I don’t know if it was too smart,” Reiser says. “There was so much going on in the 70s with Vietnam, sex, drugs, Nixon. Tony Danza was great on that show.” Danza played Tonight Show producer, Freddy De Cordova.

Reworking and rehearsing his comedy act has taken a lot of work and time for Reiser. “I haven’t seen a lot of comics, I haven’t sought them out,” he says. “I have gone out to a local club on occasion and seen some amazing young performers.” He’d just show up and not really know the comedians that were on the rise. “There were comics I hadn’t seen in their formative years such as Kevin Hart. I used to be in the trenches with Jerry Seinfeld and Robin Williams.” For his own comedy, Reiser likes to zero in on what life is about, taking most of his act from his life. “I just tell you what happened. There’s a lot of married guy stuff, about being in my sixties, kids, marriage, struggles with updating your phone. The core of my audience is going through what I’m going through.”

Especially the part about updating your phone.