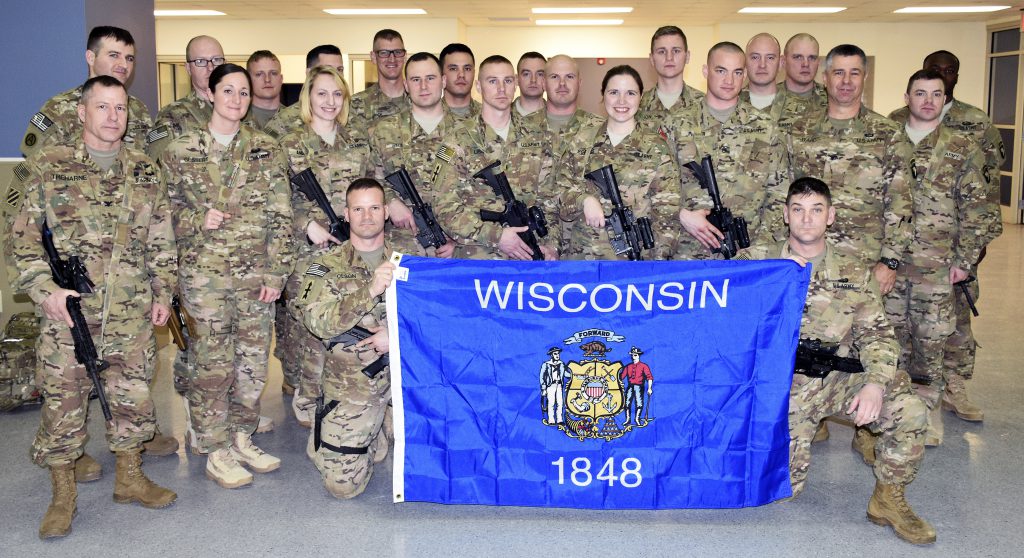 Last month five state officials went to Fort Gordon, the Georgia military base that is home for about 12,000 active-duty soldiers, armed with Gardetto’s snacks and this elevator-speech message:

“Your work ethic, loyalty and sense of mission are not things you just turn in with your uniform on separation day. These skills, and the character you developed in the military, can be put to good use in Wisconsin.

“We offer more federally recognized programs for veterans than any other state as well as an exceptionally high quality of life – including educational and career opportunities specifically geared toward honoring the sacrifices veterans have made on behalf of our country.”

The delegation returned from Fort Gordon with information on 68 individuals – 46 active-duty soldiers, 10 military spouses and 12 veterans. Those 68 will receive a follow-up email encouraging them to send a resume, consider Wisconsin “for personal, professional and business success” and be asked to visit InWisconsin.com/veterans.

When soldiers and their spouses go that Website (“Deployed to Employed: Find Your Career in Wisconsin”), they can compare veterans benefits in Wisconsin and other states, are invited to provide information on their specialized military training and career interests, and learn about potential employers.

The Fort Gordon visit is part of Wisconsin’s aggressive Hiring Our Heroes (HOH) campaign that provides information to soldiers about to be discharged and their spouses. Former Gov. Scott Walker began HOH, which continues under Gov. Tony Evers.

HOH is one of several programs aimed at fighting the state’s current and projected future shortage of workers. Other programs invite Midwest Millennials and UW System graduates to relocate here. The state also can create economic “enterprise zones” for military spouses.

State agencies that work on HOH include the Wisconsin Economic Development Corporation (WEDC) and the state’s Workforce Development and Military Affairs departments.

There were strategic reasons to go to Fort Gordon, said Rebecca Deschane, talent initiatives director for the WEDC and the UW System.  Fort Gordon is home to the “U.S. Army Cyber Center of Excellence,” explained Deschane, one of those who visited the base.

“Few outside the state are aware of the broad-ranging tech industry in Wisconsin,” she said. “They are genuinely surprised to learn tech jobs are abundant in a state historically known for agriculture and manufacturing. Entrepreneurial-minded attendees are amazed to hear that six top startup ecosystems in the Midwest are in Wisconsin.”

Before a HOH team visits a military base, a “geo-targeted digital ad” campaign promotes Wisconsin in publications for soldiers and their spouses and on social media. And, three blog posts per month include “perspectives from veterans here in Wisconsin who are taking full advantage of what our state has to offer from a career and lifestyle standpoint,” Deschane said.

There are also “Wisconsin Night” promotions on military bases with Wisconsin cheese, Kringle, brats and maybe even a fish fry. Gardetto’s snacks were handed out at Fort Gordon.

“The Wisconsin Army National Guard remains committed to the success of the Hiring our Heroes program,” said National Guard Major Matthew Kuhnert, who worked on its development.

After hearing the Wisconsin pitch, a soldier or military spouse who knew little about the state is usually impressed at the outreach, Deschane said. And, soldiers from Wisconsin stationed at bases visited become great ambassadors, she added. “They are extremely proud of their state for leading the way in connecting in this manner.”

Hiring Our Heroes events so far have resulted in 971 leads, including 775 active-duty soldiers, 80 military spouses and 91 veterans.

Why does Wisconsin have to visit military bases, run mass-transit ads that target Midwest Millennials and ask UW System alumni to consider coming back home?

Besides record low unemployment, “Wisconsin has too few young people to replace retiring Baby Boomers over the next 15 years, so the state must turn to migration to grow its workforce,” said Dale Knapp, director of Forward Analytics, the research arm of the Wisconsin Counties Association. “During 2010-2015, the state lost population among key workforce groups, with the most troubling being the net outmigration of young families, a group that Wisconsin typically attracted.”

What base will Hiring Our Heroes visit next? Marine Corps Base Camp Lejeune in North Carolina, home to 47,000 Marines and sailors, in October.