Budget gives credit to homeowners, and 72% of state’s whites, 27% of blacks own homes.

By Tamarine Cornelius, Wisconsin Budget Project - Jun 28th, 2019 10:52 am
Get a daily rundown of the top stories on Urban Milwaukee

Most people of color would be blocked from receiving an expanded property tax cut approved by the legislature, with the value of the credit being delivered overwhelmingly to white residents of the state. The property tax cut included in the budget sent to Governor Tony Evers will make Wisconsin’s tax system – already stacked against people of color –  even more skewed in favor of white residents, widening the racial wealth gap.

The legislature voted to pump an additional $32 million this year and $33 million next year into a property tax credit that is usually funded only from proceeds from the state’s lottery. The tax credit will go only to residents who own their homes and live in them. Even though renters pay property taxes through their rent, they will not be eligible to receive the expanded credit.

The eligibility requirements for this property tax credit act to deliver an outsized share of its value to white residents, who are more likely to own a home. Historic policies set up roadblocks to homeownership for residents of color. Racially-restrictive housing agreements long prohibited residents of color from living in certain areas of the Milwaukee suburbs and other parts of Wisconsin, limiting the areas in which residents of color could live and work. Federal lending practices specifically discouraged banks from issuing mortgages in neighborhoods with a high percentage of residents of color, starving those areas of investment and making it harder for residents of color to live in their own home regardless of their own individual credit worthiness.

The results of these discriminatory actions can be seen in the different rates of homeownership by race in Wisconsin. White residents of the state are nearly three times as likely to own their own home – and are therefore three times more likely to be eligible to claim the expanded property tax credit – as African-American residents. And while a large majority of white residents (72 percent) own their own homes and can claim the lottery tax credit, that is true of less than half of African-American (27 percent), Latinx (40 percent), Asian (47 percent) or Native-American (48 percent) residents. 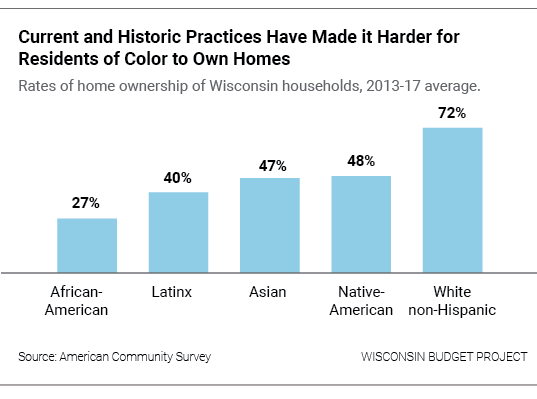 Making sure property tax credits are distributed equitably is especially important given that many households of color – especially African-American and Latinx households – face high housing burdens. Decisions made by lawmakers and private businesses that devalue work in industry sectors in which workers of color hold large number of jobs have suppressed wages, making it more likely that residents of color will pay more than 30 percent of their income in housing costs. More than half of African-American children and a third of Latinx children in Wisconsin live in households that pay more than 30 percent of their household income for housing costs, as the graph below shows. 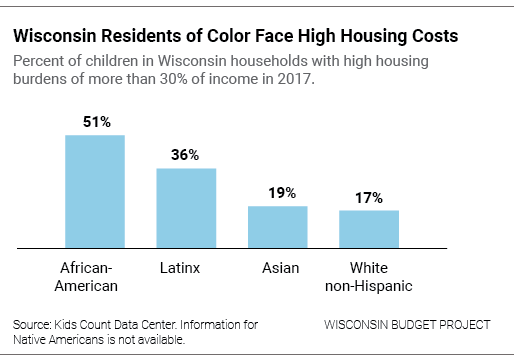 A less discriminatory way for the legislature to reduce property taxes would be to take those same resources and instead boost the state’s Homestead Credit, which delivers a targeted property tax cut to owners and renters with low incomes. Governor Evers included an expansion of the Homestead Credit in his budget proposal, but state legislators took out that provision in favor of their own version of a property tax cut that favors white residents over residents of color. (Read more about the Homestead Credit and other changes that would create a more equitable tax code in Wisconsin and ensure that everyone has full access to opportunity.)

State tax policies can be a powerful tool for expanding opportunity and enhancing racial equity, but right now, Wisconsin’s tax system delivers major tax breaks to white residents while depriving residents of color of similar opportunities. By expanding a property tax break that cuts taxes only for homeowners, the legislature is reinforcing the discriminatory nature of our current tax system.