Some outstate counties have far more marijuana charges and felony charges per resident.

By Gretchen Schuldt, Wisconsin Justice Initiative - Jun 17th, 2019 01:58 pm
Get a daily rundown of the top stories on Urban Milwaukee 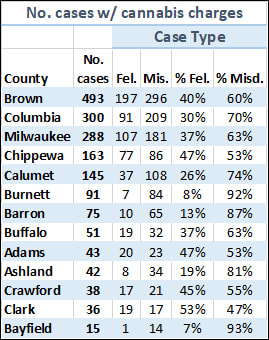 No. cases with cannabis charges

We are through 13 of 72 counties in our review of marijuana charges filed in Wisconsin last year, but it is already clear that marijuana laws are unevenly enforced throughout the state. The data is being studied as part of a project by the Wisconsin Justice Initiative and the American Constitution Society Milwaukee Lawyer Chapter. 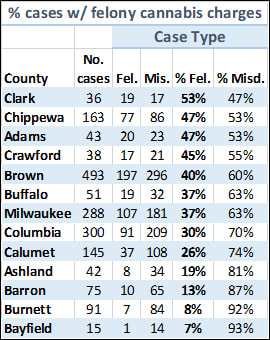 These aren’t the only disparities that this investigation is finding. Follow along as this project documents the wildly erratic enforcement of cannabis laws in Wisconsin.

Additional data for each county is posted on The 2019 Pot Page and we’ll be updating and expanding our charts in future stories.