By Shawn Johnson, Wisconsin Public Radio - Jun 14th, 2019 01:18 pm
Get a daily rundown of the top stories on Urban Milwaukee 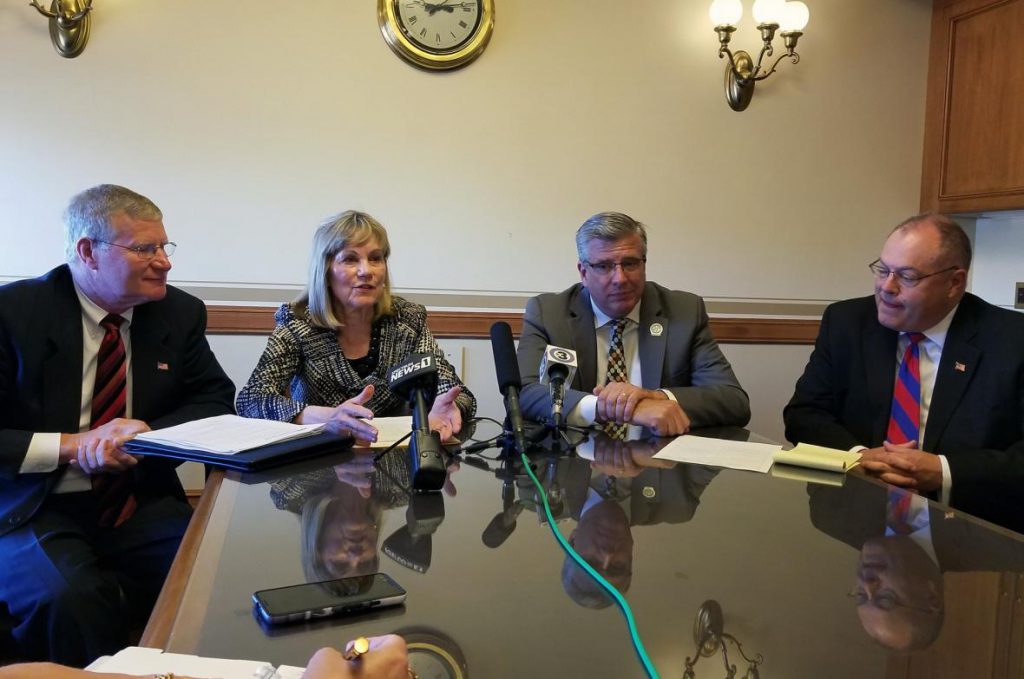 Republicans on the Legislature’s Joint Finance Committee voted along party lines Thursday to pass a two-year state budget that rejected many of Gov. Tony Evers‘ top priorities, saying their plan lives within the state’s means while increasing funds for schools and roads.

Republicans also voted Thursday for plans that would cut taxes on the average taxpayer by about $75 in the 2019 tax year and $136 in 2020, which would amount to a $457.6 million income tax cut overall.

The GOP plan is substantially smaller than Evers’ $833.6 million income tax cut, which the Legislative Fiscal Bureau estimated would have cut taxes for the average taxpayer by about $216 per year.

But Evers would have increased taxes on manufacturers and capital gains for the wealthiest residents to offset his plan, a move Republicans have said repeatedly they won’t support.

“We can do the tax cut without losing our priorities,” said Sen. Alberta Darling, R-River Hills. “I think that’s really important.”

The combined effect of all the GOP income tax changes would be aimed most directly at the lowest two income tax brackets.

The GOP plan would also use the Lottery Tax Credit to reduce property taxes by about $59 million.

But Democrats said Republicans were protecting Wisconsin’s “privileged elite” by blocking other parts of Evers’ budget.

“(Evers’) priority is fair taxation. His priority is targeting tax relief to the low- and middle-income people who need it the most,” said Rep. Chris Taylor, D-Madison.

Republicans did vote to increase taxes on e-cigarettes by $0.05 per milliliter of liquid, a tax increase that is $5.5 million larger than current law but $29.2 million smaller than Evers wanted.

The tax cut plan passed the JFC on a 12-4 vote. It still needs to pass the Assembly and the Senate before it heads to the governor’s desk.

Speaking shortly after the vote, Sen. Majority Leader Scott Fitzgerald, R-Juneau, said Senate Republicans would meet to discuss the budget Tuesday. Some GOP senators, like Sen. Steve Nass, R-Whitewater, have said they’re unhappy with how much the bill would borrow and spend, not to mention increased fees on vehicle titles and registration.

But Fitzgerald said that he personally supported the plan.

“I’m here to tell you this is a good budget,” Fitzgerald said.

Republicans said the Assembly would vote on the budget Tuesday, June 25, and the Senate could pass it later that week.

Evers has not ruled out vetoing the entire budget, something that hasn’t happened in Wisconsin since the state moved to an executive budget in 1931.

Assembly Speaker Robin Vos, R-Rochester, said that made it unlikely that Evers would veto the budget this year, especially when it increases revenue for transportation and boosts funding for schools by $500 million, two top priorities of the governor’s.

“I am not accepting the fact that Tony Evers is going to veto this budget,” Vos said.

But Vos himself said earlier this week that if Evers were to veto the entire proposal, Republicans would not try to override him until October, raising the prospect of a three- to four-month delay for a spending plan that’s supposed to take effect July 1.

While the GOP budget would boost spending on a variety of government programs, many of the increases would be smaller than what Evers wanted. For example, Evers wanted to spend an additional $900 million on schools, and under his Medicaid expansion plan, an estimated 82,000 people would have qualified for Wisconsin’s BadgerCare program.