Old law makes it a felony for doctors to perform abortions, could apply if Roe decision overruled.

By Shawn Johnson, Wisconsin Public Radio - Jun 5th, 2019 12:35 pm
Get a daily rundown of the top stories on Urban Milwaukee 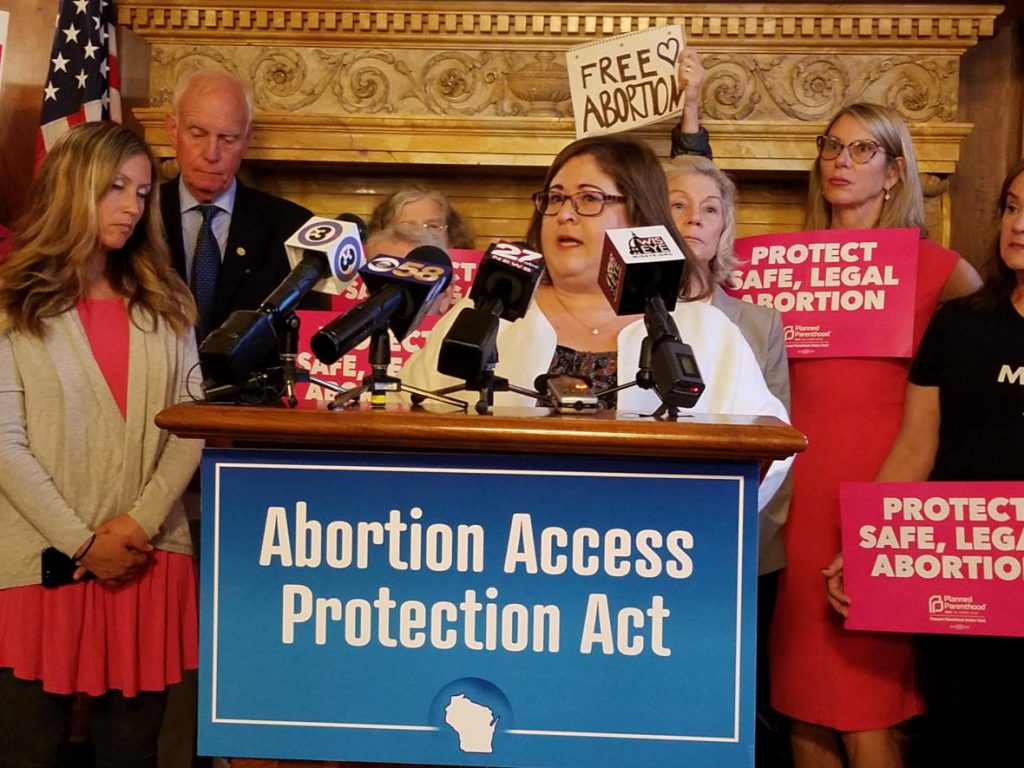 Abortion rights advocates are pushing for a full repeal of Wisconsin’s long-dormant criminal abortion statute, saying the law could be revived if the U.S. Supreme Court repeals Roe v. Wade.

Their push comes a day before Republicans who run the Wisconsin Senate are set to pass a package of four bills that would restrict abortions in the state.

The law Democrats want to repeal makes it a felony for doctors to perform an abortion and defines an “unborn child” as “a human being from the time of conception until born alive.” It hasn’t been enforced since 1973, when the U.S. Supreme Court’s Roe v. Wade decision legalized abortion nationwide.

Under the proposal by Rep. Lisa Subeck, D-Madison, the abortion ban would be removed from Wisconsin’s statutes entirely.

“I believe that there are a lot of people in this state who don’t even know that if Roe were overturned, abortion would be immediately illegal,” Subeck said at a state Capitol news conference. “I have conversations all the time with folks who say we’d be OK here in Wisconsin, and we wouldn’t.”

Subeck was joined by several Democratic lawmakers as well as organizations that support abortion rights, like the Wisconsin Alliance for Women’s Health. The group’s director, Sara Finger, said President Donald Trump‘s nominees to the U.S. Supreme Court had put the court in a position where it could, “pave the way to outlaw abortion altogether.”

“The threat to Roe v. Wade is very, very real,” Finger said. “And thus, the threat to Wisconsin women’s access to abortion here is on the line.”

Subeck’s proposal has little chance of passing the Legislature, where both the Senate and Assembly are controlled by large GOP majorities.

Asked to comment on Subeck’s bill, Senate Majority Leader Scott Fitzgerald, R-Juneau, indicated that the Senate was focused on bills that restrict abortions.

“Overturning Roe v. Wade would be a monumental moment for the pro-life movement in Wisconsin that I’m proud to be part of,” Fitzgerald said in a written statement. “Unfortunately abortion in our state is still happening, so tomorrow the Senate will take up common-sense legislation to outlaw abortions that discriminate based on race, sex, or ability. I’m hopeful that Democrats will support these reforms, but I won’t hold my breath.”

The four bills scheduled for a vote in the Senate Wednesday already passed the Assembly on near party-line votes.

One would require doctors to give care to any fetus born alive after an unsuccessful abortion. Referred to as the “born alive bill,” it’s been promoted by Republicans nationwide, including by the president.

Another bill would require doctors to tell women that they can change their mind when undergoing a chemical abortion.

A third would pull all government funding from Planned Parenthood, a move that would require a federal waiver.

And a fourth would ban doctors from performing abortions based on race, sex or congenital defect.

Gov. Tony Evers has said he will veto the four GOP bills. A spokeswoman for Evers did not immediately respond to a request for comment on Subeck’s proposal.