Man of Many Woods 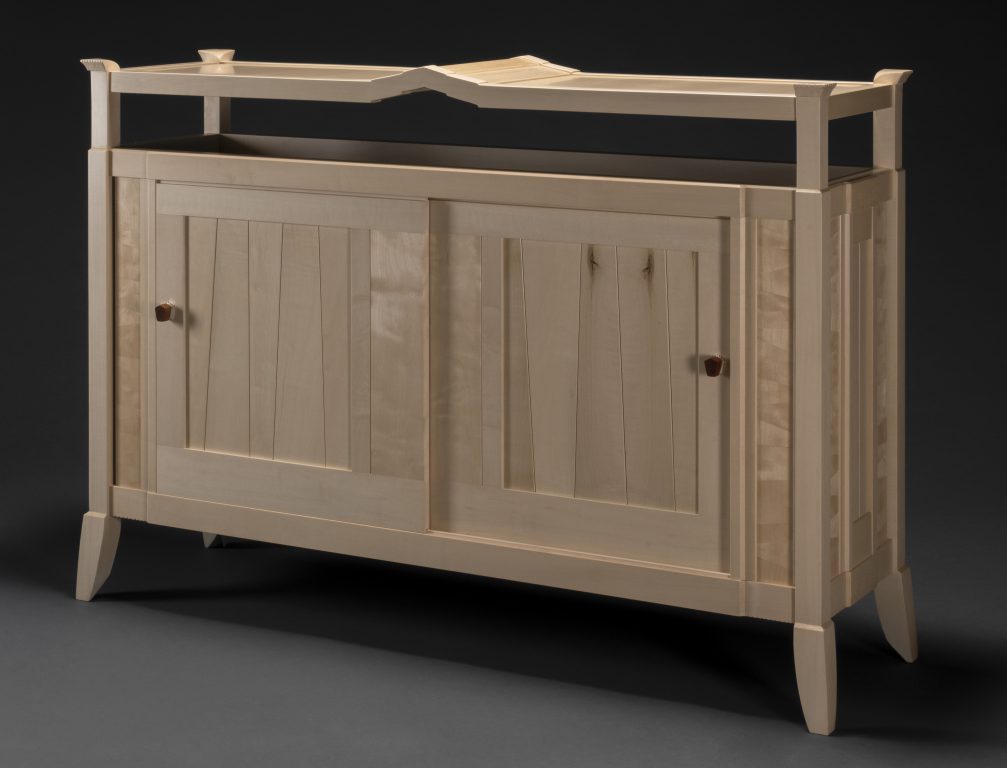 Through August 25, the Milwaukee Art Museum (MAM) will display “Contained,” an exhibition showcasing Radtke’s work, which includes cabinets, chairs, desks, and tables, across several decades. Radtke’s work goes beyond the functional. Much like human beings, the artist’s pieces contain many hidden treasures and surprises: pops of color, secret compartments and designs in unlikely places, such as furniture legs and backs of cabinets.

Radtke incorporates a number of woodworking techniques in his furniture designs, including bookmatching (pairing two or more types of wood in order to achieve a mirrored appearance). The artist has spent years perfecting bookmatching, as evidenced in a variety of his works, among them the stunning “Two-Faced Wall Cabinet” (2006-2007) and the large, sophisticated “Library Table” (2008). Although Radtke appears partial to rarer woods like ebony and pink ivory, he finds beauty in common, even “nuisance,” woods. Holly seems to be a favorite; Radtke uses it in his small cocktail table “Two-Drink Maximum,” (2004) accented with red paint. And his 1999 work, “Scroll Cabinet”, highlights tree of heaven (Ailanthus altissima), a light-colored wood considered to be somewhat of an invasive species.

“It’s a really lovely wood. I laugh that it is considered a ‘reject wood,’” Radtke is quoted as saying on the exhibition’s description of “Scroll Cabinet”.

At times, Radtke treats his work as a painter would a canvas. He employs a technique he created called “fractured veneer,” in which he cuts wood scraps into geometric shapes and arranges them on furniture surfaces in an eye-catching manner. This technique is illustrated in pieces like “Collector’s Vault,” which features a fractured veneer panel on the front, and in the works “Spirits Cabinet” (2015, and “Crumbling the Antiseptic Beauty” (2018), both sporting sleek cabinets with light-colored wooden door panels and asymmetrical designs.

“The fractured veneer detail opened up the idea to me that I was now basically painting pigment onto wood in some way. I had some control of the grain movement, while also adding a little visual chaos,” Radtke is quoted as saying.

For nearly 25 years, Radtke has collaborated with metalsmith Sarah Perkins on works like “Silver Leaf #1” (2000) and “Copper Leaf” (2008). In these, Radtke’s precise and elegant cabinet forms pair perfectly with Perkins’ naturalistic enameled leaves.

Radke draws on many sources of inspiration, including nature, music and  Egyptian history and mythology. The artist’s stately “Sarcophagus” series, six cabinets built since 1999, evokes elaborate tombs of ancient civilizations. For example, the rich red interior of “Sarcophagus #6” (2018) suggests royalty. According to Andera, two circles and lines on the cabinet’s right-side door, which appear to be imperfections in the wood, actually represents the Eye of Horus, an Egyptian symbol of protection and good health.

A rock and jazz aficionado with an impressive collection of vinyl records, Radtke pays homage to artists like David Bowie and the post-punk band,  The Durutti Column, with music-themed pieces such as 1995’s long and lean “Music Cabinet,” with two rows of Perkins’ enameled copper panels.

A portion of the exhibit is dedicated to Radtke’s conceptual pieces, among them “The Twins,” an impeccably-matched pair of cabinets, one ebony, one holly, with silver gilding on the doors, and 2019’s “PRIVILEGED (The Colour of Spring),” a holly vanity table and chair with a small standing triangular mirror in two parts. The light-colored piece could possibly represent the nature of financial—and white—privilege. Whatever you make of it, it’s an arresting work. 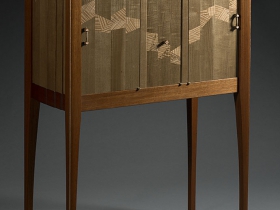 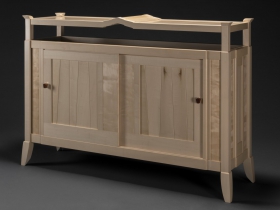 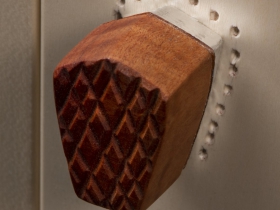 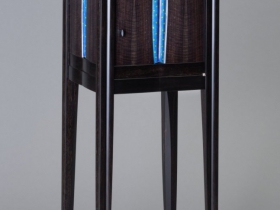