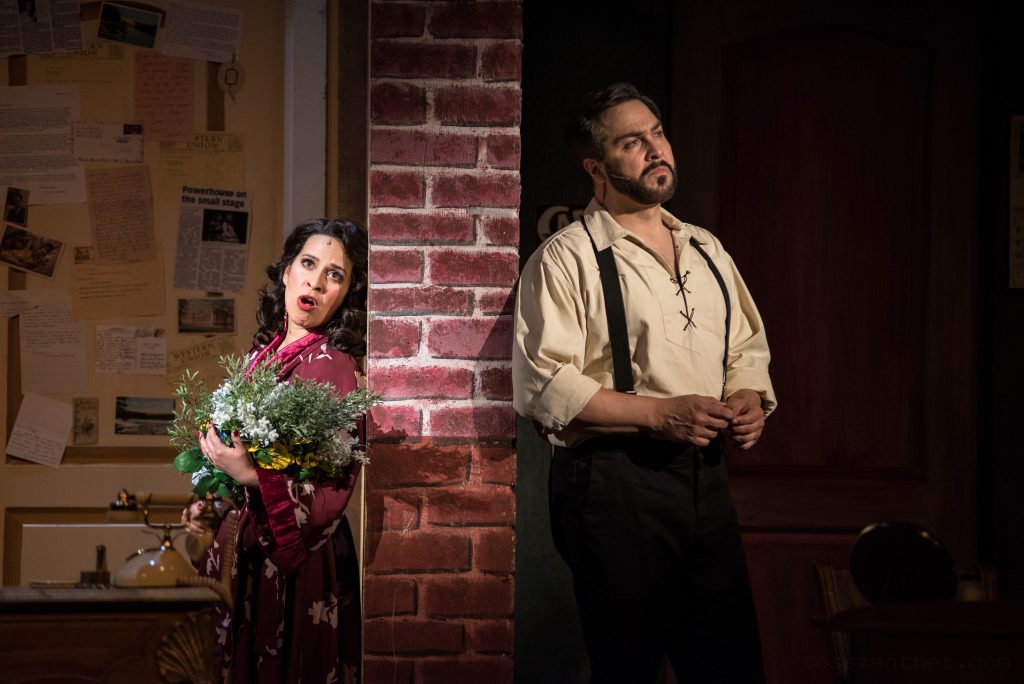 As long as Shakespeare remains essential to theater, so, too, will Cole Porter’s best and wittiest book musical, Kiss Me, Kate, which comes with rhymes at the bard’s expense and mighty tunes that retain zing and theatrical power 70 years after it won the first Tony for a musical comedy.

It’s tongue-in-cheek with a higher message, as is often the case with Porter. The vulgarism of his word plays cavorts with the intellectual appeal of his wit.

Kiss Me, Kate could be a happy marriage of broad, physical comedy, intertwined with marital woes, impish lyrics and romantic ballads — but in ways that require care in the blending.

This local Skylight production sometimes lacks the perfect pairing of melodious ingredients. But it has been extended through June 16 because the lead actors and the music are clearly worth it.

There may not be as many show-stoppers as the production could provide. Notably disappointing were, “Another Opening Another Show” and “Too Darn Hot.”

But don’t be greedy. I counted eight other numbers that genuinely pleased without wearing out their welcome.

But wearing songs out is a problem in this show, as if the cast were told to keep goofing around in case the audience doesn’t fall for the genuine ending. The audience is way ahead of the goofers.

A current revival with light feminist updates is wowing Broadway, but the Skylight version is pointedly different. It plays for full slap and spank in the battle of the sexes. The backstage plot surrounding a musical version of Taming of the Shrew relies on corny coincidences that can be managed for genuine heartache if the director cared.

Ray Jivoff, an admired theater man leaving the Skylight as artistic director with this last outing as a director, is well aware of the feminist winds that affect staging this musical comedy masterpiece of shrewish rage and chauvinistic response. But he believes that Shakespeare and Porter deserve full weight, as if the newly aware audience will bring the right balance of response.

I would agree if there also was finesse in blending the human chords, the backstage interplay and the clowning. The possibilities are there. but the coordination is not a major concern, except for the two main leads — Rana Roman and Andrew Varela — who are a first-class show in themselves.

Jivoff’s main changes are in double- and triple-casting, which only works in certain situations. One example is adding bits from sock puppets to a dying bird to emphasize the roots in comic burlesque. The leads, it should be noted, make the bits work.

The effort to frame the big moments with extended antics, while simultaneously covering scene changes, is overdone.

So, too, is the dancing, whose highpoints come down to the tapping skills of Joe Capstick, who leaps railings mightily in the second act, and the angular limberness of Sean Anthony Jackson. Generally, Amy Brinkman’s choreography is too brutally Broadway secondhand and needs refreshing.

Having noted there are letdowns and stallings within the show and some chugging overwork of the ensemble, let me add there are delights of enormous size, mainly stemming from Kate and Petruchio, a.k.a. feuding actors Lilli Vanessi and Fred Graham. The diminutive Roman commands gigantic attention. She and Jivoff have made a raucous bawdy highlight out of “I Hate Men.”

Varela provides another highlight, pulling out Petruchio’s little black book for “Where Is the Life That Late I Led.” Both numbers work through acting skill but also serve as a perfect enunciation and salesmanship for the tricky Porter lyrics.

The leads are also enchanting in “Wunderbar” and trading solo musings in “So in Love.” Here, we grasp not just the quality of the voices, but the ability to act within a song. Varela has greater emotional range than suggested by the understanding grin he is forced to freeze on too many occasions.

By sheer vamping assault, a big-miked voice and leggy presentation, Kaylee Annable seduces the audience in such numbers as “Always True to You in My Fashion,” though, here, Porter lyrics could stand for more clarity. Nonetheless, the audience bounces for her in this number, in addition to “Why Can’t You Behave?” and “Tom, Dick or Harry.”

These moments are fun, but they miss those sly little suggestions from Porter and playwrights Sam and Bella Spewack about where to insert self-awareness of the silliness and pull the plot back to the humanity side.

Jonathan Gillard Daly, a usually good actor, falls back on familiar vocal tricks for too many multiple roles, but does get one of the show’s most famous songs, “From This Moment On.”

The plot turns loose two gangsters — usually men, but here man and woman — perhaps to play off Kelly Doherty’s big size, big deadpan and big voice. The casting and extreme costuming for her and Doug Jarecki made it hard for them to serve any purpose beyond the delightful tongue-twister Porter has given them, “Brush Up Your Shakespeare,” which includes encores built into the antics.

There is so much good music and lyrics that survive this constant sense that the cast is spoofing and reducing the purpose of this musical too hard. What stopped the show from falling out of professional worth were Roman and Varela, who are first-rate.

The eight-piece band in the pit under Kurt Cowling would need to become a full symphony to cover the excesses, maypole dancing and other useless fills with enormous musical flourishes. But when focused on backing the singers, the band does very well indeed. 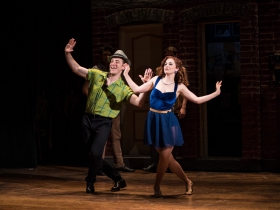 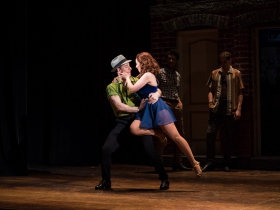 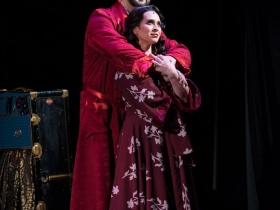 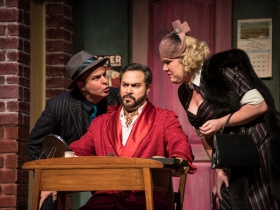 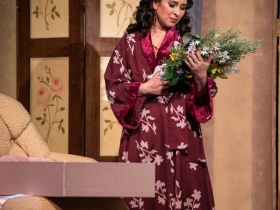 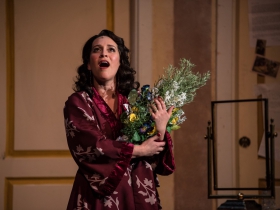