The Race to Curb Speeding in Milwaukee

By Edgar Mendez, Milwaukee Neighborhood News Service - May 17th, 2019 11:11 am
Get a daily rundown of the top stories on Urban Milwaukee 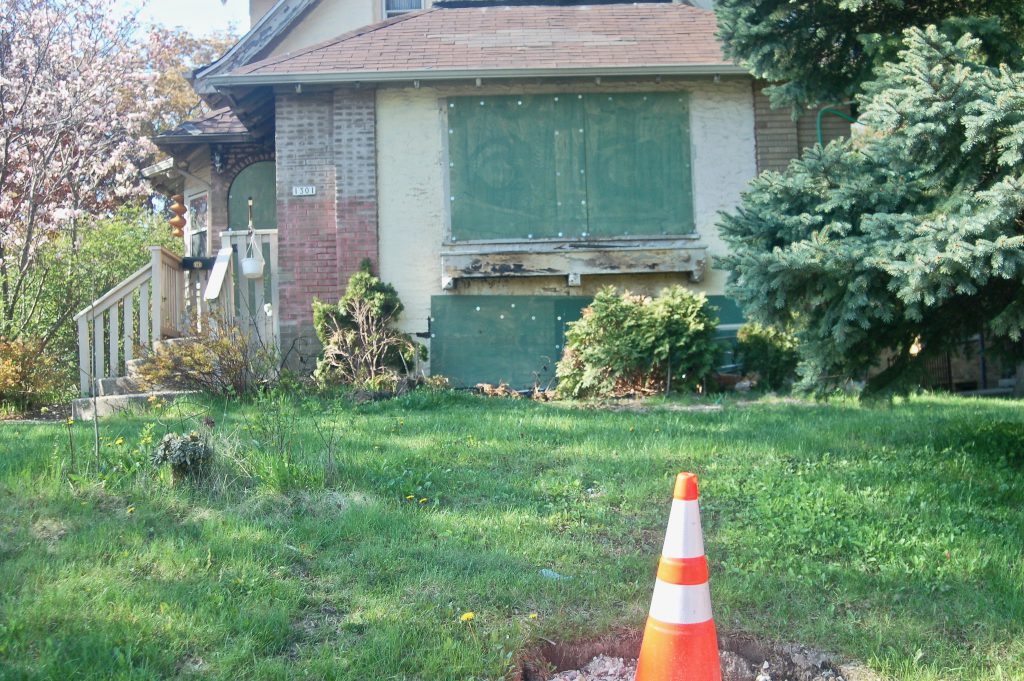 This home on the corner of North 13th Street and West Capitol Drive in now vacant after a vehicle being chased by Milwaukee police crashed into it, starting a fire. The driver of the fleeing vehicle died in the crash. Photo by Edgar Mendez/NNS.

If you were on social media over the weekend, you probably saw the video.

A stolen Ford Escape tumbling end-over-end on North 45th and West Center Street after rear-ending a taxi and striking a pole — with police in hot pursuit.

The incident was just one in a string of headline-grabbing police chases that ended violently this spring — three of them fatal, with one involving a Milwaukee County sheriff.

Many of the crashes, including the one on Center, had unintended victims, whether it was through injury or having their property damaged. And as the chaotic scenes play out across the city, some residents fear becoming victims of high-speed chases and wonder whether they are the best way to stem crime.

“Pursuits do more harm than good, and innocent people are getting hurt,” said Arnold Peabody, a Milwaukee resident who wants the chases to stop.

Others worry about the impact it would have if police stopped the pursuits.

“You don’t want innocent people in harm’s way, but at the same time if people know you can’t pursue them, then it could turn into the Wild Wild West real quick,” said Seth LaPalm, who lives on Milwaukee’s South Side.

The Milwaukee Police Department reiterated this week that it will not be making changes to its pursuit policy, citing nine weekend pursuits that resulted in 11 arrests and netted illegal drugs and three guns.

“The Milwaukee Police Department is committed to reducing reckless driving and making the city a safe place to live, work and raise a family,” a statement released by the MPD said.

Gretchen Schuldt, executive director of the Wisconsin Justice Initiative, said there is no proof that the department’s pursuit policy is increasing safety.

“The Milwaukee Police Department needs to make sure it is doing everything it can to ensure the safety of officers and civilians, including innocent third parties, who might be injured in police chases. So far we don’t have evidence of that,” Schuldt wrote in an email to NNS.

Chases on the rise

Aside from the high-profile nature of recent police pursuits, chases in general have been increasing in Milwaukee, according to a report released in April by the Fire and Police Commission. The report showed that police chases increased from 369 to 940 from 2017 to 2018, with more than one-fourth of those chases resulting in accidents.

The increased numbers coincide with a 2015 stiffening of the pursuit policy that allowed pursuits to occur in incidents involving reckless driving or drug dealing. Sixty-seven percent of police chases last year began because of reckless driving,  according to the 2018 City of Milwaukee Fire and Police Commission Vehicle Pursuit Report.

The number of vehicle pursuits had dipped to just 50 in 2012, two years after MPD limited its pursuit policy to incidents that only involved a violent felony after several police chase deaths occurred. The change in policy resulted in an atmosphere where criminals assumed that police wouldn’t give chase, some observers said.

Ald. Bob Donovan, who supported stiffening the chase policy in 2015, remains steadfast that the solution is not to end pursuits. During a recent radio interview with WTMJ, he said people forget how bad things got when police stopped chasing.

“The mobile drug cars, the reckless driving, the running red lights, the speeding,” said Donovan, recalling the atmosphere in Milwaukee during that time period.

Local leaders also are concerned about the pursuits, which are part of the reason why a new youth-led anti-carjacking and reckless driving campaign from the city, in partnership with Ignite Media, Running Rebels and Unite MKE, is being launched next week, said Reggie Moore, executive director of the Office of Violence Prevention.

In addition, the City-County Carjacking and Reckless Driving Task Force is set to meet for the first time on Friday, May 17 at City Hall.

Among the topics likely to be discussed during that meeting and the Fire and Police Commission meeting is whether there are new police pursuit technologies that could help improve safety.

“It’s a no-win situation for the police and the community,” said Phillip Harris, who lives near the home on West Capitol Drive that burst into flames and was heavily damaged last month after a police chase resulted in the death of a man who fled officers.

“No one wants crime and no one wants innocent people to get hurt or to lose their property,” he said.

One thought on “The Race to Curb Speeding in Milwaukee”