By Shamane Mills, Wisconsin Public Radio - May 17th, 2019 11:49 am
Get a daily rundown of the top stories on Urban Milwaukee 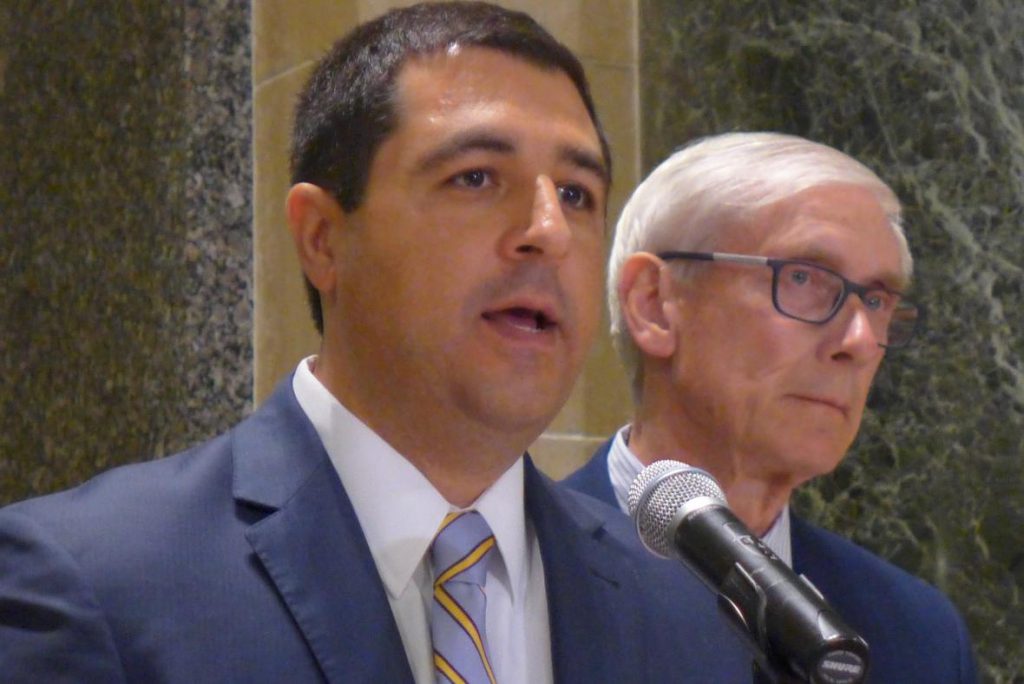 Attorney General Josh Kaul said the opioid epidemic has shattered lives and strained communities across the state. Thursday, May 16, 2019, he announced a lawsuit against the maker of the powerful and addictive opioid OxyContin. Shamane Mills/WPR.

Separate lawsuits are also being filed in Iowa, Kansas, Maryland and West Virginia. Wisconsin and the other states claim Purdue’s advertising strategy downplayed the harm of the popular and powerful opioid and that marketing was approved by the company’s former president Richard Sackler.

“With these five state’s filing suit I hope we are sending a clear message about the seriousness with which AG’s and states around the country are taking these cases,” Kaul said in the state Capitol flanked by Gov. Tony Evers, who said the lawsuit was critically important for families affected by addiction.

“People we’re trying to get justice for were just trying to get the medication and health care they needed without risk of addiction or abuse,” Evers said.

One state has already settled its lawsuit with Purdue. Last month, the company agreed to pay Oklahoma $270 million. It was the first settlement of more than 1,600 lawsuits pending, according to NPR.

Wisconsin wants a permanent injunction to stop what it calls deceptive marketing practices. It’s also seeking compensation for harm to residents, along with civil penalties. In 2015 alone, the opioid crisis was estimated to have cost Wisconsin $10 billion in health care, worker productivity and criminal justice services.

“This must end,” Dane County Sheriff Dave Mahoney said Thursday. “In Dane County alone, we’re responding to between 12 and 15 overdoses a week.”

In 2017 in Wisconsin, 916 people died from opioid overdoses, more than the number of people killed in car crashes.

The civil complaint states in order to overcome doctor resistance to concerns about addiction, Purdue allegedly created a narrative of untreated pain where as many as 100 million people were suffering. The company also paid doctors to speak about the drug, according to the complaint.

In 2007, Purdue was ordered to pay more than $19 million to Wisconsin and 25 other states for violating consumer protections laws with its marketing of OxyContin. Despite that judgment, the complaint said Purdue continued deceptive advertising, although more surreptitiously by relying on front groups to mislead the public and influence opinion.

Purdue spokesman Robert Josephson said in a statement, the company “vigorously denies” the allegations made in the five lawsuits.

“These complaints are part of a continuing effort to try these cases in the court of public opinion rather than the justice system. The states cannot link the conduct alleged to the harm described, and so they have invented stunningly overbroad legal theories, which if adopted by courts, will undermine the bedrock legal principle of causation,” the statement read.

Josephson said Purdue will continue to defend itself against the “misleading attacks.”