Metro area has estimated 20,000 Muslims, for whom Ramadan is a holy season.

By Andrea Waxman, Milwaukee Neighborhood News Service - May 9th, 2019 11:53 am
Get a daily rundown of the top stories on Urban Milwaukee 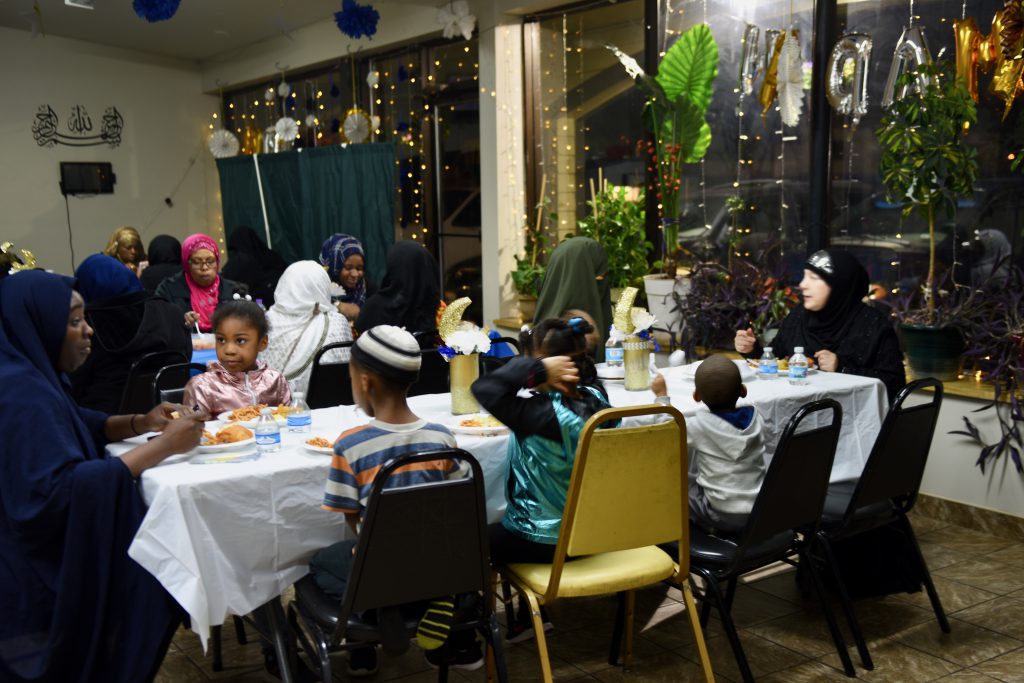 Women and child eat separately from men at the Dawah Center. Photo by Sue Vliet/NNS.

A delicious aroma hung in the air as chicken sizzled on a grill outside the Milwaukee Islamic Dawah Center on Monday night. Focusing on their religious leader Imam Yaseen Domineck’s lecture, rather than the savory smell drifting into the building, was likely a challenge as most of the adults present had been fasting since 4 in the morning.

Self-discipline, a focus on spiritual renewal and awareness that not everyone has enough food lie at the heart of the holy month of Ramadan, which local Muslims began observing Sunday evening, May 6. Officially, it begins with the sighting of the new moon.

The Dawah Center gathering attracted about 60 of Milwaukee’s estimated 20,000 Muslims who will continue fasting from dawn to dusk for 30 days.

During Ramadan, Muslims rise before the break of dawn. Following a small meal and morning prayers, they pursue regular activities, including work and school, while fasting during the day. After the sun sets, families, friends and others gather for iftar, a meal that breaks the daylong fast.

Ramadan, the ninth month of the Islamic calendar, will end in Milwaukee on the evening of Tuesday, June 4.

A three-day celebration called Eid al-Fitr will follow on the first day of the month of Shawwal. One of the largest celebrations takes place at the Milwaukee Convention Center, 400 E. Wisconsin Ave.

Because Muslims are a small percentage of the population in Milwaukee, Ramadan is thought of as unusual, said Janan Najeeb, president of the Milwaukee Muslim Women’s Coalition and a Palestinian American.

Najeeb usually worships at the South Side Islamic Society of Milwaukee, 4707 S. 13th St., which her late father, Mahmoud Othman Atta, co-founded in 1982. In addition, she occasionally visits many of the other nine mosques in the Milwaukee area, she said.

‘The brotherhood of Islam’

Ramadan unites the Muslim world, said William Muhammad, student minister at the Nation of Islam’s Muhammad Mosque #3, 4202 N. Teutonia Ave. “At the end of Ramadan, we join with the Muslim community so that we can experience the brotherhood of Islam even though we may have different expressions of Islam.”

The Quran, the Muslim holy book, is broken into 30 parts. During Ramadan, one part is read every day, he said, noting that it’s not viewed as a history book but rather as active instruction from God.

Saleem El-Amin, raised a Christian, found Islam when his English professor at the University of Minnesota recommended he read “The Autobiography of Malcom X.” He began in the Nation of Islam, but in 2012 he left that movement and with several others founded the W. D. Mohammed Islamic Center, now located at 4200 N. Holton St.

Ramadan is important, El-Amin said, because the Quran was revealed to the Prophet Muhammad during this month.

A community comes together

Like all children at holiday times, Muslim children become excited at Ramadan.

Najeeb said “the idea of sharing of meals, of coming together as a community with friends, neighbors and anyone who is hungry, every night” excites her.

Because many American Muslims have roots in other countries, it’s “incredibly enriching” that they often bring dishes from diverse cultures to share at the break-the-fast meal, Najeeb said.

Zeynab Ali’s parents left Somalia and came to Louisville, Kentucky, by way of a refugee camp in Kenya, where she was born. She moved to Milwaukee in 2008.

Now a college sophomore who lives with her parents and eight younger siblings, Ali too remembers special Ramadan foods from her childhood. Rice and Somali-style samosas, a triangle-shaped dumpling containing ground meat, cilantro, onions and carrots, are some of her favorites.

She recalls a time when “all I had to do was wash my hands and eat,” but after reaching puberty, young people are expected to fast and help with meal preparations, she said.

Many children age 7 and older fast for part of the day to see what the experience is like, Ali said.

“Ramadan for me is like New Year’s. It’s the month where I’m constantly focused on how to better myself as a Muslim and as a person. I feel most at peace during this month,” Ali said.