Race, immigration and other issues explored in Lynden exhibit of Evelyn Patricia Terry. 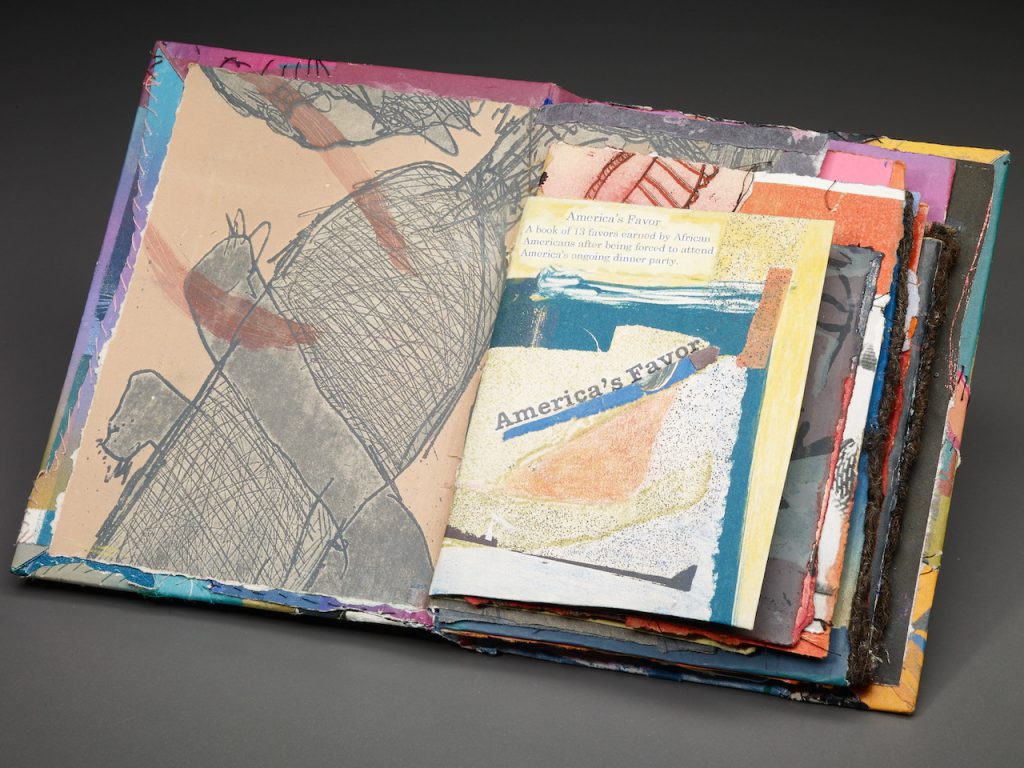 Evelyn Patricia Terry, owner of the Terry McCormick Contemporary Fine and Folk Arts Gallery in Milwaukee’s Lindsay Heights neighborhood, has been an influential member of the city’s arts community for nearly half a century. In her current, socially relevant exhibition, America’s Favor/Guests Who Came to Dinner (And Stayed!) Terry tells the stories of America’s rich immigrant history and envisions a nation unified by cultural understanding, while calling for community activism.

Displayed at the Lynden Sculpture Garden through July 28, America’s Favor features dozens of Terry’s works, many of which are recent, including a glass case of handmade books (some of which contain the artist’s own hair), ink, watercolor and pastel drawings, and a large installation featuring the artist’s extensive collection of folk dolls from around the globe. America’s Favor is part of Call & Response, an ongoing project at Lynden celebrating artists of the African diaspora. 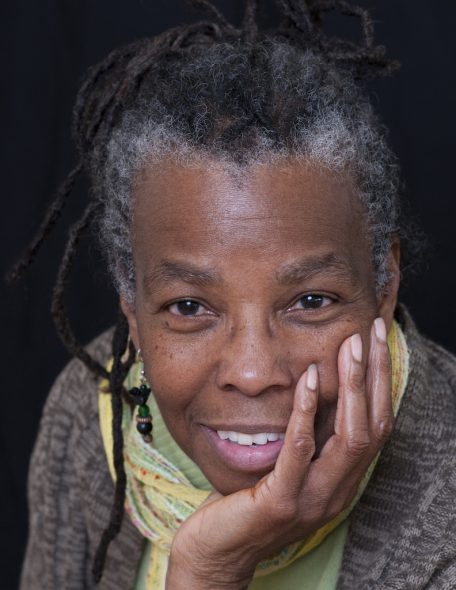 Much of Terry’s works are inspired by her previous pieces and installations. For example, her spectacular table installation is an amalgamation of her 1996 work, Guess/Guests Who Came to Dinner, presented at the former Watts Tea Shop, and Guests Who Came To Dinner (And Stayed), an installation Terry created for Pure Black, a 2004 exhibit at the UW- Milwaukee Union Art Gallery, which she curated with Della Wells.

Everything in America’s Favor carries a message, some on unexpected mediums. In Terry’s mixed media installation, dinner plates containing healthy, raw foods used in varieties of cuisines, such as ginger root, apples, onions, and seaweed, each bear an inscription, like “America, land of opportunity, beckoned, and they came,” “others immigrated tired and desiring a better life” and “groups of people came after being forced to leave homelands/Kidnapped or traded.”

These plates surround cloth and porcelain folk dolls and a large statue, painted reddish-brown and wearing green undershorts, its arm held up in the air, on a pedestal that reads “Statue of Liberty on Bedloe’s Island, New York.” New York’s Statue of Liberty resides on Liberty Island, which was originally named Bedloe’s Island until 1956. Terry’s statue could perhaps represent her message of promoting tolerance and equality for all who live in America, regardless of race, creed, immigration status or sexual orientation.

Terry’s dolls also appear as subjects in her drawings, in which she incorporates ink, watercolor, pastel, glitter and sewing thread.

The artist narrates her desire for a harmonious past, present and future in a nation divided by racial and gender differences, while acknowledging present realities. Her subjects highlight strong, successful women (“In America, She Calmly Joined the ‘Me Too’ Movement;” “Girls Soar, in America, To Make the World Soar,” 2019). Couples fall in love, and sometimes marry, often despite obstacles (“In America We Met in the Beer Line Café,” “In America Love Sometimes Happens and We Eloped,” “In America, Our Families Disapproved, Also Back Home.”)

Terry’s Play the Race Card series within the America’s Favor exhibition highlights nine pieces created between 2006-2007. For these, the artist incorporates recycled red, white and blue and red, green and black canvas strips from her former paintings, set against multi-colored backgrounds. “Focusing on two politically and emotionally-charged color groupings on a backdrop of other colors, this work promotes race conversations as commonplace topics like the weather—absent the political biases, empowerment drain, and emotional damage harbored,” reads the exhibition description at www.lyndensculpturegarden.org.

America’s Favor/Guests Who Came to Dinner (And Stayed!) 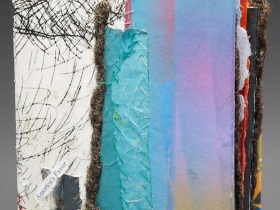 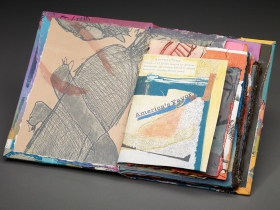 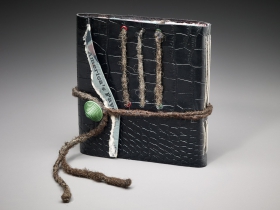 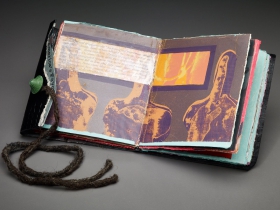 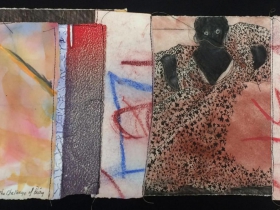 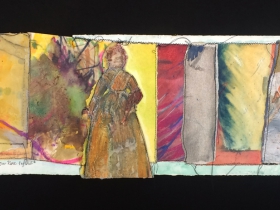 America’s Favor/Guests Who Came to Dinner (And Stayed!) by Evelyn Patricia Terry, is on exhibit at the Lynden Sculpture Garden, 2145 W. Brown Deer Rd., through July 28.

One thought on “Visual Art: Thinking About America”