A One-Stop Shop for Ex-Prisoners

By Allison Dikanovic, Milwaukee Neighborhood News Service - May 3rd, 2019 11:29 am
Get a daily rundown of the top stories on Urban Milwaukee 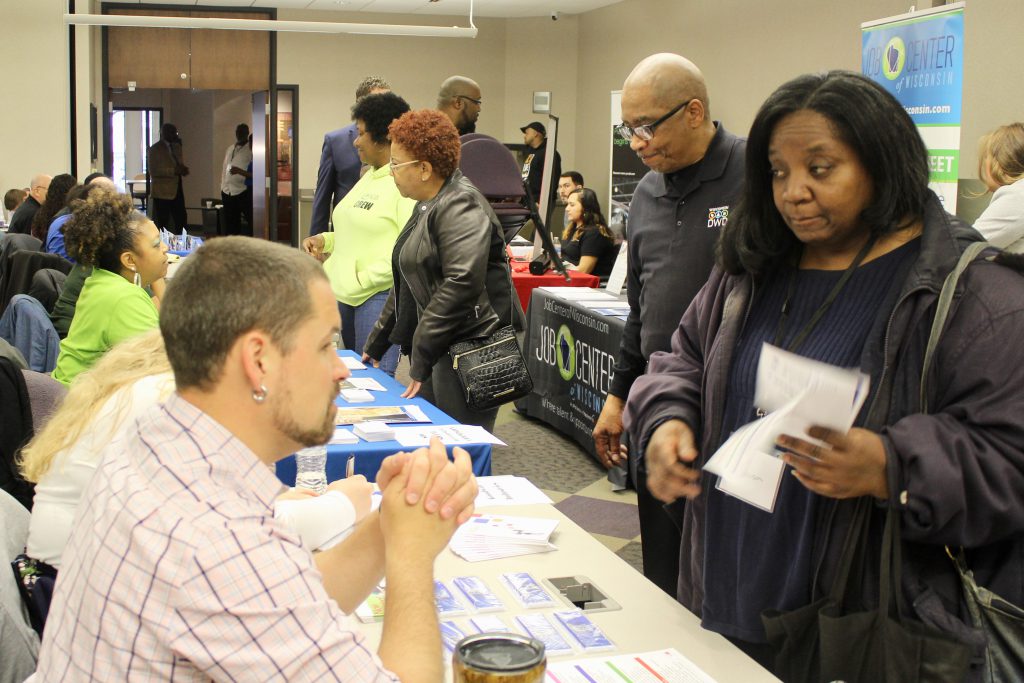 Ray Mendoza remembers coming home from prison in 2015 and being overwhelmed by the harsh adjustment.

He described the culture shock of re-entering society to “returning from the twilight zone” and said that four years later, it’s still something he’s learning how to navigate.

Mendoza said he could have benefitted from some guidance.

Now, he’s working to make sure that others have the kind of support he was looking for. He’s a “violence interrupter” on the city’s Office of Violence Prevention’s 414Life team. He also leads support groups for people transitioning home from prison through a program with the nonprofit Project Return. Most recently, he was part of a group that created Home to Stay.

Home to Stay — also referred to as “First Wednesdays” because it will occur on the first Wednesday of each month — is a one-stop shop of sorts organized by the Milwaukee Community Justice Council and the state Department of Workforce Development for people trying to rebuild their lives in Milwaukee after serving time in prison.

“The biggest barrier that people don’t understand is the mental transitioning from the prison setting to free world setting,” he said. “It’s very, very difficult … to get used to being in an environment that’s not controlled movement like the prisons are.” 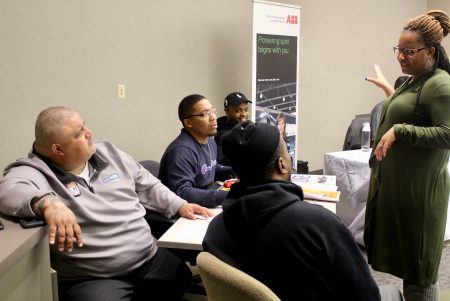 After spending 17 years in federal prison, Mendoza said he wasn’t used to having control over his own life and didn’t know where to begin.

“What do I do? Where do I go? Who do I talk to? And how do I get there?” he would ask, noting that basic tasks seemed daunting. “It’s a lot to take on …  It was almost two decades of me missing out on the upgrades of technology, the upgrades of how people live, the momentum of the streets.”

Attending the fair can count as a required point of contact for individuals on supervision. The first event was held Wednesday, May 1 at Job Center Central, 4201 N. 27th St.

“A lot of times, people who come out don’t know where to go for resources,” said John Thomas, employment and training supervisor for the state Department of Workforce Development and organizer of the event. “A lot of agencies are doing this work in silos, not necessarily sharing information.”

Home to Stay is a collaboration among community-based organizations and private employers, as well as local, federal and state agencies.

Though none of the services at the fair is new per se, the purpose of Home to Stay is to consistently bring together a wide array of resources in one easy-to- access place, at the same time every month, Thomas said.

Mendoza agreed that congregating services will make an important difference.

“To go from a halfway house or wherever they’re staying to go to all these different places where the resources are costs money and takes time,” Mendoza said. “For example, I could have to deal with housing on the Northeast Side, and I might need to take care of my child support on the Northwest Side, and maybe I need to renew my driver’s license on the South Side, and what if I don’t have a car? It can be really hard to navigate all of that.”

Wednesday’s Home to Stay event included about 30 organizations and 16 employers interested in hiring attendees. Many had job applications available. 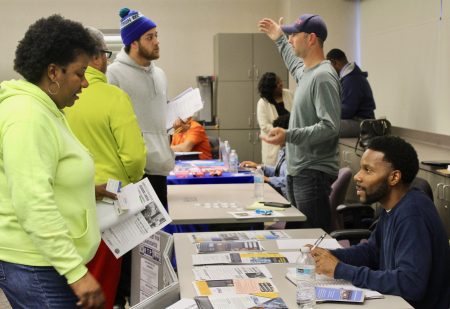 Demetrius Johnson (right) shares information with attendees about how to get into the construction and manufacturing industries. Photo by Allison Dikanovic/NNS.

“Finding employment that pays you enough to pay your rent, pay your bills and help you put some dollars in your savings account once in a while is a necessity,” Mendoza said. “Otherwise it’s easier for someone to return to an old lifestyle that got them in prison.”

Stevie Thompson said he attended the fair because he’s looking for a career.

“I thought I would be able to learn about one or two jobs by coming here,” he said. “But I’ve already applied to five or six.”

Demetrius Johnson, a program assistant for Wisconsin Regional Training Partnership Big Step, had a table at the fair that offered resources for individuals interested in the construction and manufacturing sectors. He said things like the need for proper documentation or a GED can present additional challenges to people transitioning home from prison to find employment, and his organization is one of several that works to help people get those things and get to work.

Thomas said Home to Stay is part of a broader initiative to decrease recidivism in Milwaukee. State Department of Corrections data shows that the first several months post-release are critical to a person’s chances at a successful transition home, as the highest number of reoffenses occur within the first three months after leaving prison.

“I hope at least one or two people get the help they need to achieve their goals—whatever they are—to be a little bit more successful in life,” Mendoza said. “This isn’t going to end all difficulties, but it’s something.”

Resources for those returning home from prison

The next Home to Stay event will be held from 11 a.m. to 2 p.m. Wednesday, June 5. The location has not been announced.

If you or someone you know is returning home from prison and looking for support, these are some of the organizations that were at the first Home to Stay event: