By Danielle Kaeding, Wisconsin Public Radio - Apr 25th, 2019 10:16 am
Get a daily rundown of the top stories on Urban Milwaukee 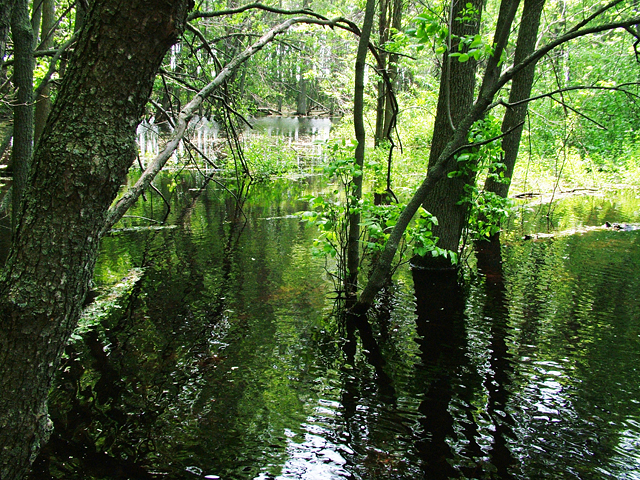 Wetland (ephemeral pond). Photo from the Department of Natural Resources.

Groups supporting conservation and restoration of the Great Lakes and the Upper Midwest are speaking out against the Trump administration for proposing to roll back protections for wetlands and streams.

The U.S. Environmental Protection Agency proposed changes to its definition of “waters of the United States” (WOTUS) that receive federal protection in December.

Policy director Chad Lord with the Healing Our Waters-Great Lakes Coalition said in a conference call with reporters that the Trump administration’s proposal would undermine efforts to restore and protect the Great Lakes.

“It makes no sense to restore wetlands that are essential for water quality, habitat, flood control and recreation while concurrently rolling back protections so that they can be filled in and destroyed,” Lord said.

Wisconsin Department of Natural Resources Secretary Preston Cole wrote in an April 15 letter to the EPA that the proposed changes could eliminate protections for much of the state’s more than 5 million acres of wetlands.

“Many of the small and ephemeral wetlands that would no longer be federally protected are critical to providing food and habitat for migrating, breeding and brooding ducks,” wrote Cole. “Small and ephemeral wetlands provide the best habitat and food sources for waterfowl migrating northward in the spring as they depend on these areas to rest and feed to obtain enough energy for flight and prepare for the breeding season.”

Cole said the removal of protections for streams and wetlands may lead to further loss of rare and threatened or endangered species. He noted Wisconsin had a $20.6 billion tourism industry in 2017 with many visitors coming to fish and recreate in the state.

“The rollback of federal Clean Water Act protections for waterways and wetland impacts is of paramount importance to our environment, quality of life and the state’s economic vitality,” wrote Cole.

Taylor Ridderbusch, Great Lakes organizer with Trout Unlimited, said during the conference call that the proposal would allow more development to degrade hunting and fishing over time in places like the Driftless Area. He added the organization has been working for more than a decade with farmers, and state and federal partners to improve water quality, reduce nutrient loading and reconnect floodplains.

“More than $10 million have been invested in dozens of projects that resulted in 150 miles of restored streams in the area,” Ridderbusch said. “Clean Water is not a political issue. It is a basic right of every American.”

The Trump administration has said the changes will protect the nation’s navigable waters while reducing barriers to business development.

“On December 11, 2018, EPA and the Army signed a proposed rule providing a clear, understandable, and implementable definition of ‘waters of the United States’ that clarifies federal authority under the Clean Water Act while respecting the role of states and tribes in managing their own land and water resources. Unlike the 2015 definition of ‘waters of the United States,’ the Trump Administration’s proposal contains a straightforward definition that would ensure continued Clean Water Act protection for the nation’s navigable waters like the Great Lakes, result in significant cost savings, and help sustain local economic growth. EPA is committed to working with states and communities in our ongoing restoration efforts, such as those related to the Great Lakes, Chesapeake Bay, Everglades, and Gulf Coast.”