By Shamane Mills, Wisconsin Public Radio - Apr 18th, 2019 11:35 am
Get a daily rundown of the top stories on Urban Milwaukee 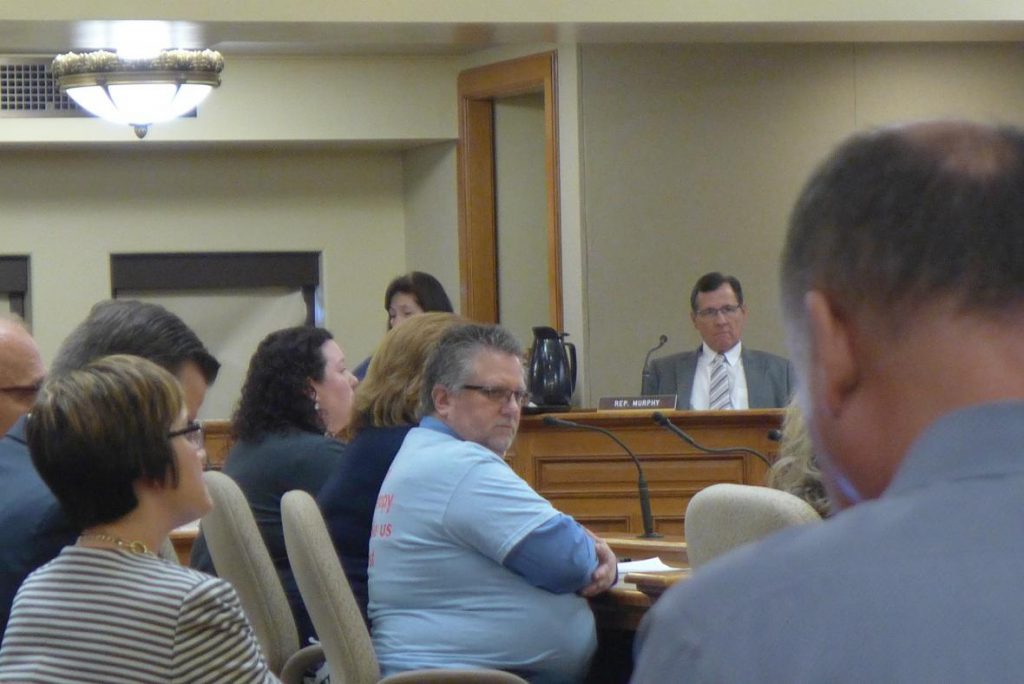 Several people with chronic medical conditions told state lawmakers they support a bill that could result in fewer medication denials by insurance companies. Donald Diehl, of Kenosha, said he was in severe pain for several months because his health insurer wouldn’t pay for the drug that his doctor recommended for his rheumatoid arthritis. Photo by Shamane Mills/WPR.

State lawmakers are wading into the issue of rising prescription drug costs with an effort to get patients access to medications they need.

The Legislature’s Assembly and Senate health committees held a joint hearing Wednesday on a bill that would provide exceptions to what is known as “step therapy.” The practice requires a patient to try a certain treatment and have it fail before using another, even if their doctor disagrees.

Patients, doctors and advocacy groups for multiple sclerosis, psoriasis, arthritis and other chronic conditions urged legislators to support what they called common-sense guardrails on the use of step therapy.

Donald Diehl, of Kenosha, has rheumatoid arthritis and said he couldn’t initially get the medication his doctor recommended.

“Pain shot through my arms, my fingers, and there was further joint degeneration in my knees,” he told lawmakers. “I’m 58 years old. The crippling effects of this step therapy decision made me feel like felt like I was 90.”

Diehl said he eventually got a drug that worked better, but said he’ll need both knees replaced.

The bill, authored by state Sen. Alberta Darling, R-River Hills, and state Rep. John Nygren, R-Marinette, would provide medical exceptions to step therapy, outlines an appeal process and would give insurers 72 hours to grant or deny a request.

Health care providers said it can currently take weeks or even months to hear whether an insurer will cover a drug or not.

Increasing administrative burdens can lead to physician burnout, said Joanna Bisgrove, a family physician with SSM Health in the city of Oregon and who co-chairs the Wisconsin Academy of Family Physicians legislative committee.

At UW Health, nurse practitioner Jocelyn Wilke said they have 50 employees whose only job is to pre-authorize medications and challenge denials by insurers.

“It’s countless hours, day in and day out, trying to find a compromise between insurers and patients,” said Wilke.

But with the rising price of drugs, doctors have to be mindful of prescription costs, said Chris Kastman, the chief medical officer for Group Health Cooperative and also administers the health insurance plan offered by GHC.  Step therapy can benefit patients, he said.

“Oftentimes, we use step therapy to make sure the best medication is used even if it’s not the cheapest. For instance, there’s a drug for psoriasis called Siliq, which is cheaper than its alternative, Cosentyx. But Siliq has a black box warning for being associated with suicidal ideation. So in our step therapy protocol we favor the more expensive drug,” Kastman explained.

The Wisconsin Association of Health Plans said it won’t oppose the bill as long as officials can continue to use step therapy in ways they consider appropriate. The bill would only apply to private insurance, not Medicaid.