By Corri Hess, Wisconsin Public Radio - Apr 13th, 2019 01:50 pm
Get a daily rundown of the top stories on Urban Milwaukee 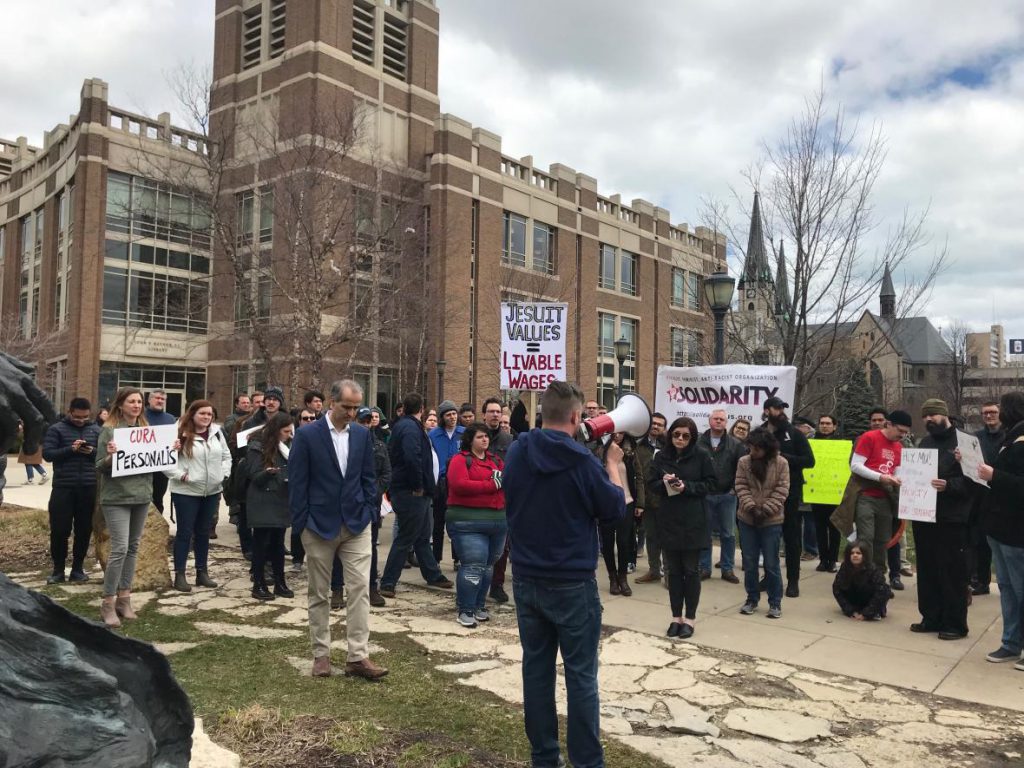 Standing in front of the Father Marquette statue, dozens of Marquette University non-tenured-track faculty and graduate student workers held a rally Friday asking university administration for a fair process to form a union.

The group is seeking more job stability, higher wages and health insurance. Adjunct faculty are typically given six- or nine-month contracts. Nationally, contingent faculty make on average $20,000 a year and $2,700 per class. At Marquette University, they are not offered health insurance.

Thomas Hansberger has taught ethics at Marquette for about three years. He said the contradiction between what he was teaching and how the university treats its employees began eating away at him.

“I’m teaching them that everyone deserves basic respect,” Hansberger said. “In real life, I don’t see that happening here. We’ve seen no health care for educators. We have very low wages. I feel like we have to live those values in practice, or what are we doing trying to teach them to our students.”

In a statement, a Marquette spokeswoman said the university respects the lawful right of employees to decide if they want to unionize.

“Our preference is to maintain a direct working relationship with all of our faculty, without a third-party intermediary who does not share our mission, history and commitment to offering a transformational education for students,” the statement said. “Marquette’s current operating model of utilizing a mix of tenure-track and non-tenure-track faculty helps control costs, maintain flexibility and offers our students unique perspectives, while at the same time ensuring we are providing the highest-quality transformational education at a price that is competitive with our peer universities.”

Sue Giaimo has taught political science at Marquette for 15 years. She said not knowing if she will have classes to teach until two weeks before the semester begins is hard on her family.

“Our colleagues respect us, our department chairs support us,” Giaimo said. “But they are powerless. These issues go much above any department or college. This is a Jesuit university that wants to live its values, but right under its nose has major inequity that needs to be addressed.”

The faculty was supported Friday by the Service Employees International Union, or SEIU, a labor union that represents nearly 2 million workers in the United States.

If the SEIU secures signatures from 30 percent of the non-tenure-track faculty members, the National Labor Relations Board will conduct an election.

Sameena Mulla, a tenured anthropology professor at Marquette, read a letter to the group in support of the non-tenured-track faculty. The letter, signed by 70 tenured professors, was delivered to Marquette administration.

“We are dismayed to see Marquette University following a troubling national trend, moving deeper into a two-tier system of labor with tenure-track academic labor on one side and non-tenure-track academic labor on the other,” the letter read. “We believe that this effort to establish a shared voice for workers that might be a source to uplift resonates deeply with Marquette’s Jesuit values.”