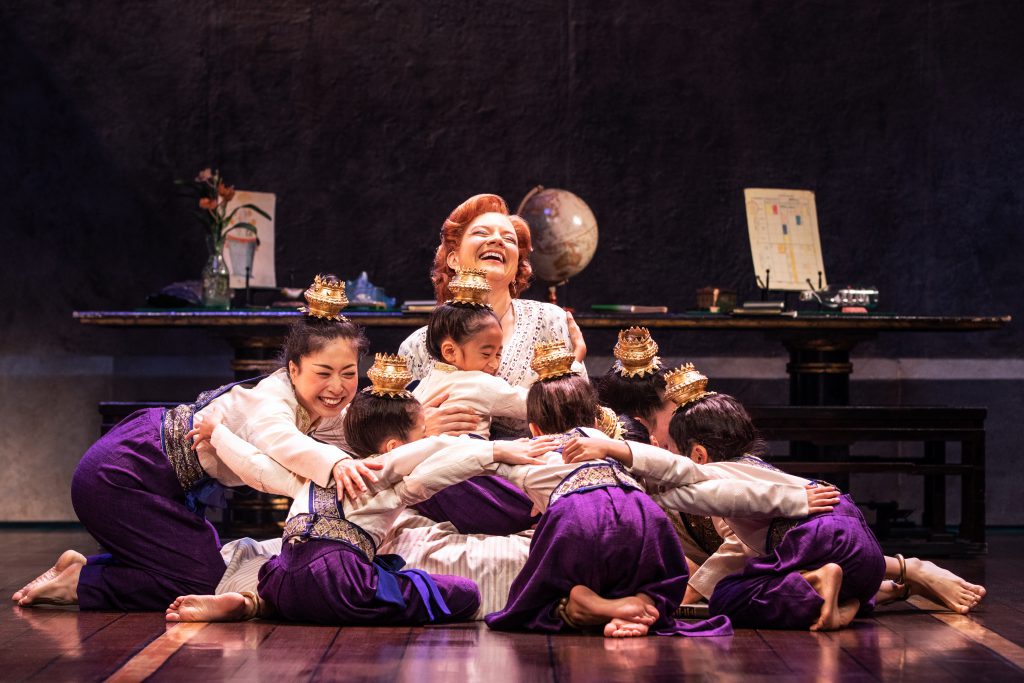 Angela Baumgardner as Anna Leonowens and the Royal Children in Rodgers & Hammerstein’s THE KING AND I. Photo by Matthew Murphy.

Praising the Broadway touring production of The King and I – settling into the Marcus Center for the Performing Arts through April 14 – might feel a bit like ignoring the cultural time warp of the MeToo generation and encouraging old-fashioned Western paternalism toward the East.

Not so. There are some aspects of this cultural mishmash I can never accept – such as young lovers from Burma exchanging romantic Western ballads and the constant feeling that Asian culture is being treated as the white man’s burden to solve – but neither I nor director Bartlett Sher (with fine restaging by Shelley Butler of Sher’s Lincoln Center production that won Tonys in 2015) have totally lost our senses.

He has gone out of his way to examine and stage convincingly some of the larger meanings hidden in this musical and pointed out how our current cultural attitudes may be rejecting some lessons of the past about evolving into better viewpoints.

It will be the famous tunes of Rodgers and Hammerstein that bring you in (“Getting to Know You,” “Hello, Young Lovers,” “Whistle a Happy Tune,”). But there are other depths, including intellectual ones, to ponder: The delicious instrumentation and percussion fancies of the less famous classic orchestration. The noted acting duels as well as the climactic dance between Anna the schoolteacher and the self-centered King of Siam. And most particularly, the fabulous re-creation of the original Jerome Robbins “Small House of Uncle Thomas” ballet, a still potent mix of Asian imagery, Noh theatrics and English mime.

The choreography has been fine tuned by other hands but the Robbins framework is unsurpassed in 68 years of Broadway.

Seven decades ago with this and South Pacific, Rodgers and Hammerstein were challenging America’s one-color attitudes about race and colonialism, so strongly they were accused by some critics of the time for “political correctness.” Many fervent productions welcomed how without preaching the story was bringing some racist common sense to America. Anna’s softening the Siamese culture by standing her ground was considered a lesson in womanhood for the ages.

The ages brought other ideas that swept King and I aside. First the original book, Anna and the King of Siam, fell into historic disrepute, emerging as a white person’s exotic manipulated tale of bringing culture to the natives.

Professional revivals of King and I and squeamishness by community theaters over the years helped bring an end to “Yellowface” casting (a theatrical term for Caucasians taking Asian roles), and King and I was a centerpiece of this change. Yul Brynner, the original and Caucasian king, brought such an aura of masculinity to even the king’s moments of humility, that it has taken time to see the other dimensions of the character – such as his scholarly and childish moments.

And women have risen to a place in our society where Anna’s proclamation that they are as good as men runs into many today who think that women are, honestly, better than men. So uplifting the concubines doesn’t quite do it. Nor does reform of Siam seem sufficient as slavery continues even if Anna’s influence eliminates toady groveling before the king.

In this production, Pedro Ka’awaloa is capable handling the more vulnerable petulant side of the king’s role, which is fine. As his son, Timothy Matthew Flores serves as a sullen doppelganger until he turns boyish.

But they are in a sumptuous production that is giving more weight to the women no matter how much the men whip their cloaks around. Sher may say that feminist emphasis was always there, but he has brought it out in ways that many productions into the 1990s didn’t. They all had a field day with the king’s chauvinism toward women, but without the subtle reminders. Sher even inserts back into the show a number often cut, “Western People Funny.”

DeAnna Choi as Lady Thiang, the dutiful first wife of the king, has always seemed dragged into productions to sing the beautiful “Something Wonderful.” But Sher, in rotating staging and bringing a sense of stillness and duality, makes her a counterpoint as he does for other characters at crucial moments. And she does sing beautifully.

The children are polished to the edge of over-cuteness and the peeks under Anna’s hoop skirts are always delightful. In fact, all the young performances are so perfectly timed that it’s strange that Hayden Bercy as young Louis sings to perfection but seems to have been overly coached into unnatural speech.

This show’s Tuptim, played as delicate iron by Paulina Yeung, is not the typical kissy ingénue of past productions, but a slave whose rebellion is deeper than love. As her lover, Brandon Shan Chu seeks to dominate with his high baritone, rather than blend with the more lyrically sensitive Yeung. Every moment Sher can give her to stride away with grace, he does.

The true star of this show is the best Anna I have seen, Angela Baumgardner, whose singing is accomplished and touching. But she gives the role just the right matronly air of defiance and 19th century grace. The role has turned some actresses too operatic, others too flirtatious and others too schoolmarmish. Not here — due to Sher’s conception and Baumgardner’s smart execution.

The ending – the king’s dying to regrettable musical and plot accolades – has always struck me as maudlin. But that’s built in and can’t be redeemed. Nor, when all is said and done, can I quell my sense that this is still the white man’s vision of the flaws in both cultures, locked into Western melodic lines no matter how creatively Rodgers attempted to break patterns.

But I sure admire Sher’s effort to reclaim the original and solve it. No one can deny it is among the most elegant productions to be seen this year.

King and I Gallery 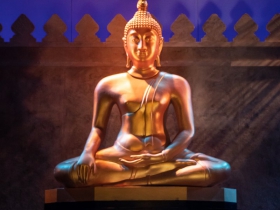 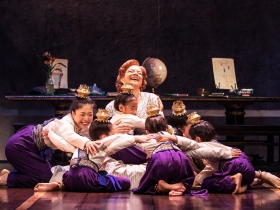 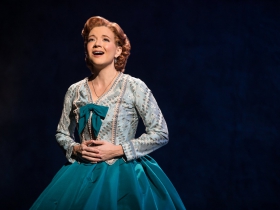 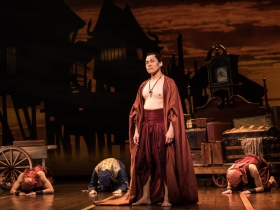 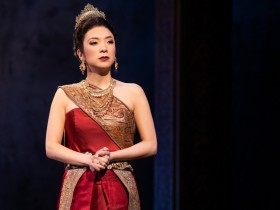 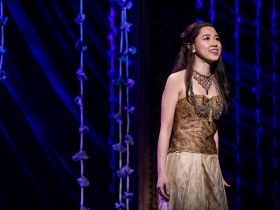