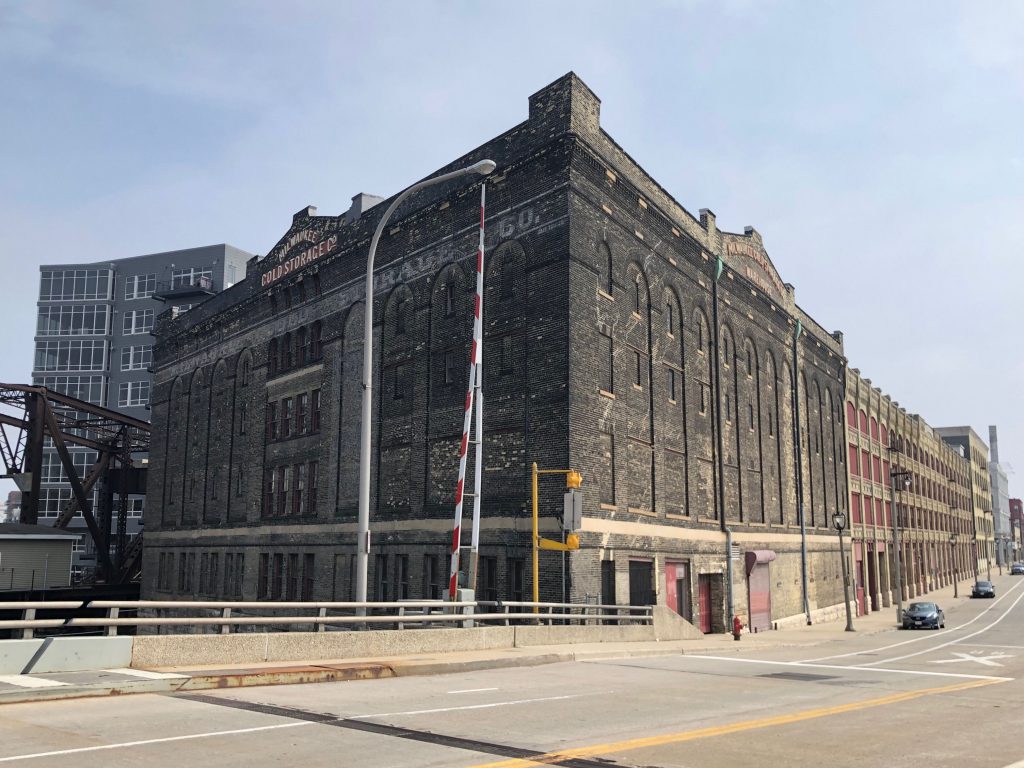 In the late 19th century, a group of Milwaukeeans organized the Milwaukee Cold Storage Co. for the purpose of erecting and operating a facility for the storage and distribution of “butter, cheese, eggs, fruit, game, poultry, etc.”

Among the incorporators was E. R. Godfrey, whose wholesale commission company eventually became Roundy’s, Inc., which gave birth to Pick ‘n Save, now the city’s largest grocery chain, under the ownership of Kroger Co. Other members included W. H. Stevens, also in the grocery business, E. J. Lindsay, whose warehouse supplied implements to farmers throughout the northwest, and William Woods Plankinton, son of a pioneer Milwaukee meatpacker.

The president of the concern was Mr. A. I. Dexter, the inventor of the “Dexter System of Cold Storage.” Dexter’s system involved the circulation of outside air over beds of ice, thus providing a year-round temperature between 10 degrees and 60 degrees Fahrenheit. The members of the company subscribed $100,000 in 1892 to erect a building for the purpose of storing 500 carloads of perishables in a 600,000 cubic foot, 5-story structure located at what was then 50-62-Reed St.

The architects were Milwaukee’s Charles D. Crane and Carl C. Barkhausen. The pair started their firm in 1888, after working for five years with Edward Townsend Mix. Mix built some of the most complex structures of the era, including the Mitchell Bank and the Chamber of Commerce building, not to mention countless railroad stations and facilities. This gave the architects experience needed for a commission such as this one.

Today, the imposing structure has a street address of 100 S. 2nd St.; it is the first building one encounters as one enters the South Side from Downtown. Pediments on two sides announce its name, and the Romanesque structure has two-foot-thick Cream City Brick walls. The building is almost entirely lacking in windows, as befits a refrigerator, although potential fenestration is indicated in the detailing of the cream city brickwork. The location was ideal at the time of its construction. It had 140 feet of dock space along the Menomonee River, where it vied for space with a railroad swing bridge. The building also had its own siding to its east, immediately abutting the main line of the Chicago, Milwaukee & St. Paul railroad. It could accommodate simultaneous loading and unloading of cargo. The site was just across the river from Commission Row, where the produce would be headed for eventual sale in the groceries and market stalls of the community by horse teams. With over 30 rooms, it was billed at the time as the “largest cold storage house in the State of Wisconsin.”

By 1910 Dexter’s system, which involved using ice harvested from the river, was supplanted with a mechanical refrigeration system, involving brine tanks, condensers and ammonia. The latter item occasionally leaked, ruining produce and occasioning a 1950s-era lawsuit between the building owners and York, the company responsible for the cooling apparatus.

However, just as the commission merchants moved from their Third Ward neighborhood to outlying districts, so did the giant cold storage facilities such as this one, usually to one-story structures with advanced refrigeration and insulation, along with modern loading docks for the semi-trailer trucks that had long since supplanted the horse and cart.

For decades, the building has provided a backdrop to S. 2nd St., which, also for decades, was a desolate strip of mostly boarded-up buildings. However, the significant changes that followed the renovation of the thoroughfare this decade virtually made it certain that this old pile would face a new future. It was recently announced that the building was purchased for $300,000 by a group affiliated with Josh Jeffers. Jeffers says he will add the building to his inventory of upcoming projects, which are numerous. Jeffers has specialized in the use of Historic Tax Credits, for which this building would likely qualify.

Although the building is assessed at over $1 million, the purchase price of $300,000 can be justified due to the complexities of the site, the nature of the structure, and any number of problems that might lurk within its two-foot thick brick walls. In fact simply cutting windows into walls that thick represents a complexity of its own. Instead of an alley behind the building, it has an active double-track railway, which may also negatively impact the value of the structure for purposes of finding a new use for it. The north end of the trapezoidal structure lies beside a swing bridge that is usually positioned to block maritime traffic, and afford unimpeded access for the many trains that pass through daily. Occasionally it will open to allow ships, increasingly rare, to pass through. When it does so, it swings flat along the side of the building. It is quite a show.

It is not certain when Jeffers will commence work on this old building, but it and the adjacent Lindsay building give us one of the few remaining chances to see a disappearing Milwaukee — old industrial buildings, past their prime for their original purposes, but as yet little changed. 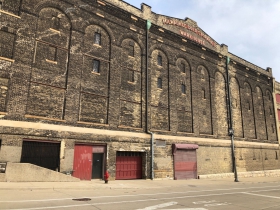 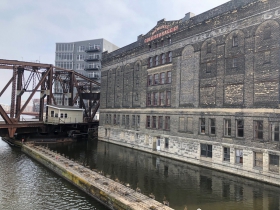 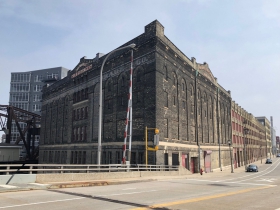 History of building when new: