By Corri Hess, Wisconsin Public Radio - Apr 5th, 2019 10:24 am
Get a daily rundown of the top stories on Urban Milwaukee 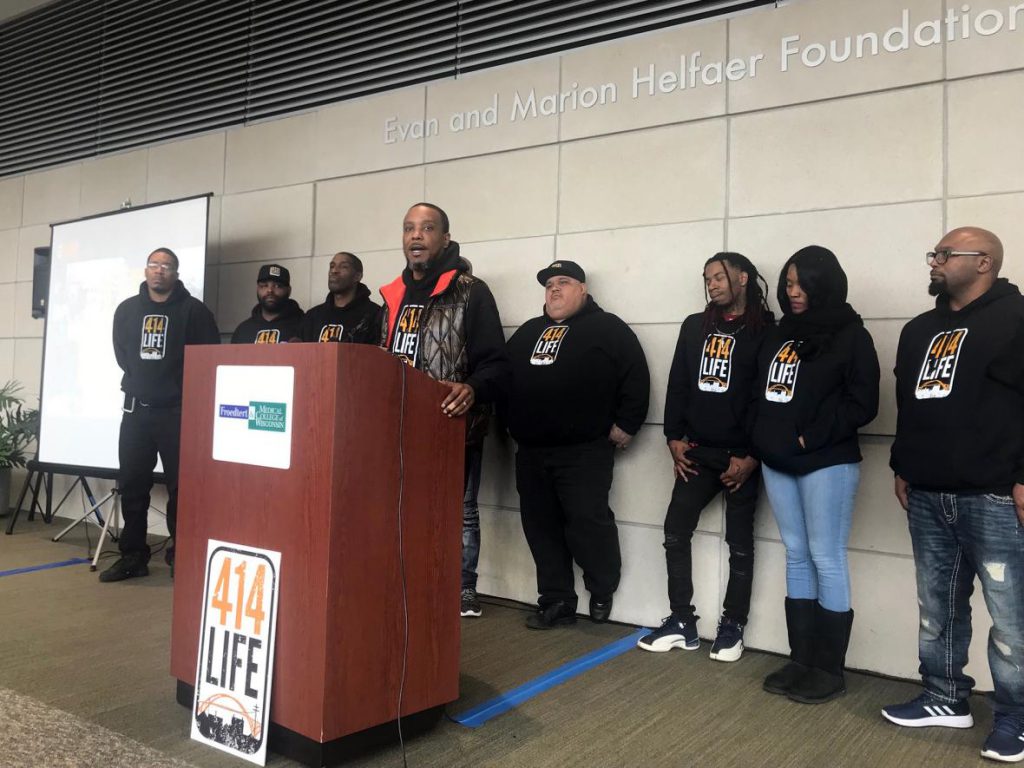 Chris Conley, speaking at the podium, is one of 10 violence interrupters for Milwaukee’s new 414Life program. Photo by Corrinne Hess/WPR.

With gun violence continuing to plague some Milwaukee neighborhoods, the city has decided to treat it as a public health problem.

Through partnership with Froedtert Hospital & the Medical College of Wisconsin and Ascension Wisconsin, messengers from the community, known as violence interrupters, will disseminate through the city’s most crime-ridden neighborhoods to provide advocacy.

A site director and a team of 10 violence interrupters and outreach workers have been hired to implement the program in the city’s Garden Homes and Old North Milwaukee neighborhoods.

The $500,000 program will be paid for mostly by the city of Milwaukee, with some grant money coming from local nonprofits. The city is hoping to expand the program to three neighborhoods by 2021. The interrupters grew up in the neighborhoods they are working in. Many have had trouble with the law themselves, said site director, Derrick Rogers.

“Outreach workers have already identified a caseload of 35 individuals that are at high risk of being shot or being involved in a shooting,” Rogers said. “They have been mentoring, directing them to resources and spent countless hours canvassing the neighborhoods. Soon they will have a presence in the hospitals.”

He is now a violence interrupter.

“When you look at our past and say ‘why are they chosen for this work,’ it’s because we come from these elements,” Conley said. “We understand the lingo. We love our neighborhood. What you see up here, is a change from normal to the new normal.”

Violent crimes are down throughout most of the city, however 12 of Milwaukee’s 190 neighborhoods continue to struggle. The Milwaukee Police Department is focusing on five of the most high-crime neighborhoods this year.

“This is not a law enforcement strategy, this is a health strategy,” Common Council President Ashanti Hamilton said about the 414Life program. “This is so important because it is frontline.”

There have been 18 homicides so far in Milwaukee this year, down from 22 homicides during the same period last year. There were a total of 101 homicides in Milwaukee in 2018.

The Milwaukee partnership is being modeled after Cure Violence, a successful violence prevention program based in Chicago.

Cure Violence was launched in the late 1990s by a public health professor at the University of Illinois-Chicago. The program has since gained national attention and been implemented in multiple cities around the world.

In 2013, the city of Chicago did not renew a million-dollar grant to Cease Fire — the name of Illinois’ Cure Violence program. Some city officials didn’t feel the program worked closely enough with the state, according to a 2017 story by NPR. Others disliked many of the violence interrupters were former criminals, the story said.

The program lost most of its funding from the state in 2015 during a long budget battle. It now runs a scaled down version with private donations and grants.

But in New York City, the program has been fully embraced, according to NPR. In 2017, New York City was investing $25 million in its Cure Violence efforts.