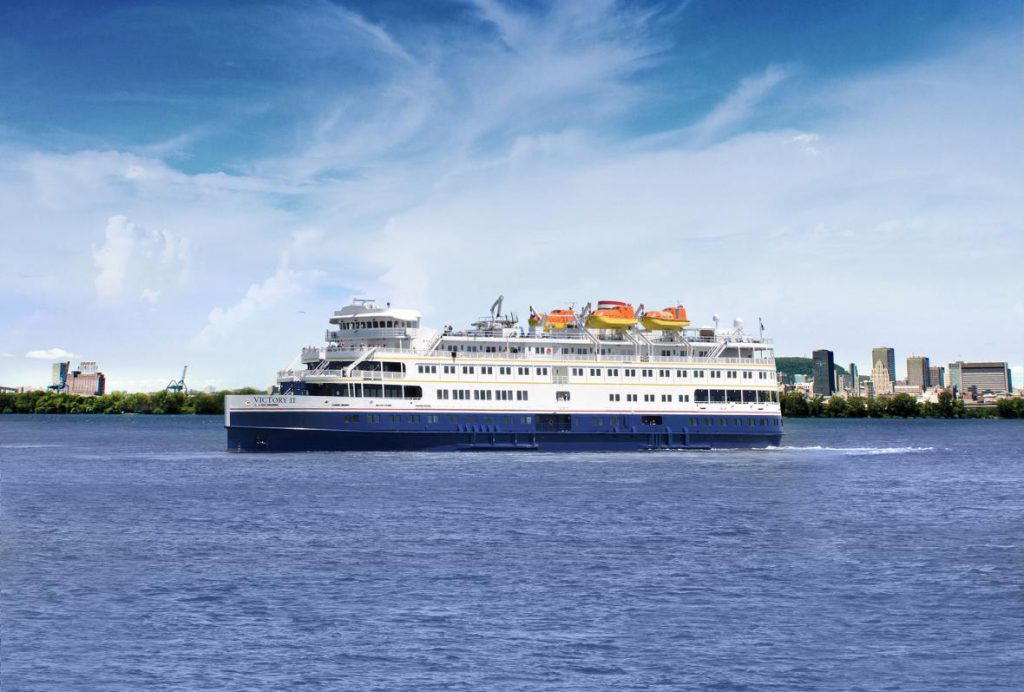 The Victory II (above) is a sister ship of the Victory I. Photo from Victory Cruise Lines.

Milwaukee could be in line for major growth in tourism from an unlikely source: cruise ships.

The city, under Port Milwaukee director Adam Schlicht, is courting the highly desirable turnaround cruise ship business. As Schlicht explained to the Harbor Commission’s marketing committee Thursday afternoon, a ship would dock in Milwaukee with 200 to 400 passengers disembarking at the end of a Great Lakes cruise. Come the next morning a new group of passengers would get on the ship and off they go.

“We’re flipping passengers for them, which obviously captures a lot of hotel stays,” said Port Milwaukee trade development representative Jazmine Jurkiewicz. “The turnaround port, that is the angle for Milwaukee.”

The city will get its first test this summer; 11 ships plan to call on Milwaukee. Much of it will be for turnaround service, not the less desirable eight-hour visits used in the middle of a cruise. “We think this is just the beginning,” said Schlicht.

And more cruise ships could be on the way in the coming years. “Cruising on the Great Lakes is becoming a burgeoning industry. We know of certain cruise lines that are planning to enter the Great Lakes,” said Jukiewicz.

Schlicht declined to answer if the city has had discussions with any prospective operators. But there is mounting evidence of a big vision. As part of the $265 million Komatsu deal in the Harbor District, the city retained a 45-foot wide strip of land for a riverwalk and possible cruise ship terminal.

Schlicht also formed the Milwaukee Cruise Collaborative (MCC) earlier this year. The group includes organizations ranging from VISIT Milwaukee and Milwaukee Downtown to the airport and tour operators. Schlicht said the group is designed to give the city an edge in marketing to prospective cruise lines.

The Chicago Tribune published an article on the Great Lakes cruise industry earlier this week that identifies a number of existing operators planning to grow existing offerings, including with new ships, and new operators that might enter the market for the first time.

Great Lakes cruises have one logistical challenge coming from the lakes’ role as the country’s northern border: customs. Many Great Lakes cruises include alternating stops at Canada and US ports, requiring repeat customs checks. Jukiewicz said the issue was previously mitigated with agents and mobile checks, but the United States government now requires a physical structure.

Milwaukee doesn’t have such a facility, but that doesn’t concern Schlicht. “Milwaukee wouldn’t need to invest in a $10 million terminal because a lot of the passengers are clearing customs at their airport,” said Schlicht.

The three United States cities with such a facility include Detroit, Sault Ste. Marie and Cleveland. Any cruise ship coming to Milwaukee from Canada or another international port would need to stop at one those cities first. Cleveland, Schlicht said, is financing its facility by increasing its per passenger fee to $30, while Milwaukee’s fee remains at $7.50.

Cruise Ships for the DNC

And while the city’s cruise ship business is poised to explode, the 2020 Democratic National Convention isn’t likely to have an impact.

Schlicht presented a slide that showed the port has had inquiries, but no operators have committed or expressed interest.

Who is inquiring then? Schlicht laughed when I asked. “The media,” said the port director.

Hypothetically, a cruise ship could provide passengers an additional 200 hotel rooms, but it appears the operators so far are content to continue their normal cruise service. Great Lakes cruises, which often run from seven to 10 days, regularly cost in excess of $5,000 per person.

Schlicht worked for federal government’s Saint Lawrence Seaway Development Corporation in Cleveland when the Republican National Convention came to the city in 2016. He said a similar idea was discussed, but nothing materialized.

Miami, which Milwaukee beat out for the 2020 convention, included the use of much larger cruise ships with thousands of rooms in its DNC bid.

So while the Hawaii delegation may not end up spending the night aboard a cruise ship in Lake Michigan, Schlicht believes the DNC has at least one piece of good news for the port: it won’t be closed.

A security perimeter for the July 2020 has yet to be released.