It’s All Fresh at Vientiane 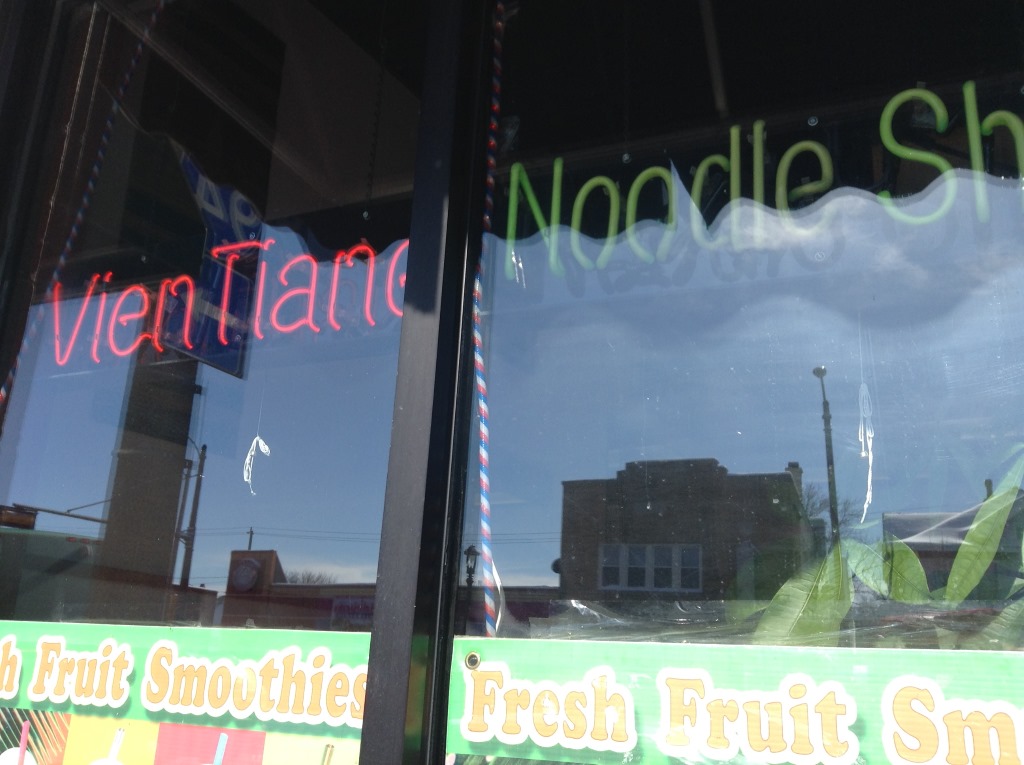 I first encountered Vientiane Noodle Shop a year ago, during the Phobruary promotion, when their pho was on sale for $5.00 during the month of February. Today, you will pay $9.99 for a large bowl of that same pho, a rich beefy broth filled with noodles, scallions, and your choice of beef and meatballs — a combo of beef meatballs and seafood, chicken, spicy duck, and oxtail — or the veggie version with tofu.

After exclaiming over the complex flavors in the pho, I wanted more from this extensive menu that combines Thai, Laotian, and Vietnamese cuisines. As our server explained, these countries share borders so it makes sense that the food represents each of their specialties.

Vientiane has an inconspicuous presence on the street, as their red neon signage in the front window is easy to overlook when you drive by on this cluttered section of National Avenue. Half a dozen tables and six seats at the counter fill up during the lunch rush, but come earlier or later and you’re guaranteed a seat. Parking can be problematic, but you should find something on National, just west of 35th.

On two visits, friends and I ate our way through as much of the menu as we could fit in our bellies. The word that came up with every dish was “fresh,” starting with the Spring Rolls served with peanut sauce. Each roll held more BBQ pork and shrimp than lettuce and rice noodles, enough to call these overstuffed rolls a light lunch. At $3.49, that’s economy in two flavor-packed packages.

Also, from Appetizers, Vientiane Meatballs could easily serve a table of four. These small football-shaped meatballs seasoned with garlic and black pepper, were also the least interesting dish we ordered, while the fried Vientiane Sausages were the most surprising. These pork sausages, stuffed with ginger, lemongrass, dill, black pepper, green onion, and lime leaf, had a flavor unlike any sausage I’ve tasted in Milwaukee, city of Usinger’s. Lemongrass and lime leaves added the scent of spring. That combination transformed what might have been just another sausage into something potentially addictive. They served them with sweet and sour sauce, an unnecessary addition, or as my companion and I agreed, why mess with perfection.

Also, on the Appetizer menu, Bahn Seo, pork-filled crepes combined BBQ pork, green onions, and bean sprouts. The crisp fried crepe, seasoned with turmeric, made a delicious package for the filling, while the accompanying sweet and sour sauce added extra flavor to the meat.

On the menu, they call the noodle dishes Noodle Soup, but this is misleading. For example, Pad Vientiane, my entree, was a plate of carrots, broccoli, crunchy beans, udon noodles, and shrimp, in a light sauce that hinted, again, of lemongrass. The perfectly cooked thick noodles were soft, chewy, and coated with sauce. This was where I took advantage of the commercial sauces on the table and added Soy, Hoisin, and Sriracha.

From Rice Entrees, although there was no rice in the Kang Phet Curry my companion ordered, she found this bowl of coconut milk broth with basil leaves, bamboo, mushrooms, sliced eggplant, lime leaves, and shrimp, manna from the gods. Again, a whiff of lemongrass gave the dish a uniquely Thai twist, while basil and lime leaves added fresh to this tasty curry, or, as we decreed, Vientiane’s version of comfort food.

Sliced BBQ pork showed up again in Kao-Moo-Deng, this time served over rice along with sliced tomatoes, sliced cucumber, and cilantro. If you are looking for a low-calorie healthy dish at Vientaine, this one’s for you. They added a light broth-soup, sweet and sour sauce, and either  jasmine or sticky rice.

What we didn’t notice until it was too late, was the inconspicuous note taped to the wall with Lunch Specials available from 10:00-3:00 Monday-Friday. Pad Thai, Pad Sieew, and the Vientaine Stir Fry, along with a cup of soup, one spring roll, and fried rice, are $7.99. You might find less generous portions, but for the price, it’s a deal too good to pass on.

What I can’t pass on is dessert and Vientaine’s Fried Bananas with Ice Cream didn’t let me down. Two bananas, deep-fried in crunchy eggroll wrappers, with three scoops of vanilla ice cream, topped with whipped cream and chopped peanuts, made an ideal finale to my lunch. Twice! 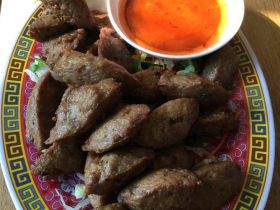 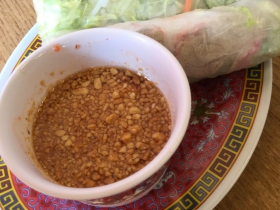 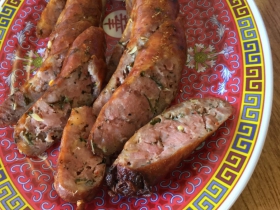 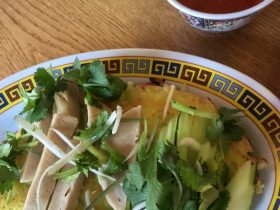 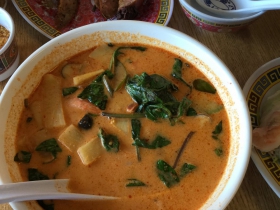 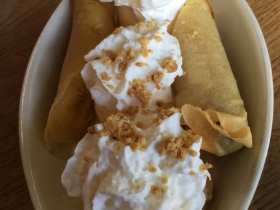 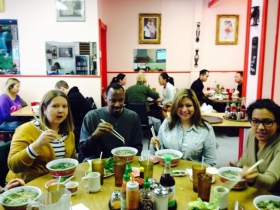 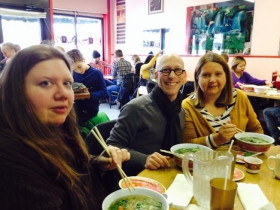 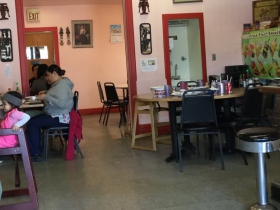