By Shawn Johnson, Wisconsin Public Radio - Mar 29th, 2019 11:23 am
Get a daily rundown of the top stories on Urban Milwaukee 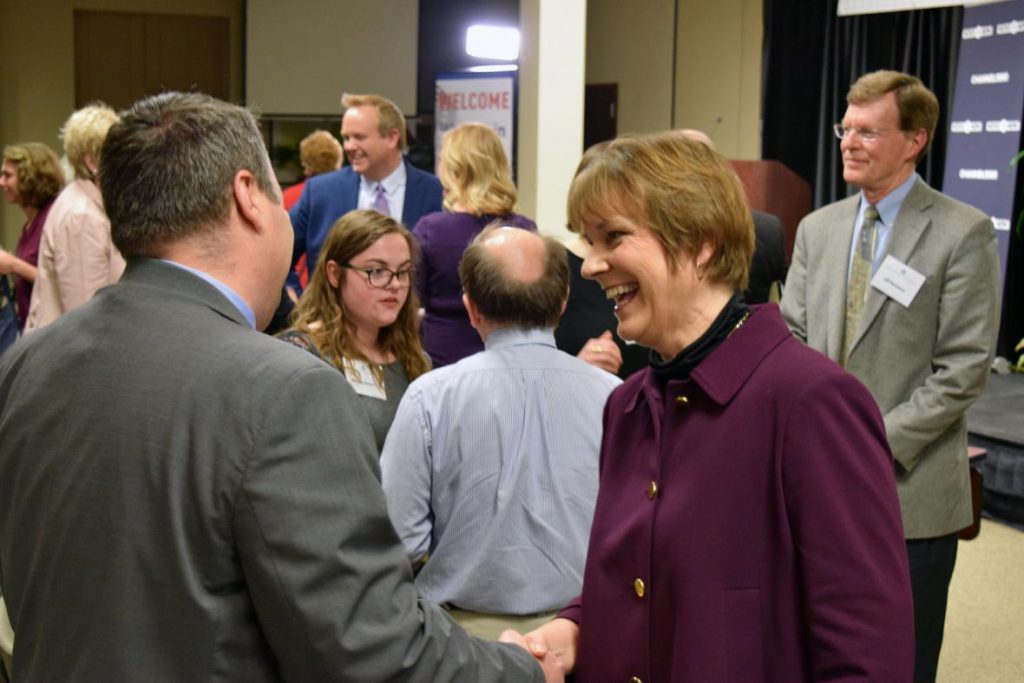 Almost every candidate tries to stay on message when they run for statewide office. Wisconsin Court of Appeals Judge Lisa Neubauer is no exception.

During a recent state Supreme Court debate with appeals court Judge Brian Hagedorn, it wasn’t hard to guess which points Neubauer wanted the audience to remember.

“My record shows that I am tough but fair,” Neubauer said to begin the debate. “I am fair, impartial and independent.”

“We have to have our next justice be fair, impartial, independent,” Neubauer said moments later.

That was just during her opening statement.

Neubauer repeated some variation of “tough, independent and fair” at least a dozen times during that debate.

She drove home other points, too. For more than a decade, she said, she has been a judge, and she has endorsements from the vast majority of judges throughout Wisconsin.

“Over 98 percent of the judges endorsing this race are supporting me,” Neubauer said. “And they are willing to support me publicly.”

Neubauer and Hagedorn are both vying for the seat being vacated by retiring Justice Shirley Abrahamson.

But compared to recent Supreme Court campaigns, what Neubauer is saying is decidedly less partisan.

Holder, Others Rile Up Democratic Base

Neubauer is taking this nonpartisan approach while others are firing up the Democratic base on her behalf.

During a recent visit to Madison, Holder said he didn’t worry that his support for Neubauer would undercut her nonpartisan message.

“It’s not as if Republicans aren’t doing the same thing,” Holder said. “It’s not as if business groups aren’t pouring tons of money into these races. I’m just dealing with the reality of the situation. So, you know, I’m proud to be here and I’m proud to support Lisa.”

In the early going of this race, Republican groups weren’t supporting Hagedorn to the degree that liberal groups were backing Neubauer, which is a rarity for state Supreme Court campaigns.

The liberal Greater Wisconsin Political Fund has spent weeks running ads on Neubauer’s behalf, attacking Hagedorn for comments he made on a personal blog and for his support of a Christian school that bans homosexual activity.

Hagedorn got a financial boost this week when the Republican State Leadership Committee announced a seven-figure ad buy supporting him.

But Hagedorn said there’s a reason liberal groups like Holder’s are supporting his opponent.

“They want to take over the Supreme Court because they want to politicize it,” Hagedorn said. “They want the court to be a part of their political agenda. And they think Judge Neubauer is exactly the person for the job.”

She also steers clear of many of the buzzwords candidates use to hint at their political leanings. She won’t even say who she considers her most influential Supreme Court justices.

“To the extent people want to understand sort of where I come from, what my philosophy is, I ask that they judge me based upon my record,” Neubauer said.

Hagedorn’s campaign argues Neubauer’s statements conceal her true intentions on the court, and leave voters guessing about what kind of a justice they’d be getting if she’s elected.

Neubauer’s backers argue it isn’t Holder’s support that’s key in this race, pointing instead to Neubauer’s experience on the bench. Neubauer has served more than a decade as a state appeals court judge after she was first appointed to the job by former Gov. Jim Doyle.

What’s unusual about this race is that Neubauer and Hagedorn both serve on Wisconsin’s District 2 Court of Appeals. In other words, they’re co-workers.

District 3 Appeals Court Judge Lisa Stark, who has endorsed Neubauer, said that makes it especially telling that more than 340 judges have supported Neubauer over Hagedorn.

“That says a lot,” Stark said. “Their decisions are reviewed by her on a regular basis or they work with her directly. And they also work with Judge Hagedorn. And they know the two of them. And they have supported Judge Neubauer.”

Conservatives currently hold a 4-3 majority on the Supreme Court. A Hagedorn victory would expand that margin.

A Neubauer win would preserve it and set the stage for a 2020 campaign that could flip the court’s ideological balance for the first time in more than a decade.