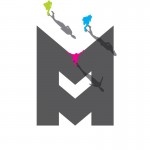 Runner Ben Lamers lays out the course, also for Half Marathon, on April 6th. 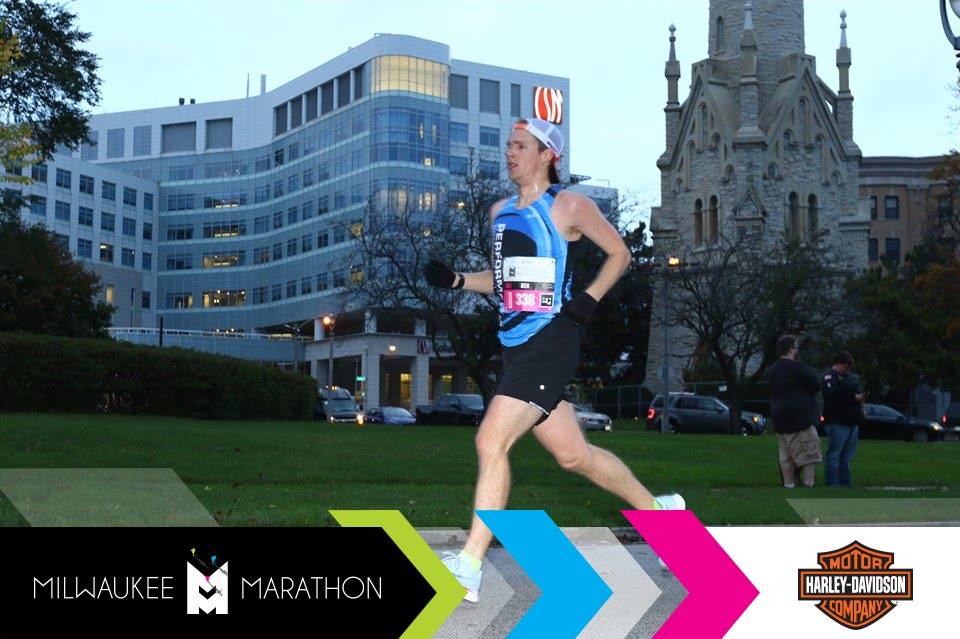 Disclaimer #1: I received free entry to the Milwaukee Marathon for being a member of the Performance Running Outfitters Pace Team. I’ll be pacing the 1:50 group for the Half Marathon

Disclaimer #2: I am promoting the Milwaukee Marathon as part of being a BibRave Pro. Learn more about becoming a BibRave Pro (ambassador), and check out BibRave.com to review and write race reviews. It’s fun.

It’s not a stretch to say I’m excited about the Milwaukee Marathon, all the more so since and we’re only a week from race day. I really want the race to succeed under its new ownership.

I’ve run the first and third versions of the race, and have run around Milwaukee itself plenty of times. If you live in the city, or run there frequently, you’ll be familiar with most of this route. If you haven’t run the Marathon recently, or aren’t as familiar with city’s geography, this course preview should be helpful. I’ll be breaking this into 5 mile segments:

The Half and Full Marathon will be starting at the same time again this year. It could be a bit crowded, but will also give you lots of pacing options with both Half and Full pace groups in the same spot.

The start (and finish) is at the new Fiserv Forum, the home of the Bucks, but once started we’ll promptly cross the river and head south on Water Street. This road was arguably the best crowd support area in the 2017 version of the race, and being close to the start I’d expect the same. We’ll get a little incline going over the river, but nothing too crazy at first.

We’ll make a brief turn onto Clybourn before heading over to Lincoln Memorial Drive, which runs along the lakefront. This takes us past the Art Museum and Discovery World, and will also be a nice and flat way to ease into the race.

Almost right at the 5k mark, we’ll hang a left and go up Water Tower Rd. This is the largest and steepest climb of the race. But at least it’s early.

The course runs along Wahl for a while before turning onto Lake Dr, and trends upward (elevation wise) almost this entire way. For a break, we turn for an out and back down Newberry Blvd, head down to Riverside Park, and then go back. Mile 5 is almost right at the turnaround.

We pick up with the “back” part of the Riverside out and back. Back onto Lake Dr. and away we go. The course winds around Lake Park, back to Lincoln Memorial, and down the hill to Bradford Beach. If you’ve run a previous version of the marathon (or run MKE a lot) you know this is a killer hill, so personally I’m THRILLED we’re going down it this year.

And yes, I know we run up a different one at Mile 3. Fine.

Anyway, once we’re down the hill, it’s back the way we came on Lincoln Memorial. This would be my spot to say “be careful” with the course. We get back onto flat lakefront roads at Mile 8. You’re warmed up, and probably picked up some speed coming down that hill; don’t get carried away if you’re in the Full Marathon. If you’re in the Half, then go bananas because it’s time to pick it up.

Like I said, it’s back the way we came here, and we’ll hit Mile 10 right as we turn back onto Water Street.

You thought since almost all of Miles 6-10 was back the way we came, that we’d be going back to Fiserv didn’t you? Wrong!

Almost right after Mile 10, we’ll hang a left and go up Wisconsin Ave. If the wind is from the west (like it was in 2017) this stretch is brutal. Wisconsin Ave is a gradual uphill that will do it’s best to grind you down.

The Half will run up to Marquette University, and turnaround at 13th St. The Half heads back down Wisconsin Ave (and gets a gradual downhill!), hangs a left back onto Water St (also the Mile 12 marker) and then back up Water St, across the river, and to the finish at Fiserv.

The Full keeps on trucking up Wisconsin Ave for a few (read: 12) more blocks before turning north on 25th. Conveniently, Mile 12 is also right at this turn. You won’t stay on 25th for long, though, as you quickly start heading west again on Highland. And yes, this is still a gradual uphill.

Around Mile 14, you’ll be running next to Washington Park. Thankfully, the Full doesn’t run through it this year. Last year it was confusing, and this guy almost had a tree fall on him. True story.

In my opinion, the northside of the park will be the most confusing section for marathoners. Runners will be coming from three directions, going to and from two different out and backs. What do you need to know coming around the first time? GO STRAIGHT. Just keep heading west down Lloyd St.

Honestly, I’m not sure what Mile 15 will look like. Previous races attempted to navigate us (poorly) through Washington Park. This year, the race is again omitting that (smart) and sending runners on another out and back around Washington Heights.

Remember that intersection I said would be confusing? You’ll be there again just past Mile 17. This time, you’ll hang a left and head north up Sherman Blvd. In 2017, I thought this section, along with Water St, had the best cheer sections.

This out and back goes all the way up to Townsend St before sending you back. And that’s the rest of this 5 mile section for the preview. Up and down Sherman. It’s mostly flat, so you won’t be staring down a long stretch of hills.

We pick up on Sherman again, because you’ll still be there at Mile 21.

But don’t worry, you’ll quickly make your third trip to the intersection of Sherman and Lloyd. This time, you’re heading back the way you originally came from way back at Mile 14. You’ll retrace your steps back around Washington Park and eventually onto Highland (Mile 23).

Around 24 you’ll hop back into Wisconsin Ave. Remember that grinding 20+ block uphill in the first half of the race? Now it’s a luxurious 20+ block downhill as you head back down the road.

From there, you’ll follow the same path as the half, basically. Back down to Water St and back around to Fiserv and the finish!

I mostly like the course layout this year. The only real hills are in the first few miles, and this year’s version will have significantly fewer confusing turns. I’m not so sure I would call this a “fast” course with all of the out and backs, but I’d wager you could run a solid time.

You haven’t signed up yet? Use the code RUN15 and save 15 percent on registration. Come join! 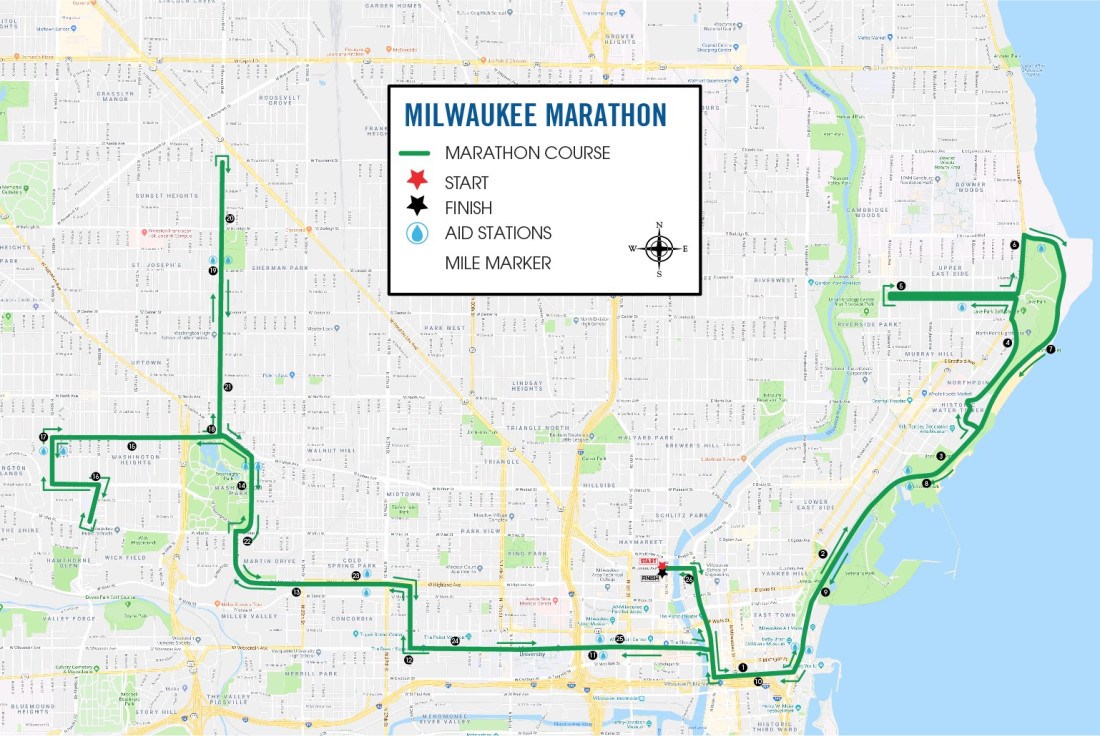