By Gretchen Schuldt, Wisconsin Justice Initiative - Mar 26th, 2019 01:37 pm
Get a daily rundown of the top stories on Urban Milwaukee 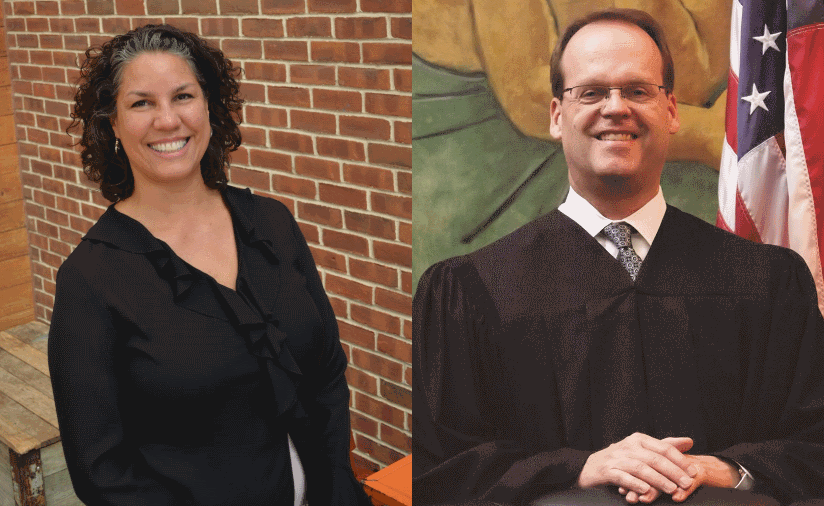 Danielle Shelton and Andrew Jones are competing for the Branch 40 judicial seat vacated by Rebecca Dallet when she was elected to the State Supreme Court in April 2018. Jones has held the seat since August, when he was appointed by former Gov. Scott Walker.

This is the only contested Milwaukee County circuit court race this spring. Shelton and Jones agreed to answer questions to better inform voters about the race.

Question: Name one of the best U.S. or Wisconsin Supreme Court opinions in the last 30 years and explain why you feel that way.

In Texas v. Johnson, 491 U.S. 397 (1989), the U.S. Supreme Court upheld a decision by the Texas Court of Criminal Appeals overturning the petitioner’s criminal conviction under a Texas statute prohibiting the desecration of the American flag. According to the Court, the petitioner’s conviction violated the First Amendment and thus was unconstitutional.

The petitioner (Johnson) burned a flag at the conclusion of a political march and demonstration through the streets of Dallas protesting the policies of the Reagan administration. According to the Court, given the overtly intentional political message of the flag burning, the nature of which would have been overwhelmingly apparent to any observer, the conduct was “sufficiently imbued with elements of communication” to constitute expressive conduct (speech) protected by the First Amendment. (Indeed, Texas conceded as much at oral argument.)

As such, the Court addressed the interests asserted by Texas to assess whether the law’s restriction on the petitioner’s expressive conduct was justified. The Court found that one purported interest – preventing breaches of the peace – was not implicated by the underlying facts, as no such breach had actually occurred, and the fact that some observers took offense at the conduct was insufficient to constitute such a breach. With respect to the second interest advanced by Texas – preserving the flag as a symbol of nationhood and national unity – the Court concluded that the purpose was related to the expression inherent in the petitioner’s conduct. As a result, the restriction on the petitioner’s expressive conduct was content based and subject to exacting scrutiny. Reviewing prior precedent in which it had held that punishment for using words critical of the flag is prohibited and that the government may not compel conduct that reflects respect for the flag, the Court held that the fact that the government cannot prohibit expression it disagrees with is not dependent on the mode of expression. According to the Court, to uphold the petitioner’s conviction would be to enter “territory with no discernable or defensible boundaries” by permitting a designated symbol such as the flag to be used to convey one (positive) set of messages but not another (negative).

In my view, the Johnson decision represents an instance where the Court ruled in a manner compelled by the First Amendment notwithstanding the fact that the speech in question was and is abhorrent to many. The decision reflects both a core value of this nation and our American society – freedom of thought, speech, and expression from government intrusion – and the critical role the courts (from the Supreme Court down to state and federal trial courts) play in our system of government – the faithful application of the law consistent with the Constitution, whether or not it is popular or even true to a particular judge’s personal beliefs.

Georgia v. Randolph, 547 U.S. 103 (2006), held that the police cannot conduct a warrantless search in a home where one occupant consents and the other objects. Justice David Souter, in the majority opinion, compared the reasonableness of such a search to a more casual interaction. Souter wrote, “it is fair to say that a caller standing at the door of shared premises would have no confidence that one occupant’s invitation was a sufficiently good reason to enter when a fellow tenant stood there saying, ‘stay out.’ Without some very good reason, no sensible person would go inside under those conditions.” A police search in such circumstances, Souter wrote, would therefore not meet the reasonableness requirement of the Fourth Amendment.

I am critical of any erosion of the right of the people to be secure in their persons, houses, papers, and effects, against unreasonable searches and seizures.  A great deal of my career has been spent protecting people against government intrusions, so I appreciate the U.S. Supreme Court protecting our rights.

Second Question: Name one of the worst U.S. or state Supreme Court opinions in the last 30 years and explain why you feel that way.

Citizens United v. Federal Election Commission, 558 U.S. 310 (2010), held that limits on corporate and union political expenditures during election cycles violate the Free Speech Clause of the First Amendment. Corporations and labor unions can spend unlimited sums in support of or in opposition to candidates as long as the spending is independent of the candidates.

The contradiction is that the Supreme Court required electoral districts to be drawn with roughly equal populations because the Constitution “demands” that each citizen have “an equally effective voice.” Hence, “one person, one vote.” Yet, when corporations, or other big money spenders, are able to flood the airwaves with their messages, they can effectively drown out the voices of other citizens, whose democratic right to political speech deserves no less protection than those with financial resources. This undermines the political equality that gives our government legitimacy.

In Kelo v. City of New London, 545 U.S. 469 (2005), the U.S. Supreme Court addressed the issue of whether the City of New London, Connecticut’s use of the power of eminent domain to acquire private property to be used for development by other private parties as part of a large-scale redevelopment plan approved by the City violated the Takings Clause of the Fifth Amendment.  Specifically, the Court addressed the question of whether the use of eminent domain for such a purpose qualified as a “public use,” as would be necessary for it to satisfy the Takings Clause.

Acknowledging that the City’s use of eminent domain to take private property for the purpose of conferring a private benefit on a particular private party would not constitute such a “public use” and would be an unconstitutional taking, the Court nonetheless ruled in Kelo that the use of eminent domain to take the property in question was constitutional because the underlying redevelopment plan of the City served a “public interest.”  In reaching this conclusion, the Court reasoned that prior precedent defines what serves the “public interest” broadly and requires significant deference by the courts to legislative decisions about what does and does not serve the public interest.

I believe the majority’s holding in Kelo is flawed in that it too broadly defines what may constitute a “public use” for purposes of the Takings Clause and is too deferential to legislative determinations about whether or not a particular taking of private property serves the public interest.  As Justice O’Connor reasoned in her dissenting opinion, the majority’s holding opens the door to all private property being taken by a local government and transferred to another private property owner as long as the local legislative body deems the use proposed by the new owner to be more advantageous to the public.  Further, as Justice O’Connor’s dissent further reasoned, “an external, judicial check” on the use of eminent domain under such circumstances is necessary if the Takings Clause is to have any meaning.  Otherwise, as the dissent pointedly noted, “[n]othing is to prevent the State from replacing any Motel 6 with a Ritz-Carlton, any home with a shopping mall, or any farm with a factory.”

More About the Candidates

Jones’ resume is here. Personal information, such as telephone numbers, personal email addresses, and the names of people not directly involved in the campaign have been redacted. And the candidate’s website: https://www.judgeandrewjones.com/

Shelton’s resume is here. Personal information, such as telephone numbers, personal email addresses, and the names of people not directly involved in the campaign have been redacted. And the candidate’s website: https://www.sheltonforjudge.com/