Blue Star Cafe Is a Star 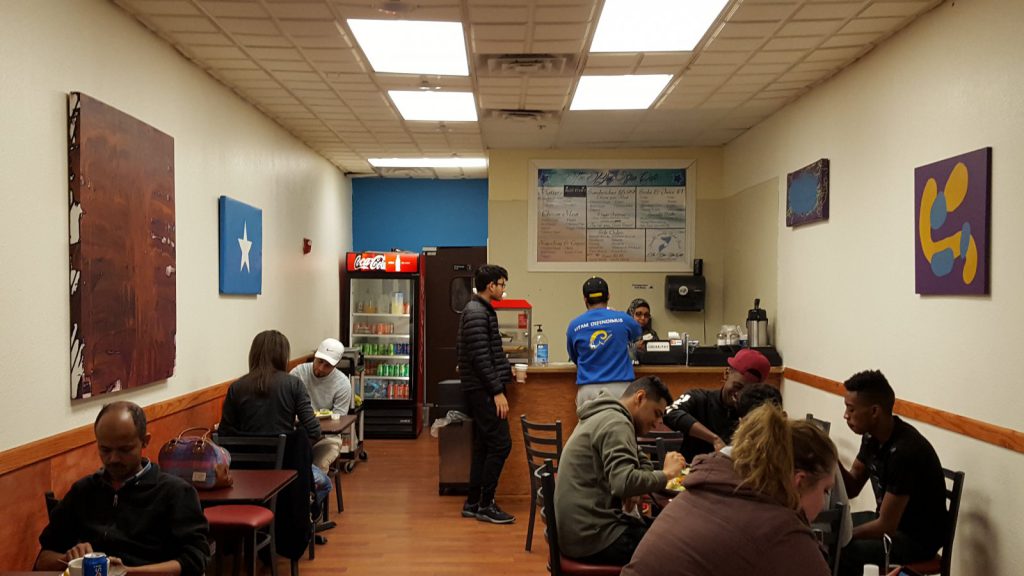 Blue Star Cafe is hiding in plain sight on Farwell Ave., just south of Brady. What you see as you drive by, and that’s how most of us travel down Farwell, is signage for H & R block. Look closely at that brick building and you will spot a tiny café where they serve some killer Somali food at ridiculously low prices. How they stay in business when they give customers so much good food for so little money baffles me, but they’ve been there for seven years. That says they know what they’re doing, because, as we know, when you serve great food, people will come.

Inside, half a dozen tables, an oddly situated TV, and some nice art defines this small space. After two lunches, I can say with some authority, everything my companions and I tasted had bold, bright, fresh, and unique flavors in every bite. They use a lot of lemon which accounts for the tart edge we found in many dishes, especially the hummus.

This appetizer, served in a large bowl, was so attractive we almost didn’t want to disturb the art of the sliced tomato, sliced cucumber, the circular drizzle of olive oil and for color, a sprinkle of sweet paprika. They served it with two large circles of lightly toasted pita, cut into eights. The pita was both crunchy and spongy, an ideal platform for the lemony hummus. They made the pita in house as well as the crepe I ordered to wrap the spinach-veggie side, one of several sides that included pasta, rice, noodles, extra beef or goat, and a side salad.

The spinach-veggie combo was the only disappointing dish I tasted. I attribute that to the Somali diet, based primarily on meat, rice, and pasta, and not on vegetables. The crepes, however, slightly sweet and thicker that a French crepe, made a nice package for the spinach mix.

No one should leave Blue Star without ordering at least one Sambusa. Every culture has some variety of dough stuffed with meat such as empanadas, momo, pierogi, and at Blue Star, the Sambusa. They stuff the dough with a choice of beef or chicken, and serve it with a green sauce, a cross between pico de gallo and chimichurri. My Sambusa, stretched to its limits, contained chunks of curried chicken, some tiny pieces of potato, and a few peas. When combined with that green sauce, a spicy mix of jalapeno, garlic, onion, and lemon, it was a bundle of bright, fresh, complex flavors,

What makes the food at Blue Star special are the spices. We found hints of curry, cinnamon, cumin, cardamom, and garlic, in all the dishes we sampled.

Even the salmon which my companion ordered from Create Your Own Platter, had a breath of curry. It was also perfectly done, served on a bed of pasta, and topped with caramelized onions, fried potatoes, and slices of sautéed green pepper. Like everything we ordered, it came with a serving of the green sauce, plus yogurt, and a slice of lemon. Those three together added an enticing combination of silky cool, spicy hot, and lemony tart, giving each dish a fascinating potpourri of diverse flavors.

I found the meat on the Beef Platter, my choice, served with those same potatoes, onions, and peppers, as tender as my mom’s pot roast, not a tough bite on the plate. There was enough meat for a second meal at home. Even the base, basmanti rice, hinted of cumin and cinnamon, raising it above your average boring rice.

It’s hard to pick a favorite, but mine might be the Chicken Platter, and here’s why. My companion chose Kay Kay for the base, fried flatbread, delicious in itself, and even more so, as it absorbed flavor from her curried chicken.

All the platters came with a small salad, crisp lettuce dressed with a light lemony vinaigrette.

You can also order a sandwich for $5.99, an eight-inch sub with, according to a companion, the best sandwich bread she’d ever had. The bread, a combination of crunchy and soft, made eating the crisp well-seasoned tilapia, an unexpected pleasure. The bread for the subs is the only bread they don’t make in house.

Not to be overlooked are the drinks. We tried the Mango Smoothie, The Watermelon Juice, and a house favorite, Chai Tea. The smoothie was pure pureed mango, with no fill; the watermelon juice tasted of summer; and chai tea was a soothing hot antidote to a cold January day.

They also do a brisk take-out business as evidenced by a steady stream of customers coming and going.

This little restaurant is a gem. 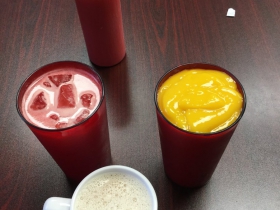 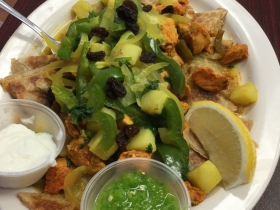 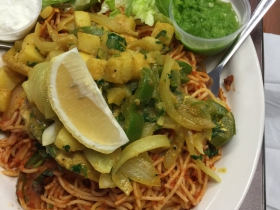 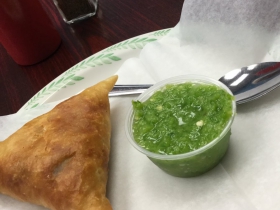 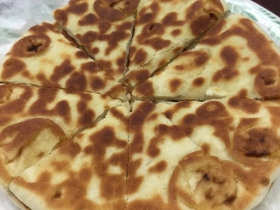 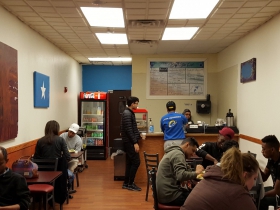 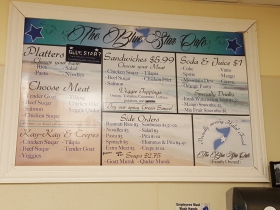 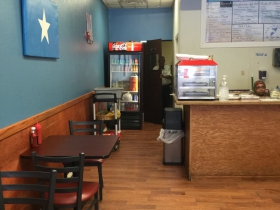 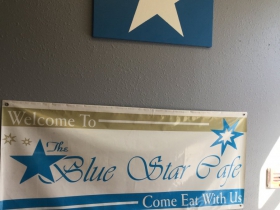 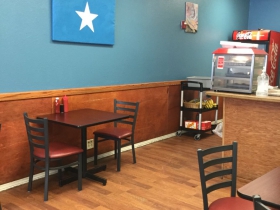 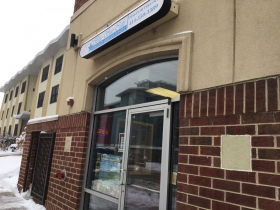